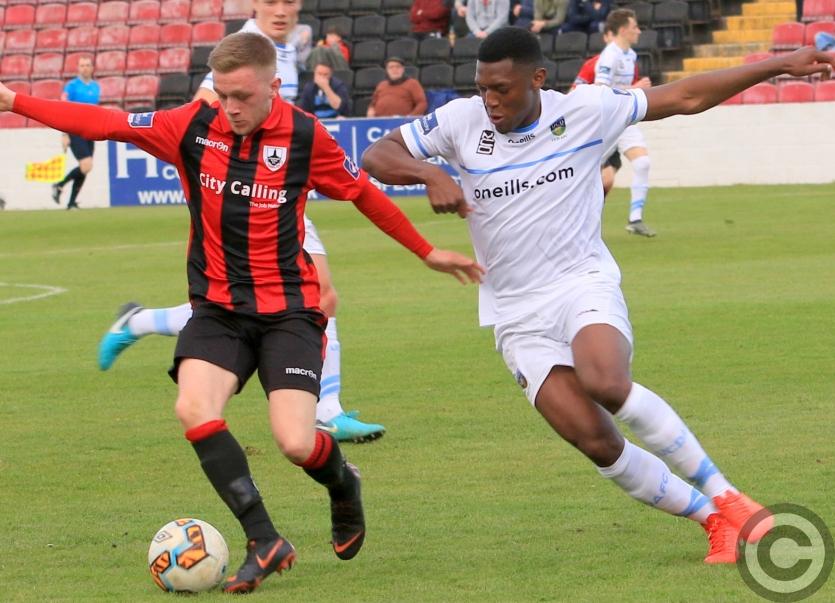 After a very disappointing performance and an equally disappointing result against table toppers UCD in the league last weekend, Longford Town manager Neale Fenn will have to conjure up something special as they face Finn Harps at City Calling Stadium this Saturday night, kick-off 7.30pm.

After the defeat by UCD the Town are still in fourth place in the table on 12 points, the same as Galway United but have a better goal difference. Harps are on 11 points but both they and Galway have a game in hand on Longford.

UCD are the pace setters at the moment on 19 points which is a great return from eight games and they are closely followed by Drogheda United on seventeen points and Shelbourne who are in third place a further point adrift.

Drogheda, who were so lucky to pick up a point against the Town the previous weekend when they scored the equaliser with ten seconds remaining in stoppage time, were one of the big scorers at the weekend.

They travelled to St Colman's Park and came away with a comprehensive 5-1 victory over Stephen Henderson’s Ramblers outfit.

Shelbourne, who are rumoured to be in the process of a half million takeover, also had a very impressive victory over Galway United at Tolka Park.

Former Town striker Davy O'Sullivan kept up his good form with the all important second goal for Owen Heary's fast improving Shels side.

At this stage of the season any one of six teams could win the automatic promotion spot as most of the teams in the league are capable of beating each other.

The games this weekend will start the second phase of fixtures in the First Division. Finn Harps have potentially the best team in the Division as they held quite a few of the team that were relegated from the Premier Division last season. Admittedly they have lost some of the more experienced players and many would say Harps were so unlucky to be relegated.

Keeper Ciaran Gallagher is undoubtedly one of the top netminders in the Division. Aidan Friel, who was with the Town last season is a very experienced defender who has great strength and lots of stamina.

Keith Cowan and Ciaran Coll have many years of experience in the Premier Division and they will be hard to get past as their goals against column reads as they have only conceded seven goals in seven games.

Young loanee Sam Todd who is on loan from Derry City is doing very well in defence for Harps. Two weeks ago Harps were beaten 3-2 by UCD at the College Bowl and lethal striker George Kelly, who is from Co Donegal, scored a hat-trick.

Last weekend Harps beat Cabinteely 1-0 at Finn Park and midfielder Coyle got the all important winning goal. Local lad Coyle is only 21 years of age but he is gaining great experience from his very experienced team mates.

Paddy McCourt needs no introduction to soccer followers in the midlands as he has played cross channel and has represented Northern Ireland on the international scene.

Mark Timlin is a very experienced winger who has played in the League for many years and he needs to be very closely watched.

Up front against Cabinteely were Michael O'Connor and Jesse Deevers who have great potential but possibly are lacking in experience. Harps have quite a few players on loan this season and maybe that is the correct way to go for the smaller clubs.

Harps have vastly experienced striker John O'Flynn on the bench and he could be the man to push them up the table as they chase a quick return to the Premier Division.

Harps also have two strikers on their books and they very rarely play together. Michael O'Connor started on the team while his namesake Ciaran O'Connor was on the bench. The O'Connor's (no relation) are two very good young players who are with Harps for experience, on loan from champions Dundalk and Shamrock Rovers.

Both those two players are very strong and could be the players to kick start Harps as they look to get promoted.

The Town management will not be happy with the performance against UCD. Keeper Jack Brady must be counting himself unlucky not to get a run at no 1 as he didn't do anything wrong when he was playing last season.

The Town went into the UCD game on Saturday night last minus four regulars. Shane Elworthy and Peter Hopkins, who had to be replaced in United Park, missed the UCD game due to injury and could also miss the next two games and they are very hard to replace.

Defender Alan Kehoe is still out along with midfielder Shane O'Connor. On the plus side the most experienced player in the Town squad Darren Meenan has regained full fitness and we will be expecting a big game from the former Dundalk star.

The Town lost their unbeaten home record on Saturday night last when the college boys were the best team in the league fixture but hopefully Longford can score a win over Finn Harps.