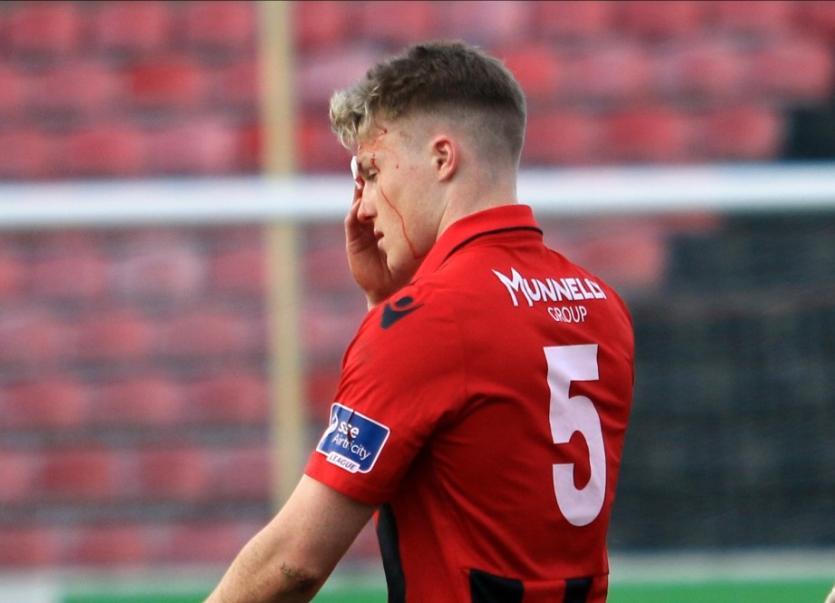 Longford Town defender Daniel O'Reilly leaving the pitch last Saturday after suffering a head injury in the early stages of the clash against Cabinteely but he is fit to face Drogheda. Pic: Syl Healy

Only four points separate the top five sides but fifth placed Galway on nine points do have a game less played than the top four. Drogheda lead a three-way tie at the top-of-the table on thirteen points ahead of Shelbourne and UCD on goal difference with Longford Town two points further back on eleven points.

Drogheda and Longford Town have both lost one of their opening six matches to date, ending up with nine men on the pitch. Longford lost 3-2 away to Shelbourne at Tolka Park courtesy of a last minute penalty converted by former star player and club record goalscorer, David O'Sullivan, which completed his hat-trick in his first match against the Town since leaving the club at the end of last season.

Drogheda's only defeat was a surprise 3-2 loss away to Cabinteely two weeks ago but the Co Louth club  are on fire in front of goal in this year's First Division campaign as they have scored two goals plus in each of their six league outings to date.

Drogheda ran riot at Ferrycarrig Park registering an 8-1 victory over Wexford FC and they also put six past Athlone Town in a 6-0 home triumph. So the Town defence will have their hands full in their bid to keep a third consecutive clean sheet after an impressive 0-0 draw away to Galway and last week's 3-0 home win against Cabinteely.

During the week, Drogheda advanced to the second round of the EA Sports Cup beating Leinster Senior League side Saint Mochta's 3-2 at United Park with former Longford Town players Kealan Dillon playing the full 90 minutes in midfield and striker Lee Duffy an unused substitute. Another former Town player, keeper Paul Skinner, will probably start in goal for the home side on Friday night.

As well as the former Longford Town players, Drogheda possess plenty of experience and talent in their ranks with the likes of Sean Brennan, Richie Purdy, Jake Hyland and Chris Lyons all capable of doing damage, while Mark Doyle, Gareth McCaffrey and youngster Eoin McPhillips are also quality players to watch out for.

Longford Town are not quite at full strength as Alan Kehoe and Shane O'Connor will both miss Friday's encounter but Dylan McGlade is available again after serving his suspension and his return to the squad is very welcome. Centre-half Daniel O'Reilly is fit for selection after receiving seven stitches in last week's contest that resulted in his 16th minute substitution and that is a further boost for manager Neale Fenn.

Although he did not score against Cabinteely, striker Chris Mulhall has been in electrifying form this season for the 'Red & Black', while Dean Zambra, Sam Verdon, and Daniel O'Reilly will be key to the visitors cause.

Also in excellent form for Longford Town this season are the two local players Aodh Dervin in midfield and Tristan Noack-Hofmann in the defence, which is a massive boost for the club, the fans, and the locality's underage players with both Longford Town FC and the Longford and District Schoolboy/Girl Soccer League.