Longford Town in action against Shelbourne at Tolka Park 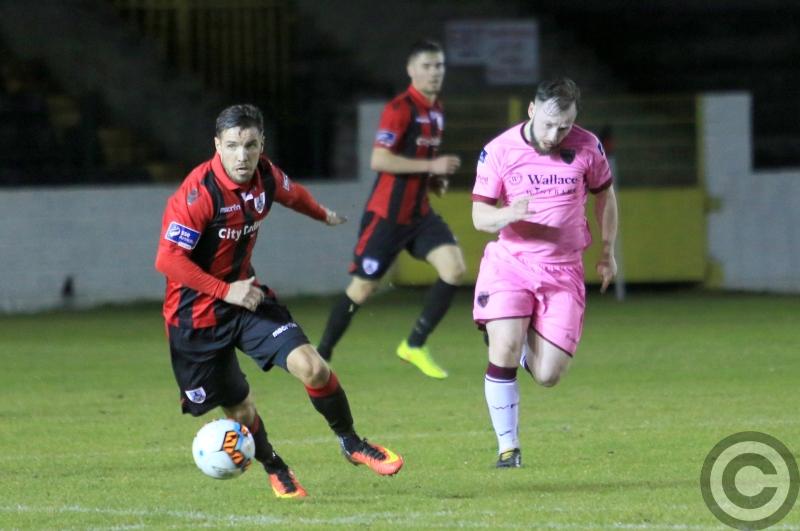 Longford Town are in action against Shelbourne at Tolka Park this Friday night (kick-off 7.45pm) to play Owen Heary's experienced side who many think will be challenging for one of the play-off spots if not the automatic promotion place in the First Division.

Shels manager Heary is one of the most decorated former League of Ireland players as he has amassed a huge amount of medals from a very successful career as a player.

Owen managed Bohemians in a caretaker capacity and after leaving Bohs he managed Sligo Rovers and then he returned to Shelbourne.

He is the manager there since June 2016 when he replaced Kevin Doherty in the hot seat. Last season Longford Town and Shels met on five occasions, four times in the League and once in the League Cup (EA Sports Cup).

The opening game of the season was played at Tolka Park and the game ended scoreless with both defences on top for long periods.

The second game between the clubs in mid-April was played at City Calling Stadium and on that occasion the Town had an emphatic 3-1 victory.

Shelbourne opened the scoring after only three minutes when Dayle Rooney was on target but after 16 minutes the Town were back on level terms with Enda Curran getting the goal.

Striker Curran added goal number two from the penalty spot but Shels upped their game in the second half and were causing problems for the Town defence.

Just past the hour mark the Town scored their third goal through Kevin O'Connor who found the back of the net with a fine strike from over 20 yards out. The next meeting between the clubs took place in the first week in June and that ended 0-0.

The final league meeting between the clubs was played at the end of July and ended in a 3-1 win for the visitors Shelbourne who were well on top throughout the game.

The Town took the lead after only 8 minutes and it was a cracking header from young Tristan Noack Hofmann who gave Shels keeper Dean Delaney no chance from close range.

The visitors got back on level terms when Jamie Doyle scored and took the lead in the 64th minute with a well-taken effort from Adam Evans.

The killer blow came in the 85th minute when Reece McAteer scored the third goal for Shels.

The other meeting between the clubs last season took place on Easter Monday in the EA Sports Cup at Tolka Park. This game gave both managers a chance to give members of the squad a run out but also look to advance to the next round.

The Town had a fairly strong team on the field with six first team regulars in the squad. Gavin Boyne, who will be in the Shelbourne squad on Friday next, gave the Town the lead in the 39th minute.

Boyne, who joined the club from Shelbourne for the 2017 season, was unlucky on occasions not to get into the starting eleven every week but he never let the management down when introduced or starting.

The second and very important second goal came from Dylan McGlade in the 75th minute and that put the Town in a very favourable position as the final whistle approached. Dylan was also a former Shelbourne player.

While this is a new season and many players have departed from the club it will undoubtedly take some time for the new look squad to blend in together.

The current Town squad have twelve new faces but its a work in progress and one has to hand it to Neale Fenn for his great work with the current players.

The team that started against Wexford had one enforced change as Alan Kehoe was injured and could be out for a few weeks.

Luckily for manager Fenn he had a ready made replacement in Tristan Noack Hofmann who did so well at left full last season. One would have to say that both Tristan and Jack Brady could count themselves very unlucky not to be in the starting eleven after their performances last season and also in pre-season.

Brady, who took over from last year's no 1 Paul Skinner in the summer and did so well, could count himself more than a bit unlucky while Arva lad Tristan could also have the same grievance.

We can all have opinions but in the end the manager has to take all the decisions and one would have to say that our form to date has been very good and four points have pushed us to the top of the table.

One has to say that the performances of striker Chris Mulhall to date have been excellent. Having three goals to his name at this stage is a big plus for the club after losing Davy O'Sullivan to Friday's opponents Shelbourne. Chris is a different type of player than Davy but both are excellent goalscorers.

Sam Verdon is so unlucky in some games since he joined the club last summer as his touch lets him down on occasions but his shot from about 25 yards cannoned off the post with keeper Bolger beaten.

In many games the former St Pats player was so unlucky not to add to some of his spectacular goals and no doubt he will score many important goals this season.

Former Newbridge player Mick McDonnell has done well alongside Daniel O'Reilly in the centre of the defence as he got the nod over former Shels defender Adam O'Connor who missed a few games through injury. He was on the bench on Sat night last and that will strengthen manager Fenn's hand when it comes to team selection.

Shane Elworthy is doing very well at right full and his run and cross for Chris Mulhall's opener was really top class. To score three goals and hit the post on a few occasions against a useful Wexford squad that beat  Cabinteely in the opening round of fixtures shows that the team mean business and we hope we are still in the chase for promotion in September.

Mulhall scored two very good goals but Dylan McGlade who rejoined the club after a stint in England also showed that he has a lot to offer after replacing Darren Meenan just past the hour mark. Dylan put a lot of pressure on the visiting defence after his introduction and topped a superb performance with goal no 3 after Wexford defender Kenny headed a cross against his own post and Dylan blasted the rebound past the helpless opposing keeper Bolger.

Alan Kehoe is  the Town's only absentee tonight (Friday) due to injury and there is no doubt that Shels will be a hard opposition to beat. Last weekend they travelled to Finn Park and came away with a share of the points. On loan striker Michael O'Connor gave the home side the lead after 16 minutes but Shels struck back before half-time with an equaliser from former Town player Davy O'Sullivan who scored after 42 minutes.

Both teams cancelled themselves out in the second half and both were happy to settle for a point. The Shels team that started against Harps has an abundance of experience and skill.

Keeper Dean Delany has years of European experience but he may be in the twilight of his career. The defence are a very experienced outfit with the exception of full back James Browne who is only around 20 years old.

Dave Mulcahy who has played for many clubs is also in defence and his experience will spread through the team. Dave may be 39 but he is a very fit player as is another defender Aidan Collins who has huge experience. Lorcan Fitzgerald reads a game very well.

Former Town player James O'Brien is the main man in midfield where he is partnered by Jamie Doyle.

Up front is where the danger lies with former Town player Davy O'Sullivan bearing the main threat for Shels while his partners up front James English and Alan Evans are very useful players.

Make no mistake about it this is going to be a stern test for this new look Town side and it will take a valiant effort to get three points.

No doubt we will have a big vocal support at Tolka on Friday night and this game will give us a better idea as to how we have progressed under Neale Fenn.