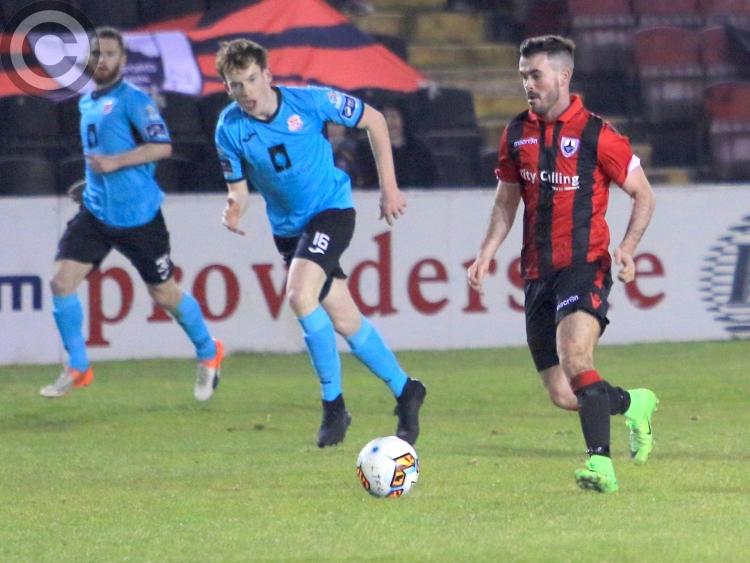 Longford Town play their second home game of the season on this Saturday night when Wexford come to City Calling Stadium, kick-off 7.30pm.

Last weekend the Town like all the other 19 clubs in the Airtricity League were idle due to the awful weather conditions and no doubt both clubs will be looking forward to this match.

In their opening game of the season Wexford played Cabinteely away and despite being underdogs they came away with a merited 1-0 victory with the only goal of the game coming from central defender Sean Hurley who scored in the 8th minute.

The fact that the visitors took the lead so early might have put pressure on this young Wexford team but they defended valiantly for the remaining 82 minutes and came away with three valuable points.

The teams clashed on four occasions last season and the Town were on top in most of these games. The Town drew one and won the other three games keeping three clean sheets against one would have to say was a mostly inexperienced Wexford team.

Last season Damien Locke was appointed as the new manager of the club due to the fact that previous manager Shane Keegan left to manage Galway United.

Locke is doing a fine job for Wexford especially when most of his squad are amateur players.

The first meeting between the clubs last season was in early April at Ferrycarrig Park and this game ended 0-0 which wasn't very pleasing for the away supporters.

This was the seventh league game of the season and the Town could only muster four goals in that period with Davy O'Sullivan scoring three of them in the game against Athlone.

This was a game that the Town would like to forget as there were many glaring misses along with injuries to the club's most experienced players Davy O'Sullivan and Don Cowan, both of whom were replaced at half-time by Dylan McGlade and Jake Kelly.

Longford’s other striker Enda Curran missed a few sitters as the Town tried to get the three points.

Failure to score meant that the Town were eight points behind the league leaders Waterford at that stage who we all know went on to win the league and promotion to the Premier Division where they currently sit proudly in second place behind leaders and reigning champions Cork City.

After drawing a blank in the opening game at Ferrycarrig Park the second meeting at City Calling Stadium was a completely different game with the Town coming out on top with a 5-0 victory.

The Town went into that game with manager Alan Matthews under a lot of pressure as results weren't helping his cause with the team a whopping thirteen points behind league leaders Waterford.

To add to the under pressure manager's position Matthews went into the game minus the experienced Davy O'Sullivan, Don Cowan, Enda Curran and Cody Mulhall all of whom were proven goalscorers.

Despite all the missing players the Town got off to a tonic start when Dylan McGlade blasting to the net past keeper Graham Doyle as he connected to an excellent Kealan Dillon cross.

After the early goal the Town were struggling to get the second goal and this came after the Wexford keeper could only parry a Gavin Boyne shot and the ball fell invitingly to Dean Zambra who blasted past Doyle to give the Town a comfortable 2-0 lead.

The Town were very dominant and in complete control and team captain Kevin O'Connor fired home goal number three in the 53rd minute. It was all Longford at this stage and it was no surprise that the Town would add to their tally, such was their dominance they were enjoying.

Current club captain Dean Zambra got his second of the game and the Town's fourth when he burst through and shot past the opposing keeper Doyle. The final goal was a real cracker as Jake Kelly set up Kealan Dillon who scored a superb goal to take the Town's tally to five.

This game marked the return to the first team of Noel Haverty who had missed quite a few games due to injury and his return was a great boost for the management. This fixture marked the arrival of Aodh Dervin from the under 19s and he replaced team captain Kevin O'Connor in the 81st minute. His appearance on the pitch was a big boost to all the younger players after he starred with the under 19s team.

The next meeting between the clubs was played in Ferrycarrig Park and a much stronger Town squad were in the mood to take three points from the Wexford venue. Noel Haverty and Don Cowan were back to full fitness and started the game. In fairness to the home side should have taken the lead as both Aaron Dobbs and Dean Kelly had shots well saved by Paul Skinner. These chances were early in the first  half but the Town settled down and it was no surprise when they took the lead in the 36th minute.

New signing Sam Verdon directed an excellent header past keeper Corey Chambers in his opening game for the Town.

Longford increased their lead five minutes into the second half when Jake Kelly's corner was blasted to the net by Tristan Noack Hofmann to give the Town a good lead but top goalkeeping and bad finishing meant that the Town were stuck on two goals.

The home side punished the Town for their lack of accuracy in front of goal when one of Wexford’s best players Thomas Croke found the back of the net with a long range strike.

The Town were down to ten men with 15 minutes left on the clock as substitute Kealan Dillon, who was only brought on a few minutes earlier, was shown the red card. Both teams had their chances in the final minutes but the Town held out for a great victory.

The final meeting between the clubs at City Calling Stadium in early October was the last  game of the season and Town manager Neale Fenn was hoping to continue the dominance over Wexford.

Once again injuries deprived manager Fenn of quite a few regulars. Noel Haverty, Kevin O'Connor, Don Cowan and Rhys Gorman all missed the game but manager Fenn, who was already planning for the new season, didn't mind having young inexperienced players in the team for this game.

This Town team had a very youthful look about it and they showed that they meant business from the kick-off. The only goal of the game came from the head of Davy O'Sullivan who gave Wexford keeper Danny Bolger as he headed Karl Chambers excellent cross to the net.

The Town won the game but their dominance for long periods meant that they should have scored at least another two or three goals.

The current Town team will need to play well to take three points on Saturday evening from the new look Wexford side who are always a tough nut to crack. The Town have been impressive since the arrival of Neale Fenn and he is urging them to play attractive attacking football.

After missing a game (v Finn Harps) due to the inclement weather it will be hopefully another victory for Neale Fenn's new look team.

On the Town team news front, pre-season signing Andy O'Reilly has departed the club while versatile left-sided player Alan Kehoe will miss the next few games as he went over on his ankle during Tuesday night's training session.