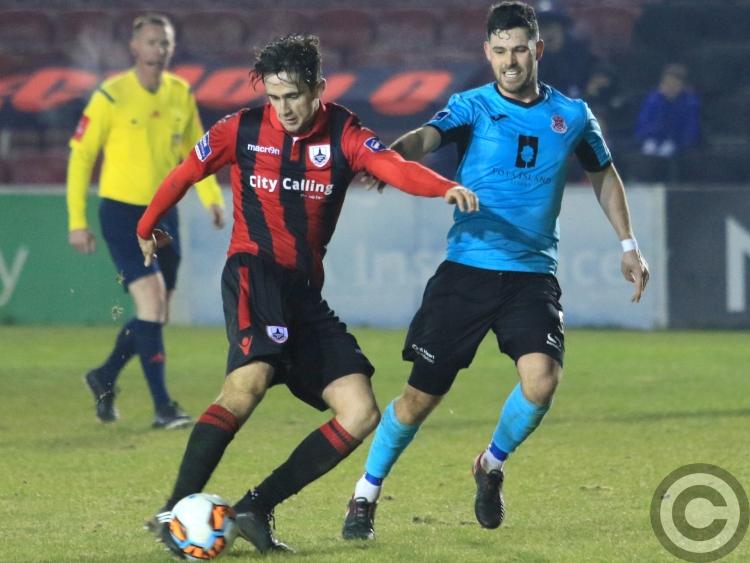 Longford Town blew a glorious opportunity of collecting all three league points in the opening First Division fixture of the 2018 season when they let victory slip from their grasp in the eventual draw against Cobh Ramblers at City Calling Stadium on Saturday night last.

After producing a good performance in the first half to lead 2-0 at the break with Chris Mulhall (5th minute) and Dean Zambra (43rd minute) scoring the goals, Neale Fenn’s side appeared to be in total control with their attractive brand of attacking football certainly pleasing the enthusiastic home supporters among the official attendance of 575.

Sam Verdon then had a great chance of putting the issue well and truly beyond all doubt in the 62nd minute when his close range effort to find the back of the net was saved by Paul Hunt,  the former Town keeper.

Cobh were thrown a lifeline when substitute Andrew Wall scored from a firm header in the 65th minute, connecting with a corner from Darren Murphy, and that proved to be a big boost for the revitalised visitors who went on to snatch the equaliser in the 81st minute.

A costly mistake by Longford defender Michael McDonnell was punished by Cian Leonard who pounced on the loose ball to direct a well struck low shot into the corner of the net past the opposing keeper Michael Kelly.

The Town were stunned and while they staged a frantic late bid in trying to score a winning goal it failed to materialised with pleas for a penalty (handball) turned down by referee Damien MacGraith after Shane Elworthy fired a right wing cross into the box.

While it was a disappointing result in the end, the midlanders can take some positives out of the game with new striker Chris Mulhall clinical with the finish for the opening goal in the 5th minute.

When the Town were gifted the second goal just before the break with Dean Zambra capitalising on poor Cobh defending to hit the target from a few yards out it looked all over as a contest but lack of concentration allied to some inexperience allowed the Cork club back in contention.

It seemed that new look Longford were going to enjoy a great start to the season when a McDonnell pass picked out Mulhall and he showed great composure to plant the ball in the back of the net from close range with just five minutes gone on the clock.

While Cobh were almost back on level terms in the 14th minute when Longford netminder Michael Kelly produced a point-blank save to deny Cian Leonard, the home side gradually upped the tempo during the remainder of the first half and went so close to scoring a second goal in the 35th minute.

Centre half Michael McDonnell, joining the attack yet again, had a shot cleared off the line by Ramblers defender Adam O’Sullivan and while the constant Town pressure paid off when Dean Zambra pounced to finish the ball to the net the danger should have been cleared.

That looked like a shattering blow for Cobh and it could have been even worse as Darren Meenan wasted a good chance for Longford when shooting straight at Paul Hunt from a tame effort in the 36th minute.

While Cobh closed the gap with the goal from Wall, the Town could have regained a firm grip on the game when Chris Mulhall had a shot blocked down inside the box in his attempt to score a killer third goal in the 67th minute.

That gave Cobh hope and Cian Leonard was the saviour with his strike that yielded the equaliser to leave Longford Town wondering how they somehow failed to emerge victorious.