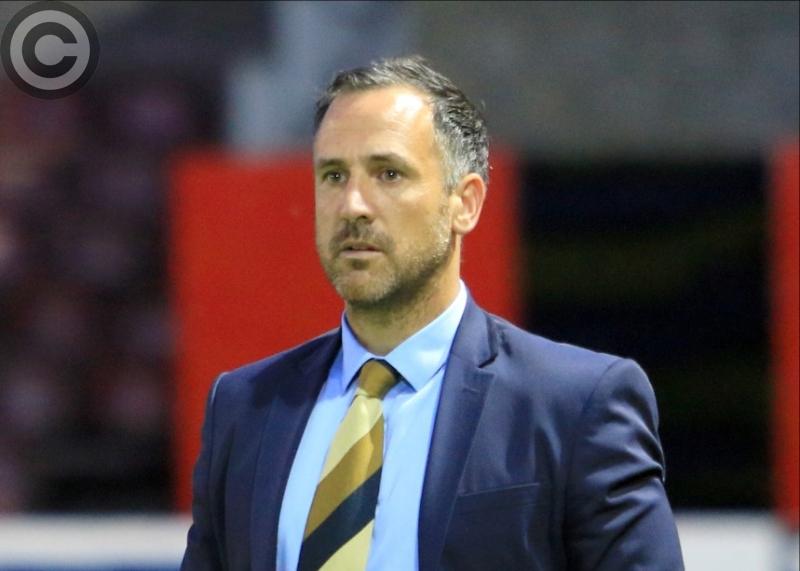 Longford Town manager Neale Fenn, all set for the new season which kicks-off against Cobh Ramblers at City Calling Stadium this Saturday night.

Having come into the club midway through last season and with promotion out of reach, new Longford Town manager Neale Fenn used his time getting to know the First Division along with overseeing a tremendous FAI Cup win over Sligo Rovers.

Looking ahead to the start of the new season Fenn told the Leader he was glad to get the opportunity to come into the club last season.

“The most important thing for me is that I got to look at other players and other teams. My knowledge of the First Division would not have been great when I was appointed the manager of Longford Town.

“From that opportunity it was good to see what was going on. The other side to it is when you first get the job it’s new, now I know the league and I am all set for the task.”

The squad that Fenn has assembled are mostly players he has brought into the club and admitted there were a few other signings he would have liked to have made this season.

“There are players who have left that I didn’t want to leave and there were players I tried to get that did not work out. I have signed most of the squad that are here now and we have been able to work with them for two months now, getting a better idea of how we work and what they are best at.”

With the First Division switching to 10 teams this season, along with the return of the always exciting play-offs, there is more than one chance of getting promoted.

Having said that, it is going to be a tough challenge and particularly so with Galway United, Finn Harps and Drogheda United in this league now following their relegation from the top flight last season.

“I look around and there are players I am surprised to see at different clubs and other players you think they will do well with the club they are at.

“Every game is going to have its own challenges and it is going to be a very competitive league this year. You look at the teams that have come down who will want to go straight back up so it is hard to pick a favourite for the automatic promotion slot,” stated Fenn.

The Londoner is coy about the promotion opportunity for the Town this season but he does hope that they will be challenging at the top of the table.

“We hope we will be up there. We are going out to try and win every game in the quest to be involved in the shake-up for promotion.

“We are confident with the squad we have and if we play to our potential we can be contenders which is every manager’s wish.”

Longford’s first game of the 2018 season is on Saturday night at home to Cobh Ramblers who surprised many by finishing runners-up in the First Division last season.

“It is good to get a home game first to kick-off the new season. We are playing the team who were second last year so it is going to be tough.

“It’s about making sure we are prepared as well as we can be for the opening fixture on Saturday.”

Neale Fenn hopes that the Town fans will come out in big numbers on Saturday night to support the team against Cobh as he revealed plans the club have for the season.

“We are a small club and need everyone behind us and I will try to do my bit with the social media aspect.

“Getting the players in after games to the bar area to mingle with the fans is another objective. We will be doing more of that this year in going to pubs and supporting our sponsors while we also plan to have a couple of open days at the ground.”