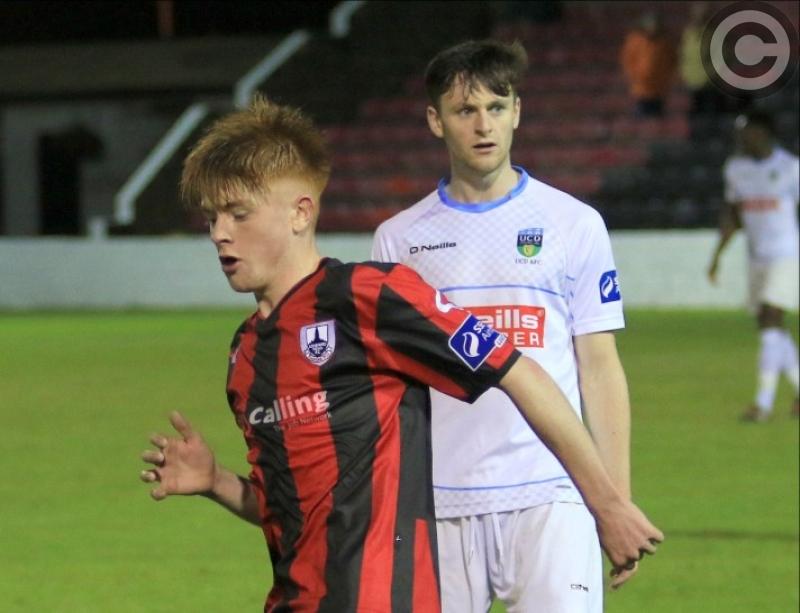 When promising local player Aodh Dervin was growing up his dream was to play for Longford Town in the League of Ireland and that ambition became a reality last season, the highlight being his first start for the senior side against UCD at City Calling Stadium in September.

“I was not expecting to get a chance. At the start of last season I did not get the opportunity but towards the end of the First Division campaign I was being looked at more in training. When Neale (Fenn) came in as manager it was very good,” said Aodh when he spoke to the Leader.

Under Fenn, Dervin got a few appearances for the first team and the youngster is full of praise for his boss. “He is brilliant. He knows how to deal with players and knows the game. His one to one management is very good as well. That is so important especially with young lads. More young fellas have come into the squad this year and he has been very good, always talking to them and making sure they know what they have to do.”

“Only for that I probably would have had to go somewhere else to play football. With those leagues in place it gave me a better opportunity to stake a claim for a place in the first team squad.”

2018 is going to be an important year for Dervin, not just in terms of his football as the St Mel’s College student is due to sit his Leaving Cert exams in June. He thanked Neale Fenn for his support while he juggles study and soccer.

“Neale is very understanding with the Leaving Cert. He knows I have to study and he lets me do that. Having the soccer keeps me motivated, especially when it comes to study. I can have a break from studying and play soccer.”

Looking forward to the season ahead, starting with the opening league clash against Cobh Ramblers at City Calling Stadium on Saturday night, Dervin is confident that Longford Town will be challenging for promotion. “I think we will be there or thereabouts this year and Neale has put together a very good squad this year.

“There are lots of replacements there if we pick up injuries and everyone is challenging  for a starting place which is great. We have a few new lads, along with a number of well established players, and there is a good mix of youth and experience in the side.”

For a lad of only 18 years of age Aodh is level headed and knows what he has to do if he is to nail down a regular place in the team. “I want to break into the first team and to keep my place. I know it is going to take a while but I will keep working hard to achieve that.”

So what advice has Dervin for young players starting off playing soccer? “Work hard and if you believe in yourself you will get there. And you don’t have to leave Longford.”