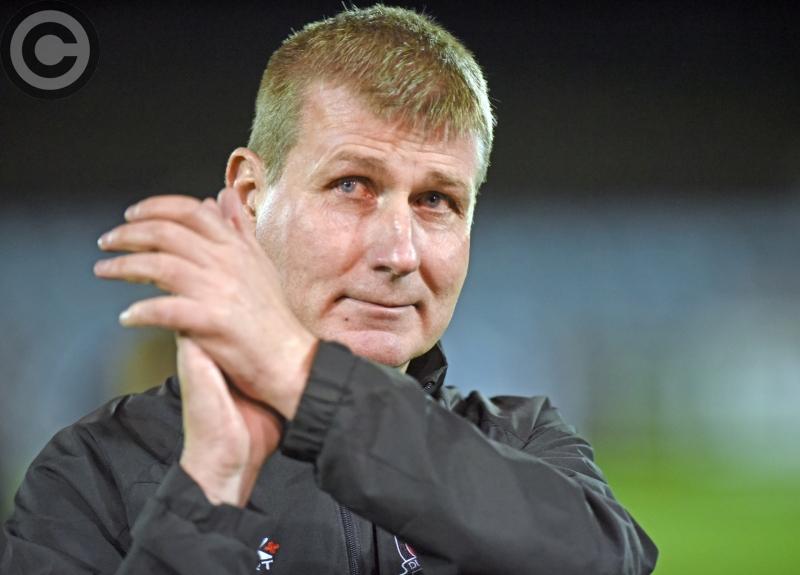 Stephen Kenny will manage in his fourteenth domestic Cup final this weekend and his seventh FAI Cup decider.

He has won the country’s most prestigious prize twice with last season’s final defeat to Cork being the fourth time he has suffered under the trophy’s gaze.

Ironically, Dundalk defeated him in the second of his six to date, at Tolka Park in 2002. He had lost to Bohemians with Longford a year earlier and courtesy of Garry Haylock’s exertions in April 2002, his wait to claim a maiden FAI Cup crown would extend to 2006 when in charge of Derry City.

“I was in the dugout for Bohemians when Dundalk beat us in 2002,” Kenny said wryly. “Over the five-years I’ve been here, I’m reminded of it at least once a week.

“Ciarán Bond, when he was chairman here, he used to bring it up at least once a week and John Whyte, the electrician here and a great underage coach, every time I see him walking into the ground, it reminds me of it because he played right-back that day,” he said in a fit of laughter.

His Cup record stands for itself. While victory has eluded him on four occasions, some of his greatest achievements have come in Cup competition since being appointed Longford Town manager in 1998, where his giant-killing exploits effectively build the club. His current assistant manager, Vinny Perth, played a huge role in Kenny’s early success.

“Longford were a club who had 50 or 60 people going to matches, but we got Cork and St. Pat’s in two replays that year (2001) and all of a sudden there were 5000 and 6000 around the railings at the matches and we went into Europe the following year and the stadium was build,” he said.

“There was such a level of passion. In the 92nd minute, we were one down against Cork and Vinny (Perth) scored an equaliser. He didn’t score many, I don’t know what he was doing in the box. Vinny was a holding midfield player, but he nicked the equaliser and we went down to Turner’s Cross and beat Cork in the replay.

“That really taught me the fickleness of football because Derek Mountfield, who was the Cork manager and a former England centre-half, was sacked the following day.

“There was a Longford artist who presented me with a painting that’s still in my mothers’ of that scene in Turner’s Cross at the final whistle. The crowd in the packed stand, the referee is just about to blow the whistle, people are up and I’m there as Longford manager in a tracksuit. Derek Mountfield is behind me looking at his watch. Time had ran out for him and effectively it did.”

Winning with Derry in the dramatic 2006 final against St. Patrick’s Athletic is amongst Kenny’s career highlights – it was voted the greatest ever FAI Cup final in more recent times. A feat Kenny seems proud of.

His next Cup final was only five-months later. As manager of Dunfermline, he took them to within a whisker of a remarkable success and even when pitted against the mighty Glasgow Celtic in the final, Kenny wouldn’t betray his basic principles. It’s about winning in style, not just about the winning. His management style drew the attention of Gordon Strachan, who was highly complimentary.

“It was a very busy time in my career because within five-months I’d managed in the FAI Cup final at Lansdowne Road and the Scottish Cup final in Hampden,” he smiled. “It was an amazing time.”

“I parachuted in two players who hadn’t played in over three months into the final as we’d a lot of players ineligible and we’d a player on loan from Celtic, Jim O’Brien, who they wouldn’t allow play.

“We’d beaten Rangers, Hearts and Hibs to get to the final and Dunfermline had never done that before, or since. But Celtic were the league champions with (Shunsuke) Nakamura, Artur Boruc, Aiden McGeady at his best, Neil Lennon, (Jan) Vennegoor of Hesselink and Kenny Miller was flying scoring goals for Scotland.

“It was an 86th winner. He - Jean-Joël Perrier-Doumbé - was on loan, it was a scratchy effort that went in.

“When I walked down the tunnel with Gordon Strachan that day, he was on crutches. He’d had a hip operation and was struggling, but I found he was a terrific person. He hobbled right across the stadium to me after the whistle and said ‘you caught us by surprise. We practiced all week against 10 men behind the ball and one up’, but we went with two strikers in that final and had a right go.

“We’d a couple of early chances on Celtic and caught them a bit (by surprise) because we pressed them high and got after them, even though no one did that to Celtic at that time.”

By this point in the interview, there was an energy in Stephen’s tone. He seemed giddy, anxious to move onto 2015 and the next major chapter of his love affair with the National Cup.

“Richie Towell’s late goal and the celebrations on the pitch after, you know, to go a whole season where you only lose one game and win the double is amazing, we’d an amazing team,” he grinned.

His rivalry with Cork City was the next topic of reference. It’s perhaps understated considering he’s preparing to face them in a Cup final for the fourth time (FAI and League Cup), added to the two ‘league deciders’ of 2005 and ‘14.

“The Cork team in 2005 wasn’t a bad team, they’d Kevin Doyle and John O’Flynn, Roy O’Donovan – a flying winger, Joe Gamble and George O’Callaghan. It was a good side and the best team overall that year even though, against the odds, we hung in there.

“That Derry team had been in a relegation battle the previous season and we had brought in a lot of young players. The following year when we played all them games in Europe, we had five U21 players - Kevin Deery, Ruaidhri Higgins, Barry Molloy, a young Killian Brennan and a young Paddy McCourt. They were all only 20 or 21 at that stage.”

A short pause ensued before Kenny cracked another smile and joke, “I sound about 114 here,” he said.

Though humble in every manner, Dundalk’s supremo seemed to be taken aback when his Cup successes were put to him. He wasn’t altogether shy or eager to play them down, but one got the sense that he was processing the facts. He became more urgent, as if ready to take Cork on. If his reaction is anything to go by, The Rebels could be in some bother on Sunday afternoon. His magic wand may be set for its annual reappearance.