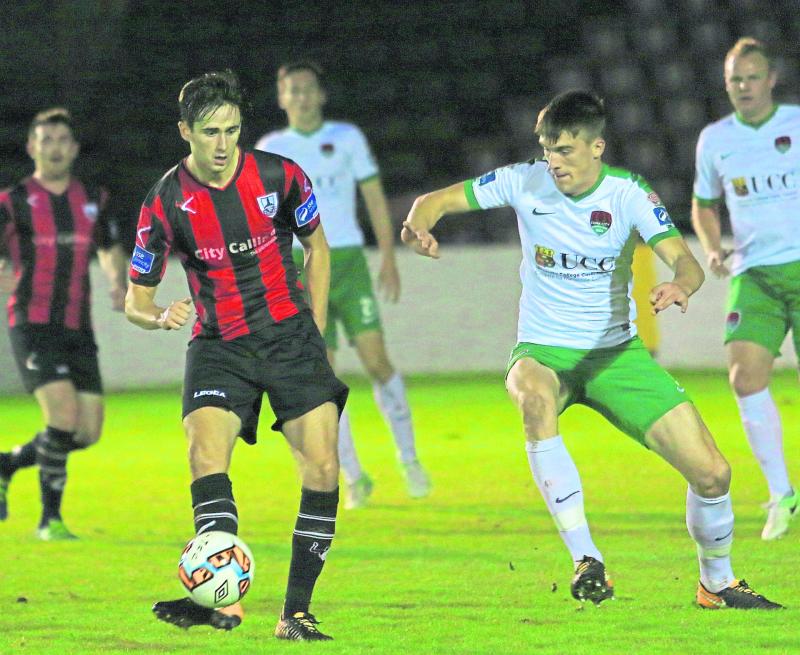 There was no FAI Cup upset for Longford Town with the gulf in class as Cork City strolled to a comprehensive victory in the quarter-final clash watched by the official attendance of 910 at City Calling Stadium on Saturday night last.

The damage was done in the first half as the runaway Premier Division league leaders Cork took a 3-0 lead into the break and added a fourth six minutes into the second half. Credit to Longford Town for battling it out to the bitter end and they pulled a goal back in the 64th minute courtesy of a Robbie Williams own goal in the process of creating other chances.

Speaking after the game Town manager and former Cork City player Neale Fenn said that the concession of three first half goals put the issue beyond all doubt. “We knew we needed to be on top of our game and play well and hoping that they didn’t play well. That didn’t happen. They played quite well and we were not good enough in the first half and conceded three sloppy goals that killed the game really.”

Cork City’s superiority was evident from early on with the visitors dictating play and producing some lovely passages of play. Gearoid Morrissey had the first chance of the game in the 17th minute but his low shot went wide. Minutes later the Town defence stood off Stephen Dooley but his effort went wide.

In the 24th minute the deadlock was broken when Jimmy Keohane’s effort was saved by Jack Brady and Kieran Sadlier scored from the resulting corner kick. Four minutes later they doubled their advantage when Shane Griffin set up Keohane for the second goal.
Fenn was disappointed with the goals his side conceded, “You are trying to hold out for as long as you can and try and defend which I thought we did well for the first 20 minutes. We restricted them to not many clear chances but then they score from a corner which is so disappointing and a penalty just before the break. Then straight after half-time they score a fourth goal.”

It was all Cork and the Town could not muster up anything to trouble City netminder Mark McNulty. Keohane forced Brady into making a fine save in the 32nd minute and then just before the break the visitors were awarded a penalty.

Brady was adjudged to have taken down Karl Sheppard and the assistant referee flagged for a penalty with Sheppard duly converting the spot-kick.

Trailing by three goals at half-time, Longford manager Fenn told his players to go out and have a go in the second half and and try to get the next goal. Unfortunately for him and for the Town it was Cork who scored again when Conor McCarthy’s ball over the top was finished to the net by Sheppard.

Fenn said: “The talk at half-time was to go and get the next goal which was going to be crucial. They scored it and it killed the game. We had a good go in the second half. Got a goal back and had a few other chances so credit to the lads for that.”

Despite the game being all over as a contest, the Town battled well and put it up to Cork in the second half. The home side pulled a goal back in the 64th minute when Peter Hopkins through ball was turned into his own net by City defender Robbie Williams.

Minutes later Williams was on hand to deny David O’Sullivan and deflected his effort out for a corner. O’Sullivan had another chance but his shot was blocked while near the end Kaleem Simon was unlucky not to get a second consolation goal for the Town.

For Fenn and his players it is now back to league matters and trying to end the season strongly. “We just want to carry on now and have a strong finish to the league and start planning for next year,” concluded the dejected Longford Town manager.