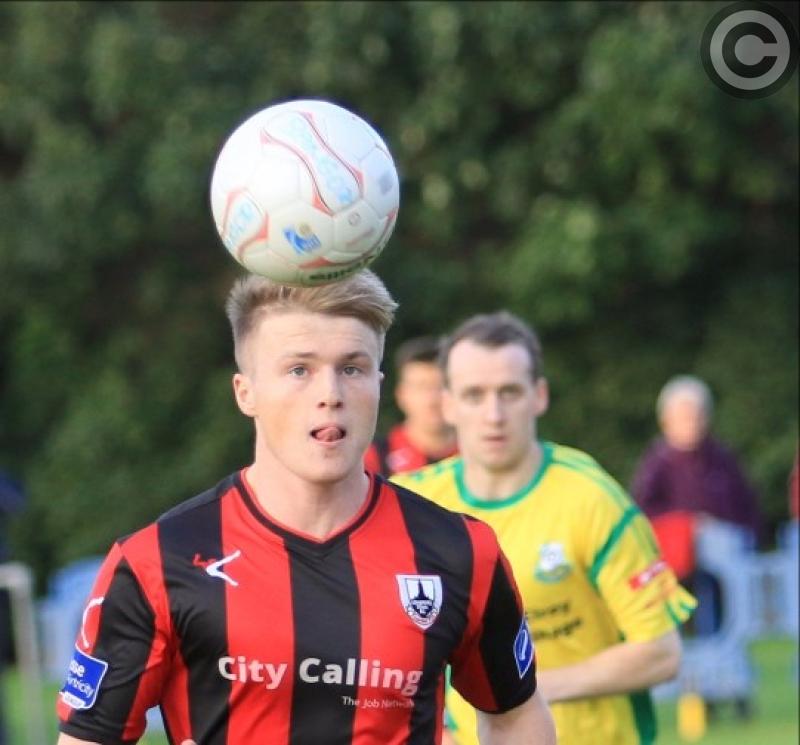 Daniel O'Reilly on the ball for Longford Town against Bangor Celtic. Action from the FAI Cup second round game at the Iveagh grounds in Dublin on Friday night last. Photo: Syl Healy

A stunning strike from substitute Don Cowan in the 71st minute sent Longford Town through to the FAI Cup quarter-finals but they were made work hard for their expected win over non-league side Bangor Celtic at the Iveagh grounds in Dublin on Friday night last.

After failing to put away the chances they created in the first half, the Town needed to change things around and brought on Cowan in the 66th minute. Five minutes later he burst through and fired past former Longford keeper Stephen Conlon for the matchwinner.

Bangor Celtic were very unlucky not to get an equaliser with Town keeper Jack Brady pulling off a fantastic save with his foot to deny Graham Zambra in the 81st minute.

In the aftermath of the win Longford Town manager Neale Fenn summed up the game perfectly. “I think we edged it in the first half; we had the better chances. We knew they were going to come out and put us under pressure with the long balls and stuff like that. We did alright and struggled at times to deal with that but we brought Don on to freshen things up, he scores a great goal and then we were kind of hanging on near the end.”

Longford started brightly and almost broke the deadlock in the 9th minute when a corner from Jake Kelly met the head of Daniel O’Reilly but his effort came back off the crossbar.

Another Kelly delivery in the 17th minute nearly yielded a goal but David O’Sullivan’s header was just wide of the target.

In the 24th minute Sam Verdon headed over the bar and then in the 40th minute the Town were most unfortunate not to open the scoring when O’Sullivan’s header came off the post and while Verdon followed up to finish the ball to the net he was deemed to be offside.

Fenn knew Bangor Celtic would be a difficult proposition.  “We didn’t come here thinking it was going to be a nice, pretty game of football. We knew exactly what was going to happen. It was how we dealt with it. They created some good chances and particularly the great save from Jack.”

With the game dragging on and the Town still not able to find a way past the opposing keeper Conlon, on came Cowan in the hope that his pace could cause problems and he did just that in the 71st minute to put Longford ahead.

Instead of the Town pushing for a second goal, Bangor Celtic went in search of an equaliser and really put the pressure on and Fenn was delighted his side were able to deal with that.

“When you play teams from lower leagues the longer they are in the game the more they believe but we dealt with it so we are happy.”

Bangor Celtic substitute Luke Synott was unlucky to see his header just go over the bar in the 76th minute and in the 81st minute Town keeper Jack Brady brought off an excellent save with his foot to deny Graham Zambra and keep his net intact.

The home side continued to press and put the pressure on the Town defence and Tristan Noack-Hofmann and Brady combined to deny Bangor Celtic again minutes from the end.

Despite the Leinster Senior League outfit having all the possession in the closing stages they were unable to get an equaliser and force the game into extra-time.

Longford Town held out for a place in the last eight of the FAI Cup against Premier Division league champions elect Cork at City Calling Stadium on Saturday September 9, kick-off 7.30pm.

It may have been a struggle against Bangor Celtic but the main thing for Neale Fenn was the victory.

“The most important thing is that we are into the quarter-finals and we also kept a clean sheet which we have not managed to achieve in a while. That’s a great thing for us. Three wins in a row so we are delighted.”