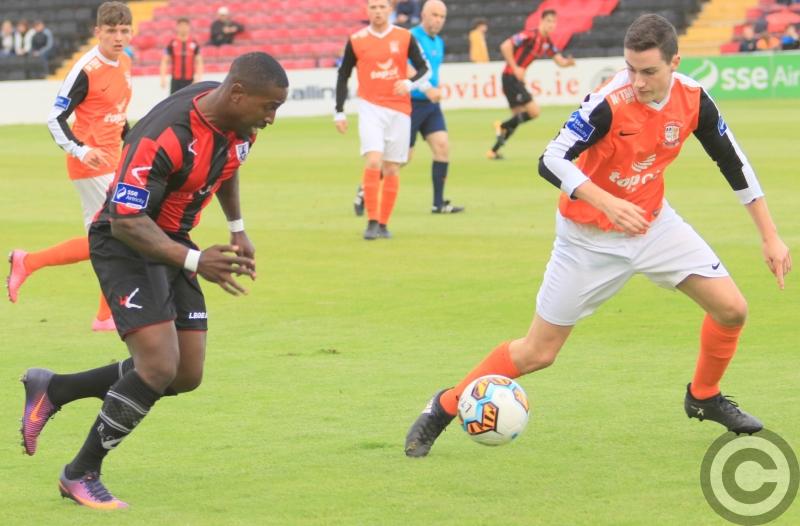 Longford Town get away from the rigours of League football this Friday night when they travel to the Iveagh grounds to play Leinster Senior League side Bangor Celtic (Crumlin, Dublin) in the second round of the FAI Cup, kick-off 7.45pm.

Bangor Celtic play in the Leinster Senior League and are one of the top teams in the Division. They have come through to this stage of the competition having won two games to date against top sides.

Bangor Celtic played Cherry Orchard and most people know of their pedigree in the Leinster Senior League and their standing in under age football. Their meeting ended 2-2 at full-time but they pulled out all the stops to eventually win 3-2.

In the last round of the competition, Bangor Celtic  played Munster Senior League champions Everton FC and they came from 2-0 down to win a very exciting game 3-2 with all their goals coming in the final 15 minutes of the game. Their goals came from Caleb Murray, Lar Dunne and Michael Fox. There is a belief that Leinster Senior League clubs may not be at full fitness due to the fact that their season is only commencing but that is a myth as we all know from experience that some Leinster Senior Clubs are on a par with most of the teams in the First Division.

If you talk to anyone involved with Wexford they will confirm the fact that some of the clubs are better than some in the First Division after they exited the competition in the last round.

It was almost impossible to get any news on the Bangor squad but by all accounts they have a former Town player in their squad. Paddy Collins,  who played with the Town back in 2011, plays with them and he is a better than average centre half. Last weekend Bangor played Sacred Heart/ Killindardan in the Major Saturday Division and lost the tie 3-2 away.

Longford Town manager Neale Fenn has changed the playing system within the club and supporters can now look forward to seeing our players taking down the ball and playing good attractive football. Last Saturday night will be a night to remember for all Town fans especially the young fans who were at the summer school during the week and were guests at the game. Imagine the youngsters who were attending their first ever game at the City Calling Stadium and to see eight goals scored. Some of the late comers to the game missed part of Davy O'Sullivan's hat-trick.

He has missed much of this season through injury but he was on fire on Saturday night and he was very unlucky not to score a few more goals in a game that was controlled by the Town for the full 90 minutes.

When the team was announced there were a few strange omissions but most were due to injury. Paul Skinner who lost his place to the very impressive Jack Brady is out injured at the moment and his place on the bench was taken by current under 19s keeper Aaron Kenny.

Team captain Kevin O'Connor is still out due to injury and his place as captain is taken by his midfield partner Dean Zambra who is playing his best football since joining the club.

Peter Hopkins,  who had a super game against Sligo Rovers in the Cup, was rested for the Athlone game as he hadn't much pre season training but we can expect him to be in the starting team for the Bangor Celtic game if fully fit.

Aidan Friel, who was substituted in the Sligo game,  wasn't in the panel on Saturday night while Gavin Boyne also missed out. Kaleem Simon,  who rejoined the club recently after being with Bohemians earlier in the season, was also a surprise omission from the squad but he is possibly injured.

This was a real workmanlike performance by the Town to win 7-1 against an Athlone team that looked as if they have many problems. We know that our supporters were overjoyed to beat our near neighbours to gain the bragging rights but this was a very understrength Athlone team.

We can expect manager Fenn to put out his best team for the cup game against Bangor Celtic and we cannot take anything for granted against the Leinster Senior League side.