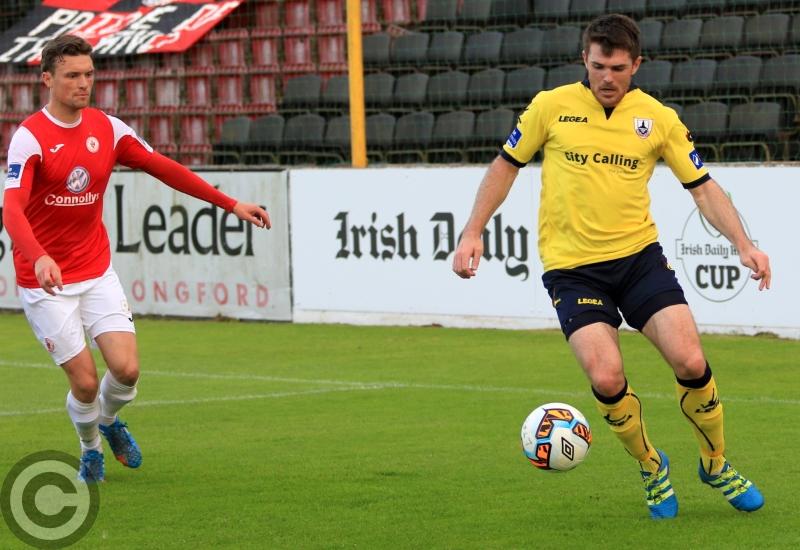 “Football is back” was the slogan last week to announce the start of the new Premiership season in England.  It could also describe the FAI Cup game at City Calling Stadium on Saturday night last as Longford Town produced a fantastic performance to knock Premier Division side Sligo Rovers out of the competition after extra-time.

The Town were full value for their wonderful win with manager Neale Fenn ecstatic after the game: “It was a brilliant performance from us. It went to extra-time and them being a full-time outfit and us being part-time suggested that we might struggle but we didn’t. We kicked on and got the win. Fully deserved.”

Karl Chambers had given Town the lead in the 26th minute but Sligo levelled five minutes later with a goal that looked to be offside. The visitors went in front just before the break but Longford battled hard and got their equaliser (2-2) in the 83rd minute through Sam Verdon to force the game into extra-time.

The Town bossed the extra-time period and it was hard to believe that they were the part-timers up against a full-time outfit. They got their just reward when Peter Hopkins put them ahead in the 105th minute and substitute Kealan Dillon sealed the famous win in the 117th minute.

Hopkins and Verdon were recent new signings by Fenn and he was delighted with their performances.

“Peter Hopkins was exceptional and scored a fantastic goal. Sam Verdon as well got a great goal. They are  good lads, young lads who want to play the right way which we are trying to do here. They produced it on this occasion. As long as they keep producing performances like that I will be happy.”

Both sides had chances in a tight opening and it was the Town who broke the deadlock in the 26th minute when Dean Zambra’s pass was finished to the net by Karl Chambers.

The lead only lasted five minutes when a cross from John Russell was headed home by Daniel Kearns for the Sligo equaliser. Town keeper Jack Brady and his Town defence stood still expecting to see a flag for offside but none was shown.

Benny Igiehon headed over the bar in the 40th minute and two minutes later he made no mistake to put Rovers ahead.

Rhys McCabe brought a fine save out of Jack Brady in the 52nd minute and down the other end Jake Kelly forced Sligo keeper Micheal Schlingermann into saving his effort in the 61st minute.

The Town were growing in confidence and began to apply pressure but created nothing to really trouble Schlingermann. David O’Sullivan had a low shot that just went wide but in the 83rd minute they levelled matters when Sam Verdon’s header beat the Sligo keeper.

Fenn was delighted to see the equaliser going in after changing his side’s shape in the second half: “We had to gamble. It’s the cup and we were 2-1 down, we had to throw caution to the wind. We threw an extra man up front and went for it and got the equaliser. The boys pulled it out of the bag.”

Don Cowan then blasted his effort over the bar while Sligo’s McDonagh forced an excellent save out of Brady in the 87th minute and in the 90th minute he shot over as the game went to extra-time.

The Town took the lead in the 105th minute with a wonderful goal from Hopkins; his first for the club.

Sligo were shattered and in the 114th minute McDonagh was sent off. One minute later Hopkins had a shot cleared off the line and then in the 117th minute Dillon scored the fourth goal and the place erupted.

The season is still alive for Longford Town who have been drawn away to non-league side Bangor Celtic (Crumlin, Dublin) in Round 2 with the game to take place at the Iveagh Grounds on Friday August 25, kick-off 7.45pm.  Bangor Celtic play in the Leinster Senior League.