Longford Town at home to Shelbourne on Saturday 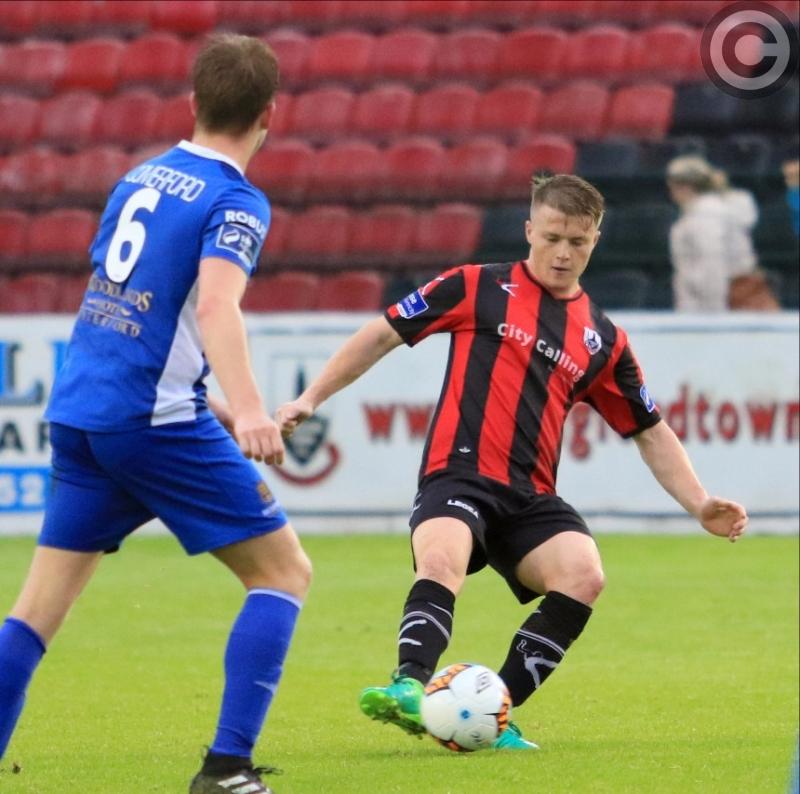 Longford Town FC start their fourth phase of fixtures in the First Division this Saturday night when they entertain Shelbourne at City Calling Stadium, kick-off 7.30pm.

Last weekend the Town travelled to Ferrycarrig Park and came home with 3 points from a 2-1 victory while Shelbourne dropped three points due to a 1-0 defeat by Cabinteely who scored the all important winner near the end of the game.

Elsewhere promotion favourites Waterford gave second in the table Cobh Ramblers a footballing lesson in a 4-0 victory in the RSC. That victory  leaves them nine points ahead of both UCD and Cobh Ramblers with only seven games left.

Recently they have along with near neighbours Bohemians maybe reluctantly agreed to a ground sharing agreement that will take place at a new Dalymount Park in the coming years. Most clubs might not agree with such an arrangement but that seems to be a viable option in many countries going forward.

Some years ago when Shelbourne were the top club in the country they had one of the best grounds in Ireland but Tolka Park as it stands at the moment is a pale shadow of what it was like say 20 years ago. When Ollie Byrne was at the helm of this famous club nothing was impossible as they were the club to look up to.

Now Tolka Park is in disrepair but the club are still striving for success in a much smaller way. Former player Owen Heary  has taken over the managerial hot seat and is doing reasonably well with very limited resources.

The current Shels team have a mixture of youth and experience with keeper Dean Delaney being one of the top net minders in the League (Premier or First Division). Delaney is one the players who has links back to the glory days in Europe and he is capable of giving stunning performances for his club.

Shelbourne football club have won the Premier Division here on thirteen occasions and were FAI Cup champions and Heary and Delaney are two people who have been in those successful teams in the past.

Sean and Alan Byrne are two experienced defenders and former Bohemians player Derek Prendergast make the defence a hard one to breach.

Mark Hughes, who played for us and Athlone Town,  is one of their best players in midfield where he is partnered by Niall Lanigan and David O'Leary and another former Town favourite Lorcan Shannon, who had a few successful seasons with the Town in recent years.

Up front Shels have various combinations recently with the latest against Cabinteely last week was James English and Adam Evans. They also have the experienced Aidan Collins and former Town midfielder James O'Brien in their panel.

On their last league appearance against Cabinteely, Shels suffered a shock 1-0 defeat with the goal coming in the dying minutes of the game and that result moved the Town back into fourth place on goal difference over Pat Devlin's improving Cabinteely.

There has been a lack of goals in the three games to date between the clubs as two were 0-0 draws and the Town won the other fixture 2-0.

The opening game of the season at Tolka Park ended scoreless and there was really not a lot between the clubs in this game. The Town should have won and had their chances with Davy O'Sullivan missing a chance to give the Town all three points from the penalty spot.

Four  players who featured  in that opening game of the season are no longer with the club - Stephen Walsh,, Enda Curran, Mark Langtry and Dylan McGlade.

The Town should have won that game but that was mainly the story of the team for most of the season. The second meeting between the clubs in mid April at City Calling Stadium ended with a great 2-0 result in favour of the Town. On that occasion goals in either half secured a well deserved victory.

It's interesting to note that the goals were scored by two former Shels players. The opening goal in the first half came from the now departed Dylan McGlade who emigrated recently while the second goal came in the second half from Gavin Boyne who was on the bench last Friday in Ferrycarrig Park.

The third meeting between the clubs was at Tolka Park and in that game Gary Cronin took charge in a caretaker capacity after Alan Matthews departed the club along with his assistant Kevin Doherty. The departure raised many eyebrows especially after the Town trashed bottom club Wexford on a 5-0 scoreline with the team playing some very good football.

This definitely was a game that the Town should have won, especially after the home side were reduced to nine men. Former Town player James O'Brien saw red at the end of the first half while they also lost another midfielder David O'Leary before the hour mark.

The Town missed many scoring chances but Shels keeper Dean Delaney and defender Derek Prendergast were magnificent in this game.

Last Friday the Town travelled to Ferrycarrig Park to take on basement club Wexford who have been in good form recently. The home side who the previous week defeated Shelbourne on a 1-0 scoreline and the previous weekend they were so unlucky to lose 2-1 to champions elect Waterford.

The Town went into this game after losing their first game in seven the previous weekend. The Town manager Neale Fenn had both of his new signings in their squad for the first time with former St Pat’s player Sam Verdon starting up front alongside Don Cowan who is enjoying a new lease of life under new manager Fenn.

That was the only change from the team that played in the home defeat to Waterford the previous weekend. Verdon came in up front for Gavin Boyne and he had a very impressive debut. In the 36th minute the former Pat’s man wrote himself into the record books with a goal on his debut.

His strike partner Don Cowan, who is really starting to impress in recent games, ran past two defenders on the end line and his pinpoint cross was headed to the net by Verdon past Wexford keeper Corey Chambers.

There was another first goal for a Town player  in the 57th minute when they extended their lead. Jake Kelly's corner from the right was punched out by home keeper Chambers and it fell to Town youngster Tristan Noack Hoffman who volleyed past Chambers for his first senior goal for the club.

Neale Fenn made two substitutions, bringing on Cody Mulhall and Kealan Dillon for Karl Chambers and Verdon. With the Town in complete control the referee Andrew Mullally, not for the first time in Town games,  was the central figure of the game when he unbelievably sent off Town midfielder Kealan Dillon.

In the 69th minute the home side got back in the game when slackness in the Town defence allowed midfielder Thomas Croke to score. The midfielder, who scores quite a few goal for his team, ran at a very hesitant Town defence and shot from 25 yards to beat Paul Skinner at his near post.

This was a goal that should not have been conceded and once again there is calls for Jack Brady to get a run in goals after recent performances.

There is no doubt that new manager Neale Fenn has put his mark on the performances of the team as there is no kick and run football from the team.

New  signing Verdon had a very impressive debut and he looks like a very good signing but by all accounts manager Fenn isn't finished in the transfer market.

With the July window still open we can expect a few more signings as the team prepares for the final series of games in the league and the forthcoming FAI Cup game against near neighbours Sligo Rovers.