Longford Town back on track with away win over Wexford 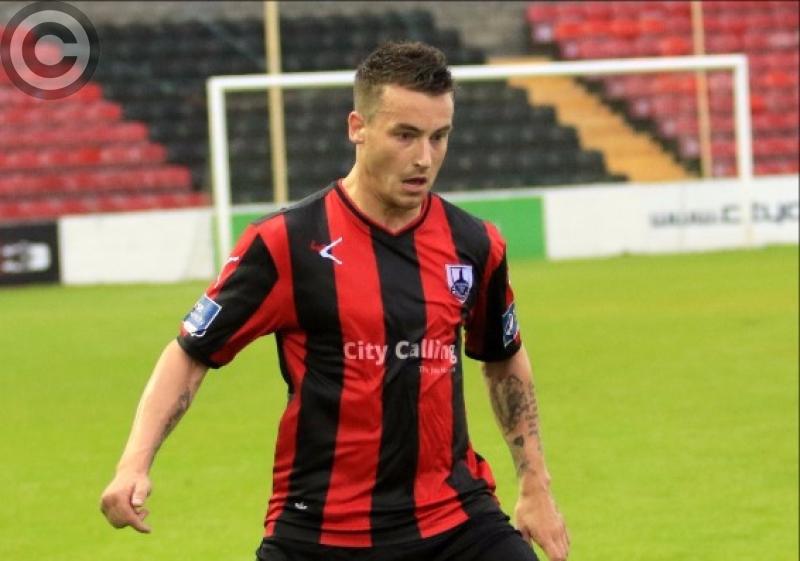 Longford Town defender Aidan Friel, who was in action against his old club Wexford on Friday night last.

Longford Town bounced back from their defeat at home to league leaders Waterford the previous week in getting the better of bottom club Wexford at Ferrycarrig Park on Friday night last.

New signing Sam Verdon was on the scoresheet with Tristan Noack-Hofmann grabbing the second goal before Thomas Croke pulled a goal back for Wexford in the 69th minute.

The Town had to play the final 14 minutes of the game with 10 men after substitute Kealan Dillon was sent off, nine minutes after he was brought on, but they held out for a hard earned win.

In a tight first half  it was the home side that had the opening chance on goal; a cross from Mark Slater found Dean Kelly but his shot was narrowly wide in the 8th minute. Minutes later Longford had their first attempt on goal; debutant Verdon getting on to Aidan Friel’s cross but his effort was deflected over the bar for a corner.

Town keeper Paul Skinner saved from Kelly in the 20th minute and then denied Aaron Dobbs in the 25th minute. Dobbs had another chance in the 30th minute but he shot over the bar.

After Wexford enjoyed a spell of creating chances, the Town began to gain possession and in the 36th minute they broke the deadlock when Verdon got on the end of Don Cowan’s cross to head home on his debut for the Town after signing from St Pat’s.

Five minutes into the second half the Town doubled their advantage; Jake Kelly’s corner found Tristan Noack-Hofmann and he slammed the ball into the back of the net.

Neale Fenn’s side were boosted  by that two goal advantage and went in search of another one. In the 57th minute Daniel O’Reilly had a chance after his free-kick came back off the wall and while the rebound fell to him his second attempt was also blocked down.

Jake Kelly was next to have a chance for Longford but he shot over the bar after receiving the ball from Karl Chambers.  Wexford pulled a goal back in the 69th minute when Thomas Croke found the back of the net with a long range strike.

The Town went in search of a third goal but all they could do was force a number of corners which came to nothing.

Then in the 76th minute the visitors were reduced to 10 men when Kealan Dillon was sent off after reacting angrily to a tackle by Wexford substitute Adam O’Rourke.

With numerical advantage, Wexford tried to engineer an equalising goal but they didn’t create much to trouble Town netminder Skinner. Mark Slater had a chance in the 86th minute but it was a poor effort  and not on target.

Both sides created chances that led to corners with Slater’s effort curling into the box but the Town defence were able to clear the danger as the midlanders consolidated their grip on the game in moving up to fourth in the First Division table.