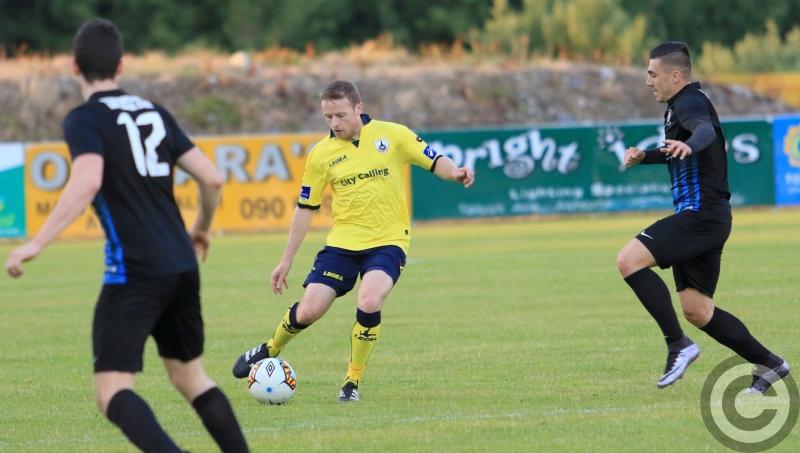 Longford Town, who extended their unbeaten run in the league to four games on Friday evening last with the 2-2 draw against Athlone, entertain Cabinteely at City Calling Stadium this Saturday, kick-off 7.30pm.

New manager Neale Fenn will be planning for a winning start as the Town bid to build on recent positive results that have yielded 8 points out of a possible 12 in moving up the First Division table.

Caretaker boss Gary Cronin started the same team in Athlone that featured against Cobh Ramblers the previous weekend but the bench was strengthened with the return of some of the long term injured players.

Cronin introduced Don Cowan, Enda Curran and Cody Mulhall in the second half and as the Town piled on the pressure they got the equaliser when Curran found the back of the net in the 88th minute.

There is no doubt that if the Town had taken their many chances and didn't give away stupid goals we would have picked up three away points.

The fact that most of the injuries have cleared up at the moment the Town now have a chance to pick from an almost full strength squad. The news filtered out at the weekend that left winger Dylan McGlade has departed the club as he seems to be going to America and he will be sorely missed. All at Longford Town wish Dylan the best of luck in the future.

With Dylan departing the scene maybe this is the time to give young Dan Beya a run on the wing as no doubt that he has the skill to trouble opposing defenders. New boss Fenn will be hoping that Davy O'Sullivan and Mark Langtry will be back in action soon.

Cabinteely have a vastly experienced management team of Eddie Gormley and Pat Devlin. When the duo took over the Dublin club they decided to bolster their squad with experience and their first signing was Kieran Marty Waters who has an abundance of talent and experience and the player who was on the books of Shamrock Rovers a few seasons ago is the main reason that they are doing so well.

Add to Kieran they also have veteran striker Jason Byrne who still has a lot to offer his new club. Town supporters will know a few of their squad as Daire Doyle, who played in the Premier Division here with the Town, and Victor Ekanem, who is a very good central defender, were previously with the Town.

Keeper Michael Kelly is a big lad and he commands his box very well while centre half Conor Keely is a no nonsense defender who can play ball in any opposition. Big midfielder Christian Lotefa looked a fine prospect but he will miss the match on Saturday as he was sent-off in their game last weekend at home to surprise winners Wexford.

Cabinteely have other talented players in their squad, Jack Watson, Evan Galvin and Joe Doyle to name a few, and these lads seem to be blossoming under the Gormley/ Devlin management team. There should be goals in Saturday night's game as the Town bid to stretch their unbeaten run in the First Division to five games.