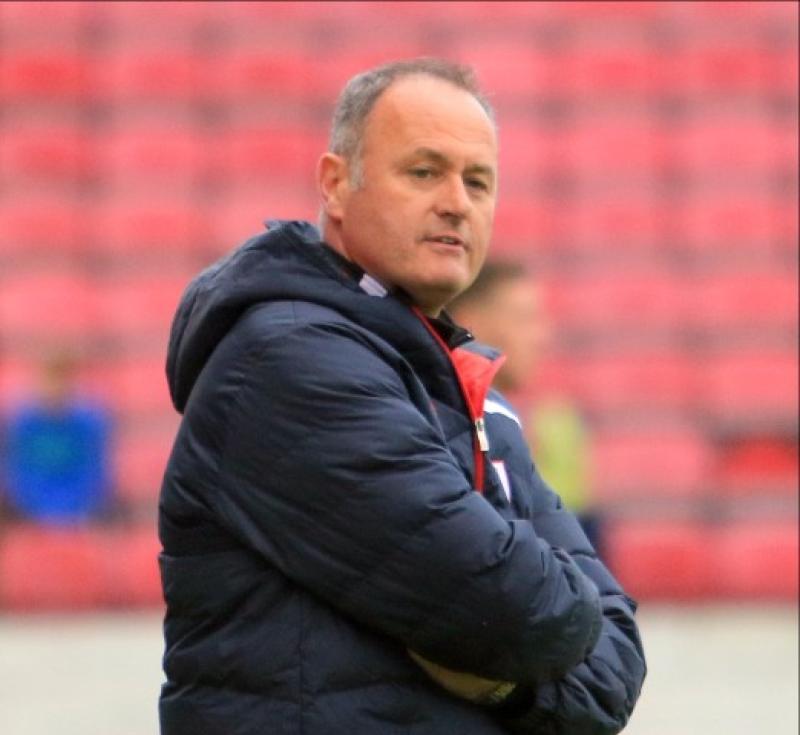 Alan Mathews pictured during the course of his last game in charge of Longford Town against Wexford FC at City Calling Stadium on Saturday evening last. Photo: Syl Healy

It was rather ironic that Longford Town succeeded in producing their best performance of the season, scoring five goals against Wexford FC, and ended up managerless in the aftermath of the Airtricity League First Division clash at City Calling Stadium on Saturday evening last.

It appears that the decision to part company with Alan Mathews was obviously on the agenda, regardless of the result against the team firmly rooted at the bottom of the table, and the club issued the following short statement soon after the match which was watched by the very small official attendance of 211.

“Longford Town wish to announce that by mutual consent, the club and First Team Manager Alan Mathews have parted ways. We thank Alan for his efforts and wish him all the best in his future endeavours. Gary Cronin will take charge of the first team for next game v Shelbourne.”

So the big win over Wexford turned out to be the last game in charge for manager Alan Mathews in his second spell with the club, after taking over from Tony Cousins last August, and while the timing of Alan’s departure was dramatic the results this season were clearly not good enough and he was obviously in a precarious position.

Longford Town are currently 13 points behind the leaders Waterford FC in what has been a fierce struggle this season when a strong challenge for the sole promotion spot was expected.

Alan Mathews is now gone but let us not forget that In his first spell as manager of Longford Town FC, he guided the ‘red and black’ to FAI Cup triumphs in 2003 and 2004 along with the League Cup title in 2004 and deserves a lot of credit for the most successful and memorable  period in the history of the club.

So the search begins for a new manager as Longford Town got back on track with a comprehensive victory over Wexford that certainly pleased the loyal home supporters in that a lot of constructive football was played.

While injuries ruled out attackers David O’Sullivan, Don Cowan, Enda Curran and Cody Mulhall, there was some good news on the casualty front with defender Noel Haverty back in action (brought on late in the game) following a long term absence dating back to the opening league game this season against Shelbourne at Tolka Park back at the end of February.

The first of the five goals was scored as early as the 3rd minute when lively left winger Dylan McGlade (always a threat throughout the game) blasted the ball to the back of the net, after connecting perfectly with a right wing cross from Kealan Dillon.

While both sides created chances throughout the first half it remained at 1-0 until the 40th minute. Jake Kelly played a defence splitting pass through to Gavin Boyne, whose shot was saved by opposing keeper Graham Doyle, but the ball broke kindly for Dean Zambra who made no mistake from a few yards out to leave Longford leading by 2-0 at the break.

From there on the Town were in cruise control with the influential midfield general Kevin O’Connor firing home the third goal in the 53rd minute and things went from bad to worse for youthful Wexford when Dean Zambra (who also made a big impact in the midfield sector) got in the clear to find the back of the net for the second time in the game with 68 minutes gone on the clock.

The demolition job was complete in the 72nd minute when Jake Kelly set up the industrious Kealan Dillon for a cracking fifth goal in the game that marked the departure of Alan Mathews as manager of Longford Town FC.

On a final note, it was good to see another local lad Aodh Dervin getting a run with the first team, making his league debut when he replaced captain Kevin O’Connor in the 81st minute.