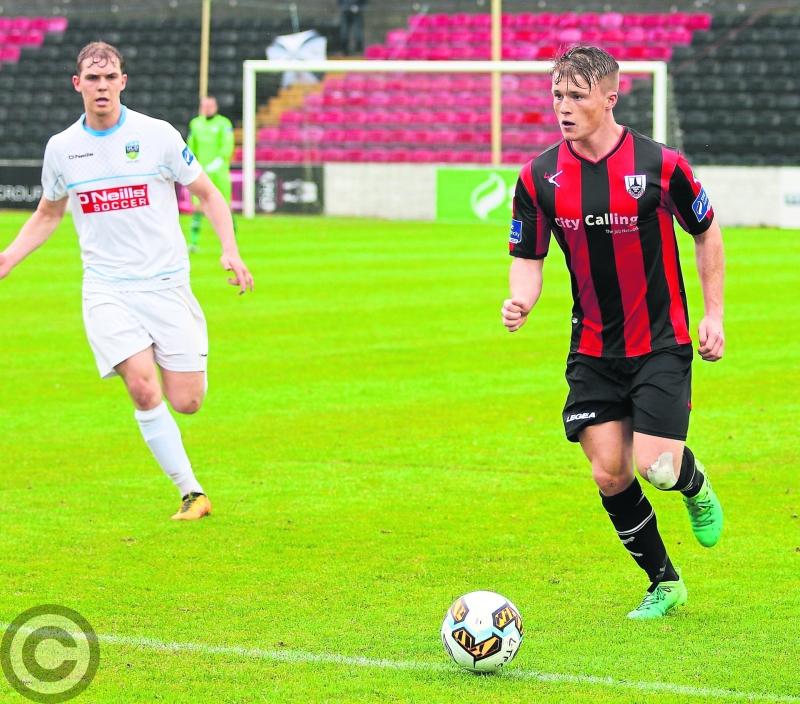 Longford Town welcome a new look Wexford FC to City Calling Stadium (kick-off 7.30pm) this Saturday evening for the last game in the second phase of fixtures, taking the League to the halfway stage.

The Town, like Wexford, were relegated from the Premier Division  last season and it's only goal difference that keeps the Town up from second last in the First Division ahead of Athlone.  It's really dismal reading that at this stage of the season that Wexford, Athlone and Longford occupy the bottom three positions in a poor First Division.

Last weekend the Town travelled to the RSC to play the team that everyone believes will win the league and be promoted to the top flight of League of Ireland football. The result of the game was a one nil victory for the Waterford side that has many top class players and who took the lead after only 12 minutes courtesy of a Declan Daly shot that whizzed past Paul Skinner in the Town goal.

It's hard to believe that Alan Mathews side came away from Waterford with no points gained as in fairness the Town did really deserve at least a draw but once again our performance in front of goal left a lot to be desired.

We all know that supporters are beginning to get very annoyed with our results recently but yet again like UCD the week before the Town had many chances to at least get a draw and in all fairness they should have won both games against the first and third teams in the First Division table.

Karl Chambers and Gavin Boyne, who started against UCD, were on the bench against Waterford with Kealan Dillon and Dylan McGlade both starting, while Jake Kelly replaced the injured Don Cowan.

The Town for the second week in succession went a goal down early on (12th minute) and this goal like the goal against UCD could have been avoided. There is a lack of cleverness in the defence and other teams seem to punish the Town for different reasons.

After the goal the Town definitely had their moments and with a bit of luck could have at least shared the points but when your luck is out things usually go against you. Both Jake Kelly and Dylan McGlade had glorious chances to score for the Town but luck seems to be against the team at this stage.

The Town are a whopping fifteen points behind the leaders Waterford but if we had converted all our chances against the top teams in the last few games the difference in points would be a lot better. Looking at the stats it is really hard to believe that we have the second worst scoring record in the league,  second only to bottom club Wexford who are bottom of the scoring charts with six to date while the Town have only ten goals.

Our goals against is 13 and that is the same as second in the table Cobh Ramblers while leaders Waterford have the best defensive record of six conceded and UCD who are third have only conceded nine to date.

The Town are in the middle of a major injury crisis at the moment with no less than six players who would start are all on the injured list. Noel Haverty is out since the start of the season but he may be close to making a comeback to the starting eleven. There is no doubt that he would make a huge difference in defence and we would not be leaking easy goals.

Mark Langtry has been converted into a defensive player due to all the injuries and he was doing extremely well in his unaccustomed role as a defender but he had to be replaced by Aidan Friel in the RSC just before half-time – another player out.

Don Cowan, who was having a tremendous game against UCD on Saturday week, had to be replaced in that game and he is sorely missed due to his injury jinx. Then you go to the front men and it's unbelievable that all our main strike force are out at the moment. First of all we lost  Davy O'Sullivan and his absence is an awful blow to Alan Mathews as Davy is always a threat and keeps opposing defences busy which makes openings for  his team  mates.

Cody Mulhall, who has been in very impressive form this season and who has chipped in with vital goals,  is also out at the moment and then last week the only fit striker in the club Enda Curran had to be replaced and he was replaced by Gavin Boyne who is basically a midfielder. That is the situation in the club injury wise and no club in this country could afford to be without so many first teamers.

Next Saturday's visitors Wexford FC will come to Longford in a confident mood as they picked up their first win of the season on Friday last when they defeated another struggling team Shelbourne at Ferrycarrig Park. The only goal of the game came after only seven minutes and it was scored by midfielder Thomas Croke.

A big bonus for Wexford was the return from injury of experienced keeper Graham Doyle who has been one of the clubs best players for many years.

Since their relegation at the end of last season, Wexford have lost their former manager Shane Keegan to Galway and his former assistant Damien Locke has replaced him.

The club also lost many top players at the end of last season as quite a few have emigrated to New Zealand where they play in the national league. Manager Locke has assembled a new look team, but it may take some time for them to gel together.

Over the years games between the clubs have been close affairs and if the first meeting in Ferrycarrig Park is anything to go by this Saturday's game will be no different. Along with keeper Doyle the most experienced player in the Wexford panel is defender Ross Kenny. The defender has previously played with Athlone Town, Mervue Utd and Galway Utd.

Quite a few of the current squad have played with near neighbours Waterford Utd but not many have much league experience. Liam Donnelly and Shane Dunne have been with Drogheda Utd while another former Drogheda Utd and Longford Town player Lee Duffy is their main man up front. The striker who has unfortunately been dogged with injury for a few seasons is a talented striker who is capable of scoring great goals and will be a major threat in the Town penalty area.

John McKeon, who recently played with the Town, is also involved with Wexford and he will be a decent player in their squad if he is fully fit. Quite a few of the current Wexford squad have come from the Carlow/Wexford league and these lads have lots of experience of big games down their end of the country.

This is a game that the Town must win if they are to try and move up the league table and even though they are under strength due to injuries they should be able to pick up three valuable points. As we come up to the halfway stage of the league this weekend there is lots of football left and we will be hoping to get away from the bottom of the table promptly.

Understandably there are a lot of supporters very disappointed by the results recently and overall since the start of the season. Injuries are a major problem and we hope that our supporters will keep behind the team and the management in this trying time for the club as a whole.

One of our most loyal supporters and supporters club member Sinead Keegan has taken to facebook to express her sadness because of the actions of some people who are continuing to knock the club and the team in facebook. Sinead is a long time supporter of the club as are members of her family for many years. A very valued member of the supporters club she has now taken over the running of the club shop and tries to have all the gear up to date for our supporters. Sinead wants the team to prosper and with that in mind we need all our supporters to get behind the club at this time.