Under pressure Longford Town need a result away to Waterford 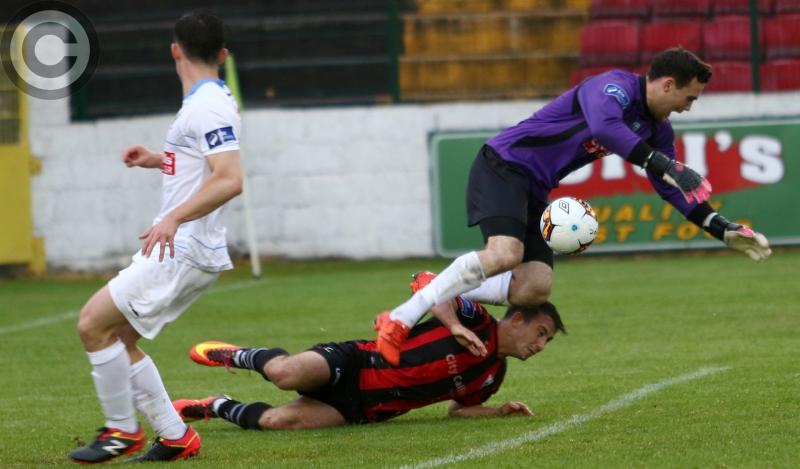 The games are coming up thick and fast and they don't get any harder than a trip to the RSC to play the league leaders Waterford this Friday night, kick-off 7.45pm.

At the beginning of the season Waterford were the favourites to gain promotion with the Town also mentioned as the main opponents to them as they chase a place at the top table of the Premier Division. A lot has been written about the serious investment being put into the club by a  local who has done very well business wise in England. His other club Swindon Town have been relegated in England and by all accounts the fans at the club are up in arms against him and blame him for the club's demotion which is a death knell for the club.

When the new chairman took over the club the first bit of business was to bring in Pat Fenlon as general manager and also bring in local Alan Reynolds as manager alongside Fenlon. Former Town player Reynolds, who is also employed by the FAI, is a very clever man and no doubt he will be hoping for promotion in his first year at the helm of the once famous club.

By all accounts Waterford have one of the highest budgets in the League in general as the new chairman doesn't want to leave anything to chance as he chases promotion in his first involvement in the club.

Waterford have undoubtedly the strongest and most experienced squad of players in the First Division and that is a big bonus when you are grinding out results as you chase promotion. The fact that the new management could go out and convince big Kenny Browne to join them from Cup holders Cork City which shows how far the new regime have gone in their chase of promotion.

They also signed Patrick McClean from Derry City to play alongside Browne. Browne has been injured for some weeks and missed the 1-0 victory over near neighbours Wexford FC last Friday night.  They also enticed the very experienced Dave Mulcahy to join the Blues revolution and the former Bohs player has an abundance of experience gained after many years in the League.

In midfield Waterford have former Republic of Ireland under 19 and under 21 player Kenny McEvoy who has returned to his home town club from Tottenham where he did very well despite being loaned out to some lower division clubs. They have a few players over on loan from Swindon Town with the very versatile Tom Smith looking a very good prospect.

They also signed Sander Puri an Estonian who has been capped over 70 times for his country. Puri had a stint at Sligo Rovers in recent years and would be known to Town supporters. Up front Waterford are very dangerous with two top class strikers in their squad. Big Mark O'Sullivan who joined the club from Cup holders Cork City is a big bustling centre forward who is very dangerous around opposing penalty areas and he has come in with a few vital goals to date.

Waterford have a very impressive record to date in this year’s league campaign having won seven, drawn four and only one defeat in their twelve games played to date. Their only defeat so far this season was at the hands of Athlone Town in the opening fixture.

When the teams met at City Calling Stadium on April 1 the game ended scoreless. Waterford, like the Town, have a lot of injuries with centre half Kenny Browne and keeper Ian McLoughlin currently out of action along with  Estonian winger Sander Puri due to a long time injury problem.

The Town's injury list has increased in the last week or so. Long term absentee Noel Haverty who is doing light training at the moment has been joined by Davy O'Sullivan and Cody Mulhall and last weekend against UCD the list got longer when we lost centre half Stephen Walsh early on in the game due to a clash of heads and then we lost influential winger Don Cowan with what looked like a hamstring injury.

Alan Matthews is lucky to have Rhys Gorman as a replacement for Walsh but unfortunately  the visitors scored the only goal of the game soon after Walsh was replaced The  Town had lots of chances to equalise if not win the game and there seems to be a big lack of confidence in front of goal.

Tristan Noack Hoffman is excelling at left full and the Arva lad was so unlucky not to get his name on the scoresheet when his 35 yarder came back off the bar with the keeper well beaten and Jake Kelly missed the rebound.

The Town are in an embarrassing position in the bottom three in the table and it's up to the players to make sure that we move up the table and that means we need a result in the RSC against Waterford this Friday night.