Longford Town are unable to break down Cabinteely in draw 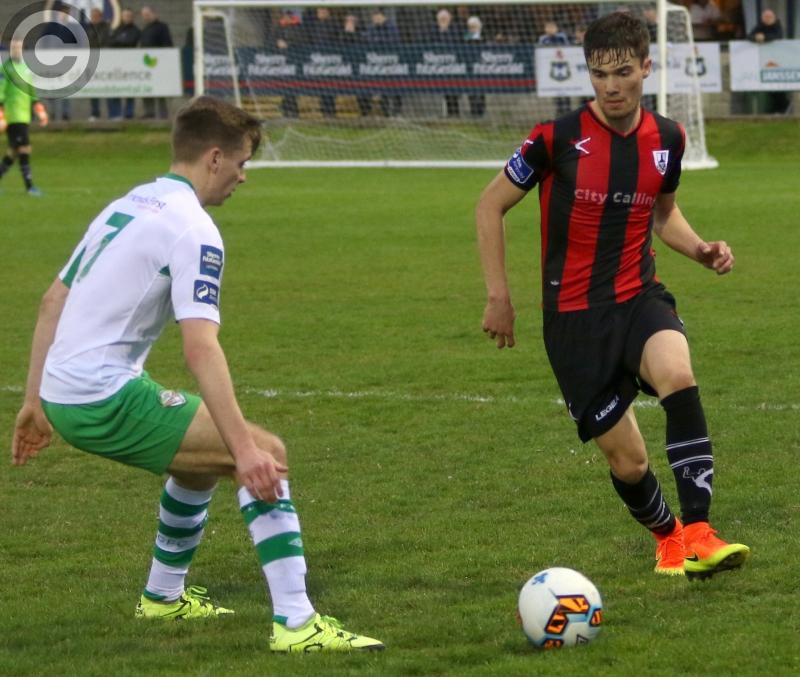 Tristan Noack-Hoffman on the ball for Longford Town against Cabinteely in the Airtricity League First Division game at Stradbrook on Saturday evening last. Photo: Syl Healy

Longford Town came up against a stubborn Cabinteely side on Saturday evening last as they were held scoreless in Stradbrook and in doing so lost further ground on leaders Waterford who are now nine points clear of the Town in the battle for the First Division title.

Longford just could not break Cabinteely down in their failure to score while the Dublin side also had chances but were denied by Town keeper Paul Skinner allied to some poor finishing.

The Town were determined to make amends for the disappointing defeat they suffered against Cabinteely at City Calling Stadium earlier in the season but finding the back of the net continues to be a problem for the midlanders who were without the injured David O’Sullivan on this occasion.

It was the visitors who had the first chance of the game with Stephen Walsh bringing a fine save out of Cabinteely keeper Mick Kelly while defender Walsh then came to the rescue when he cleared the danger with Kieran Marty Waters providing the threat.

Veteran striker Jason Byrne then directed a shot just wide of the post as the home side created another promising attack in the 20th minute.

Enda Curran squandered a glorious chance for the Town in the 25th minute when he blasted the ball  over the bar, after he was set up by Don Cowan, while Longford keeper Skinner produced a great save to deny Marty Waters in the 31st minute.

Former Town player Daire Doyle set up another attack for Cabinteely in the 40th minute, pulling the ball back for Jack Watson to tee up Jason Byrne but his header was off target.

In the 53rd minute Skinner once again kept the Town in the game when he made a brilliant save to stop Kevin Knight’s header from going in.

In another crucial Longford chance Enda Curran had a free-kick saved by the Cabinteely keeper Mick Kelly in the 74th minute.

In this same attack, Cody Mulhall broke through and was looking poised to score but he was brought down by Adam Harney in a cynical tackle that deserved a red card,  much to the anger of  Town manager Alan Mathews as the referee booked the Cabinteely defender.

Evan Galvin’s shot then went wide for the home side after a flick on from Byrne and soon after Don Cowan, who was causing problems whenever he got on the ball, cut through but his shot was too high.

The Dublin outfit tried hard to find a way past the Town defence but Tristan Noack-Hofmann, Daniel O’Reilly, Stephen Walsh and Mark Langtry stood firm to deal with the threat and no other real clear-cut chances materialised in the closing stages of the game as the sides had to settle for a point apiece.

Next up for Longford Town is a home game against UCD; another side chasing promotion, and manager Alan Mathews will be hoping that a badly needed victory will be achieved on Saturday evening next.