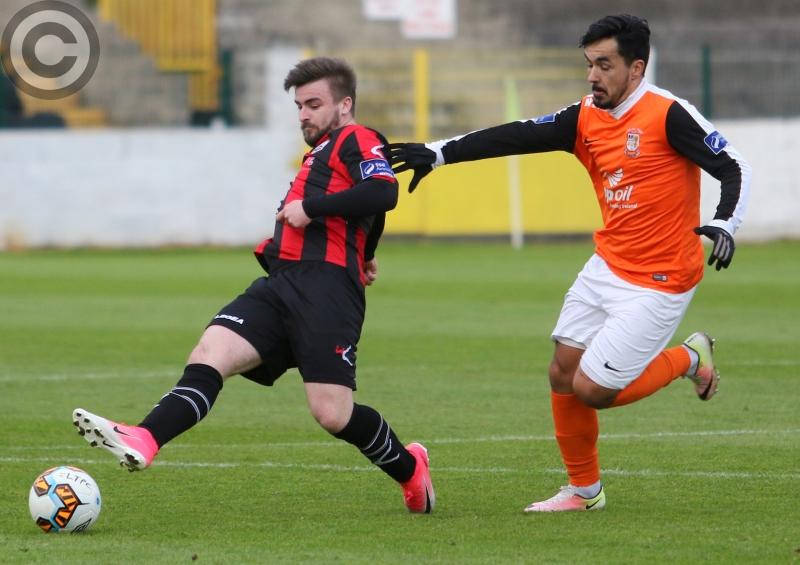 Longford Town travel to Dublin this Saturday to play Cabinteely in Stradbrook (kick-off 7pm) and looking to make it back to back wins in the First Division after their emphatic 3-1 victory over near neighbours Athlone Town at City Calling Stadium last weekend.

Athlone, who had a caretaker manager (again) in charge, started with six foreign players in their team and they also introduced one off the bench during the course of the game. With both Davy O'Sullivan and Don Cowan back to full fitness the Town started as they finished against Cobh the previous weekend. Dylan McGlade and Enda Curran were the players to miss out but Curran got an early call to action as Davy O'Sullivan limped off injured after only ten minutes and ended up scoring all three goals for Longford.

Injuries  causing many problems for the Town as when one player comes back another joins the list of injuries. David O'Sullivan is picking up a lot of injuries this season and along with Noel Haverty and Jake Kelly are really missed as we look for consistency.

After last Saturday’s victory the Town have moved up to fifth in the table on 12 points, the same as Shelbourne, while  Cabinteely are currently a point ahead of us. There is no doubt that we have to go all out for victory on Saturday evening at Stradbrook and get revenge for the embarrassing result at City Calling Stadium in the middle of March.

On that occasion the visitors went away with a 2-0 victory as the Town struggled against a physically big team. The game was only in its infancy when striker Jack Watson latched on to a ball into the box to fire past keeper Skinner in the second minute and made certain of all three points with a cracking goal from Kieran Marty Waters in the closing minutes of the match.

Cabinteely have a physically strong defence and one has to say that firing high balls into their penalty area will get us nowhere. Former Town player Victor Ekanem played in the centre of the defence in Longford and alongside Conor Keely we will not win much of the aerial battles.

This is a game when the speed and crossing accuracy of Don Cowan will be needed to get behind their defence. They could have a second former Town player in their team on Saturday as Daire Doyle,  who played with the Town, was in the starting eleven against Wexford on Friday last in a game that they drew 1-1 with the basement club.

Defender Kevin Knight gave Cabinteely the lead on 17 minutes but their lead was shortlived as Vincent Quinlan equalised for Wexford four minutes later. Cabinteely have big Christian Lotefa in the middle of the park and this commanding player looks to be a very useful player.

The Town need Kevin O’Connor and Dean Zambra to be controlling midfield as we chase three more points to push us up into the top half of the table. Saturday's game could decide where we are going this season as a win will push us past our opponents and also have us chasing the top three.

The official attendance for last Saturday's game at City Calling Stadium was 407 which is an improvement on recent games but we need to at least double that and hopefully the stay away supporters will come out in bigger numbers for the next home game against UCD on Saturday week.

Now that the home record has improved considerably we now want to tighten up at the back, don't give away any more presents and then we can try and close the gap on UCD, Waterford and the new league leaders Cobh Ramblers.