Longford Town confirm superiority over Athlone in the midlands derby 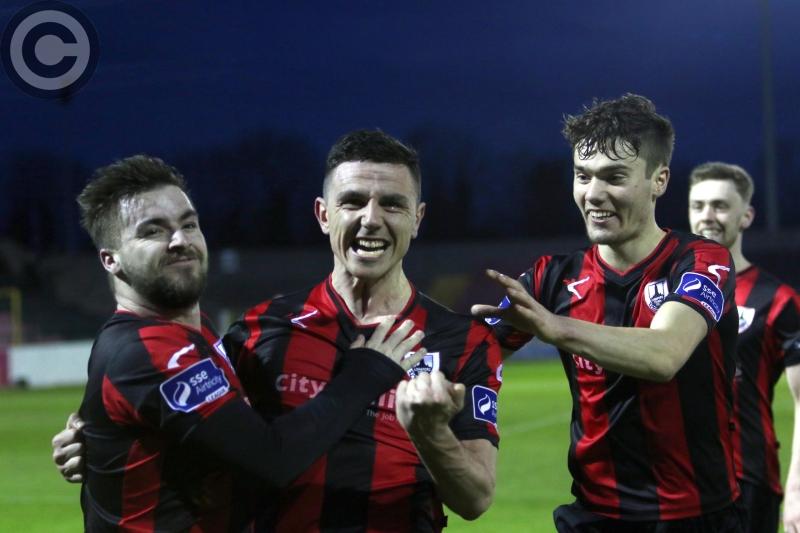 It has been a season of mixed fortunes so far for under achieving Longford Town, considering the generally experienced squad that manager Alan Mathews has assembled, but the record against Athlone is impressive as another midlands derby was won on Saturday evening last.

Hat-tricks are the recurring theme and after David O’Sullivan scored three goals in the Airtricity League and EA Sports Cup games at the Lissywollen grounds, Enda Curran repeated  the feat as the Town emerged victorious again in the third meeting of the neighbouring rivals in the current campaign.

Having said that, Longford made hard work of beating a poor Athlone outfit in the First Division clash at windy City Calling Stadium but the result was all that mattered with Enda Curran the hat-trick hero.

The biggest attendance of the season, 407, watched the home side collect all three points and ironically Curran did not start the game but was brought on when his fellow striker David O’Sullivan was forced to retire injured with just ten minutes gone on the clock.

Curran was credited with breaking the deadlock in the 23rd minute when a penetrating cross from Don Cowan, a constant threat down the right wing, was parried by the Athlone keeper Igor Labuts with the ball ending up in the back of the net following a goalmouth scramble.

Longford had a very lucky escape later on when Athlone’s lone striker Walter Invernizzi struck a rasping shot against the underside of the crossbar in the 38th minute and the general opinion was that the ball had crossed the line but there was no flag from the linesperson.

Longford Town then scored a second goal in the 40th minute direct from a free-kick outside the box when Enda Curran’s effort crossed the line following a poor saving attempt from the Athlone keeper Labuts.

While Athlone were thrown a lifeline when Dragog Sfrijan smacked the ball to the net in the 44th minute, they never really looked like getting the equalising goal in the second half and were reduced to ten men when substitute Jason Molloy was sent-off in the 80th minute.

Molloy was just a couple of minutes on the pitch when he received a straight red card for a robust foul on Enda Curran and Athlone’s tale of woe was complete in the third minute of stoppage time when the ball broke kindly for Curran who directed a well executed lob over the stranded opposing keeper Labuts into the back of the net.

There were other scoring chances in this generally scrappy encounter that did little to instill belief about a possible promotion challenge with the Town eight points behind the surprise leaders Cobh Ramblers but there is a long way to go in the battle for the league title.

After losing to Cobh down in Cork last weekend, it was crucial that Longford got back on the winning trail immediately but it took them a while to break down the stubborn resistance of a defensive Athlone side.

Town defender Daniel O’Reilly had a goal attempt blocked down in the 19th minute and moments later a deflected shot from Athlone’s Dragog Sfrijan was stopped by Longford keeper Paul Skinner at the expense of a fruitless corner.

Then came the opening goal created by Don Cowan and after Athlone hit the crossbar, Enda Curran converted a free-kick for the second goal in the closing stages of the first half.

There was still time for the visitors to close the gap as they trailed 2-1 at half-time and with a couple of minutes gone on the changeover they had a half-chance to equalise when a shot from Jason Lyons was blocked.

The best opportunity for Longford to score again in a poor second half fell to Enda Curran whose close range header was parried over the bar by Athlone keeper Labuts, who produced a fine save to keep his net intact on this occasion, and also did well to keep out efforts from Gavin Boyne and Don Cowan as the game stuttered to a conclusion.

A third goal eventually materialised for the Town in stoppage time when Enda Curran kept his composure to direct the ball into the back of the net, much to the delight of the home supporters who will be hoping for another positive result in the league away to Dublin club Cabinteely on Saturday evening.