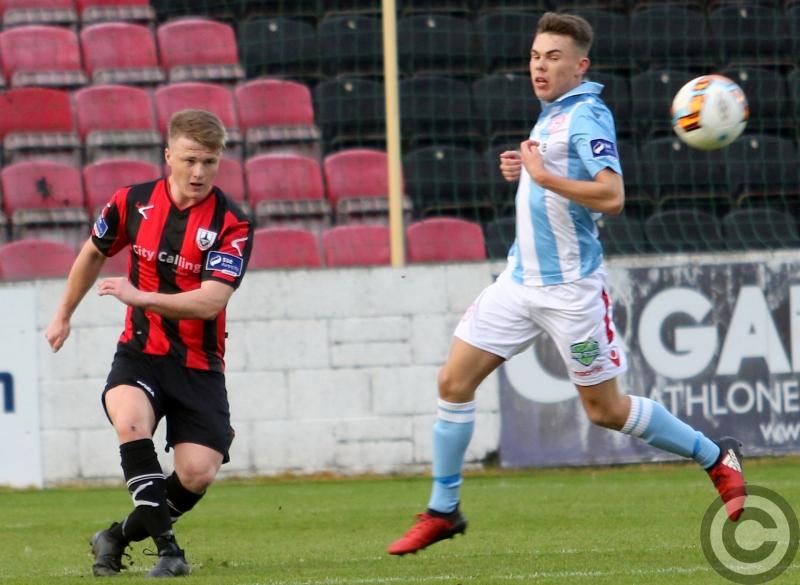 It was  a long time coming. Well 17 months and two weeks to be exact for Longford Town to finally register a win at home. A 4-2 success over Derry City at the end of October 2015 was the last time the Town emerged victorious in a league game at City Calling Stadium.

On Saturday evening last they finally ended that frustrating barren spell and in doing so registered only their second win of the season in the Airtricity League First Division.  It was a much needed win as manager Alan Mathews admitted: “It’s a bit of a monkey off our back in the sense that we needed to win to get back into contention in the league. It’s the second round of fixtures and we want to improve significantly on our first round performances and results.”

The Town had to come from behind to get the vital three points after Shelbourne broke the deadlock with just three minutes gone on the clock with Dayle Rooney scoring the goal for the visitors.

In the 16th minute Longford were back on level terms when Kevin O’Connor’s free-kick was met by Enda Curran and he sweetly volleyed the ball to the net for his first goal of the season.

Twelve minutes later and the Town were awarded a penalty. Alan Byrne poor clearance fell to Curran who raced inside the box but was taken down by Shels keeper Dean Delany. Curran easily dispatched the spot-kick to give Longford the lead.

Mathews was delighted for Curran to finally get off the mark: “He played very well. He got two goals and he will be applauded for them. His contribution was very good and he caused them trouble. Overall he played really well and I’m delighted for him.”

Four minutes from the break the matchwinner Curran was denied his hat-trick by a fine save from Delany who made amends for giving away the penalty.

In the 48th minute a free-kick from Rooney just went inches wide as Shels tried to get back on level terms. James English then wasted a good chance after receiving the ball in a good position.

The Town got their third goal in the 62nd minute with a fantastic long range strike from captain Kevin O’Connor clinching the badly needed win.

The Town boss was pleased that his side put away their chances: “We have drawn too many games. Four clean sheets out of seven games but we didn’t score goals, thankfully that has now changed.”

With a two goal cushion the Town were able to sit back and despite Shels having possession they were denied on a number of occasions by good defending by the Town. Adam Evans, in particular, was a threat for the Dublin club.

Shels did feel hard done by on two occasions in the second half and felt they should have been awarded penalties. Mathews was honest and believed that Town, for a change, got lucky breaks: “We got a few breaks with a  couple of decisions perhaps going our way. Over the course of a season they will even out.”

Shels introduced Chris Lyons and David O’Leary in the hope they could create something and get back into the game but they failed to trouble Town keeper Paul Skinner.

It was a much needed win and the Town need to build on this positive result.  “I said on numerous occasions that I cannot fault them for their work-rate, their application and how they go about preparing for games. Things have not gone our way at times. They are a very committed bunch of lads and now that we have managed to win at home again let’s build on it,” said the pleased manager Mathews.