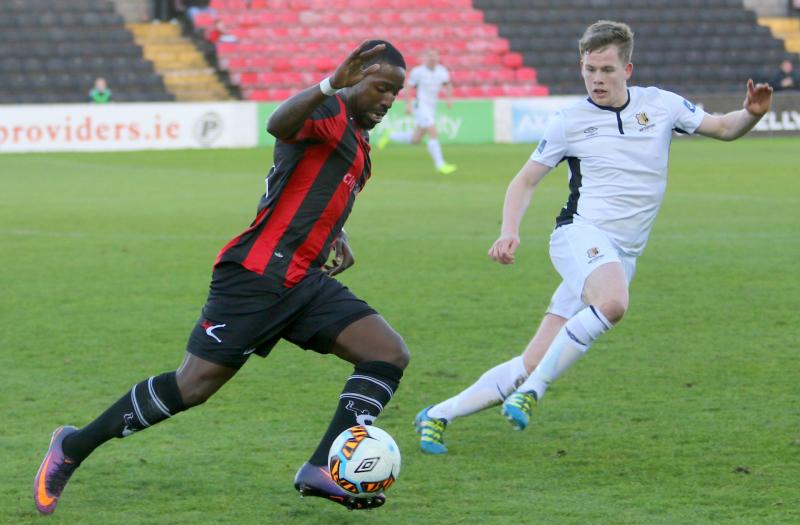 While Longford Town are still searching for their first home win in the league this season following the scoreless draw against Waterford at City Calling Stadium on Saturday night last, manager Alan Mathews can take some positives out of the performance.

Town keeper Paul Skinner pulled off an excellent save to deny Mark O’Sullivan from the penalty spot in the 34th minute and Waterford were reduced to 10 men in the 56th minute when Davy McDaid was sent off for a rash tackle on Mark Langtry.

With the numerical advantage, the Town then took the game to Waterford but for all the chances they created they could not  get that elusive goal to win the match.

After defeats in their previous two games Alan Mathews was pleased that his side halted their recent poor run but admitted that the  game could have gone either way. “We could have been a goal down with Paul Skinner making a wonderful save from the penalty. We did have plenty of chances and the good thing  was there was much more appetite, desire and hunger in every aspect of our play. I’m disappointed we didn’t win but I’m very satisfied with the quality and the level of performance that we produced”

Waterford  bossed the first half with Skinner pulling off two fine saves to deny McDaid in the opening 30 minutes and keep his goal intact.

In the 33rd minute referee David Keeler adjudged that Mark Langtry fouled Mark O’Sullivan; whether it was a foul was dubious but it was outside the box. Despite Town’s protests the penalty was given but Skinner pulled off a terrific save to deny O’Sullivan.

Kenny Browne headed over minutes later while McDaid should have done better after a poor kick from Skinner.  The Town didn’t create any clear-cut chances with just a few crosses into the box.

In the 56th minute Waterford were reduced to 10 men after McDaid went in hard on Langtry (the player required stitches to the wound) but Longford failed to capitalise on the extra man advantage.

Mathews believes that his side can compete with the best in the First Division when they put in the performance they are capable of. “There’s very little between all the sides. Everybody is capable of beating everybody. We will see how it evolves as the season progresses. A couple of positive results could put us right back into the mix for promotion. We have been very disappointed with our performances and results prior to the Waterford game so let’s push on from here and move up the table. We need to play consistently well and the players are fully aware of that.”

David O’Sullivan was unlucky not to break the deadlock in the 58th minute and while  the Town kept pressing Waterford broke after a Town corner with Kenny McEvoy racing to the endline and he took a shot but Dean Zambra got back to avert the danger.

Waterford defender Patrick McClean cleared O’Sullivan’s effort off the line in the 75th minute and in the 84th minute Tristan Noack Hofmann’s perfect cross met the head of O’Sullivan but he directed the ball over the bar.

Waterford could have been down to 9 men near the end after Mark O’Sullivan lost his cool in  lashing out  but the referee issued a yellow card.

O’Sullivan had one more  chance for the Town in the 90th minute but his volley was deflected out for a corner as the home side had to settle for a point.

Mathews hopes his side can build on this positive result. “You have to start somewhere; you have to get your first win at home but we had to settle for a draw.  Waterford are top of the table but we were as good as them on this occasion so that is encouraging.”