Still no home win as Longford Town lose out to Cabinteely 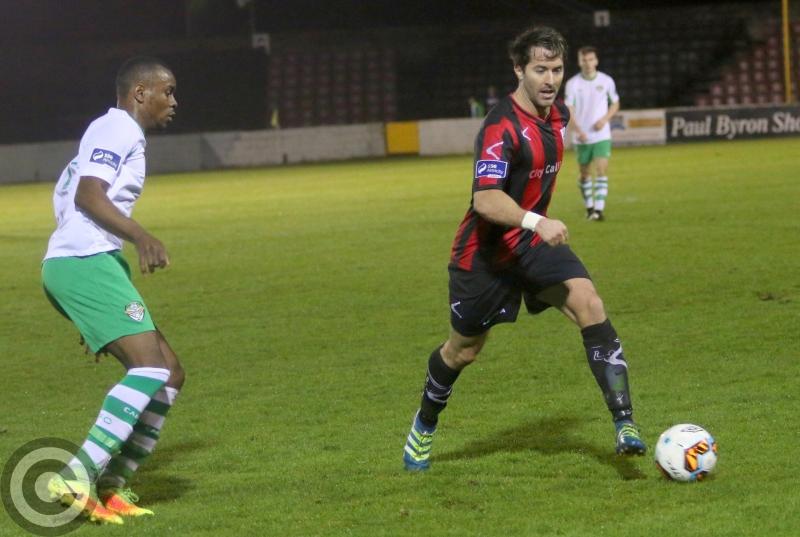 Rattled by a Cabinteely goal with just two minutes gone on the clock, Longford Town were unable to salvage the situation as they suffered a surprise defeat against the league newcomers at City Calling Stadium on Saturday night last.

Without a home win in the Airtricity League since October 2015, the wait goes on for the midlanders much to the sheer frustration of the Town supporters among the disappointing official attendance of 321 who braved the cold weather to witness this poor performance which will have given manager Alan Mathews some serious cause for concern.

Touted as First Division title contenders at the start of the season, Longford were confidently expected to conquer Cabinteely in a historic first ever league meeting between the clubs but it failed to materialise.

Stunned by a terrible start as Jack Watson scored for the Dublin outfit after latching on to a long ball into the box to hit the target, the Town almost conceded a second goal when the Cabinteely dangerman Kieran Marty Waters hit the crossbar in the 10th minute.

The home side gradually got their act together and David O’Sullivan (after scoring a hat-trick in the win over Athlone the previous week) wasted a glorious opportunity to equalise in the 19th minute when he directed a free header from a few yards out inches wide of the post in failing to punish a mistake by the opposition.

Prior to that great chance, defender Daniel O’Reilly headed wide from close range after connecting with a Jake Kelly corner and Cabinteely had a very lucky escape in the 34th minute when Gavin Boyne shot against the crossbar in a goalmouth scramble.

Unfortunate not to be on level terms at the break, the general opinion was that Longford Town would get at least a draw but they struggled against the stiff wind in the second half with Cabinteely keeping it very tight at the back to consolidate their grip on the game.

Sticking to a most effective game plan devised by their vastly experienced manager Pat Devlin, the visitors were determined not to let victory slip from their grasp as they soaked up the pressure.

Longford Town Kevin O’Connor should have done better with his goal attempt that drifted off target and in this same attack in the 65th minute Jake Kelly shot straight at the opposing keeper Michael Kelly with a tame effort.

Moments later, half-time substitute Cody Mulhall was narrowly off target with a good effort and with the Town pressing for the equaliser some gaps were left at the back with Cabinteely always a threat on the counter-attack.

Cabinteely were generally comfortable for the remainder of the game before they made absolutely certain of collecting all three vital points when a delightful flick on by substitute Jason Byrne ended up with Kieran Marty Waters firing a cracking shot to the net in the 90th minute.

It was a touch of class by the veteran striker Byrne, who was only on the pitch a short time, and the clean through Waters made no mistake with a superb finish that gave the Town keeper Paul Skinner no chance whatsoever.

Things will want to improve quickly for Alan Mathews and his players in the quest for the sole promotion spot, starting with a tricky away game against UCD on Saturday night next with the title favourites Waterford the visitors to City Calling Stadium the following week.