Longford Town at home to Cabinteely 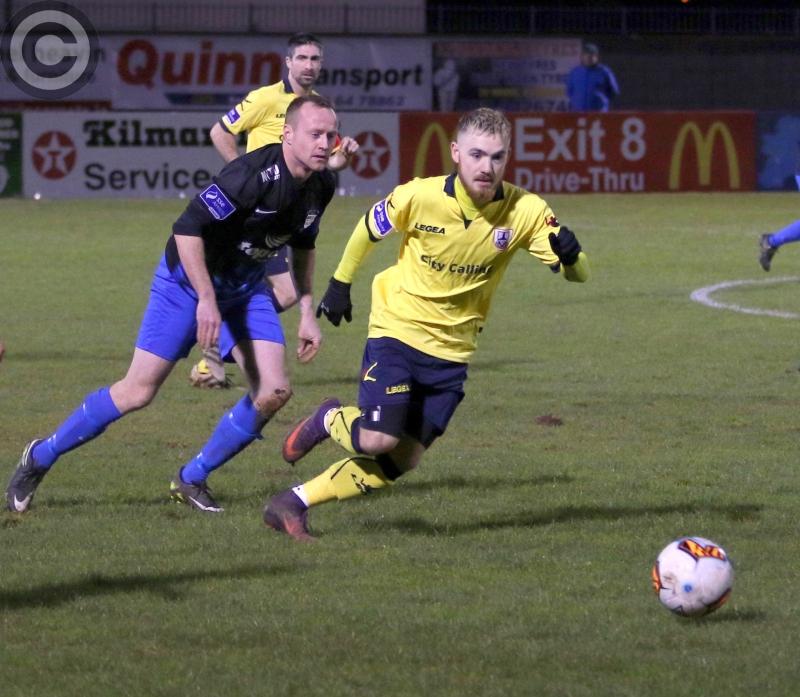 Dylan McGlade on the attack for Longford Town against Athlone. Action from the Airtricity League First Division game at the Lissywollen grounds. Photo: Syl Healy

The League's newest club Cabinteely make their first ever League appearance at City Calling Stadium this Saturday night when Alan Mathews will be in opposition to Pat Devlin in what should be an exciting encounter, kick-off 7.30pm.

Actually when you look at the Cabinteely club it has a big Bray Wanderers look about it. Both Pat Devlin and Eddie Gormley who basically run the football end of things at the club are both former Bray people and their doctor Joe Curry is another ex Bray man.

Not only do they have former management in the club but they also have some former players also. Kieran Marty Waters who joined the club this season is a former Bray player who also played with UCD and Shamrock Rovers. Young defender Kevin Knight also played with Bray when he returned from England where he  played with Leicester City.

The squad also included Daire Doyle who had a stint with the Town and Robbie Keane's cousin Jason Byrne is also on their books for the coming season. Another former Town player Victor Ekanem was back in defence on Friday last after being out of the game recently due to injury.

Keeper Michael Kelly, who started out at  Cherry Orchard, is by all accounts a very sound keeper and at 6ft 5 inches he is one of the tallest in the League. Michael also had a stint with Shamrock Rovers under 19s.

It's interesting to note that the majority of the Cabinteely squad are in the 18-20 age bracket which is a move in the right direction for the fledgeling club. Over the years new clubs went with many ex pros and if they weren't an instant success they could break the clubs.

This season Cabinteely had a very hard start to their league campaign with a home game against UCD and an away game against Waterford at the RSC. By all accounts they were very unlucky to lose 1-0 to a very good UCD side while the favourites Waterford did a very professional job to pick up three points after their surprise defeat to Athlone Town in their opening game.

On Friday night last Cabinteely played relegated Wexford at home and recorded their first victory of the season. The scoreline of 2-0 by all accounts didn't do them justice as two goals from former Dundalk under 19 player Joe Doyle moved them off the bottom of the table.

The Town travelled the short journey to Athlone to play our midland rivals in the first midlands derby of the season. After the poor showing the previous weekend against Cobh Ramblers at City Calling stadium the team had to go out and try and erase the humiliation of that awful performance and they did just that with a most emphatic 3-0 win.

Alan Matthews had to plan for this game minus three very experienced players. Rhys Gorman, who played against Cobh but who had to retire injured, joined Noel Haverty and Don Cowan on the injury  With a shortage of defenders Alan Matthews moved Daniel O'Reilly from left full to centre half alongside Stephen Walsh and brought in winger Mark Langtry at left full and the former UCD man did a marvellous job both in defence and also going forward and he was instrumental in a couple of the Town goals.

This  was a very good performance from the team as a whole but one has to compliment Davy O'Sullivan on his first goals the season in hitting a hat-trick. That big win against Athlone will mean nothing if we don't get a result this Saturday night against Cabinteely.

Longford Town play Cabinteely this Saturday night at City Calling Stadium in what will be an historic first ever league game between the two clubs.

Manager Alan Mathews spoke to www.ltfc.ie ahead of the game and this is what he had to say:

“Out are Noel Haverty, Don Cowan and Rhys Gorman with continuing injuries and we will see how Enda Curran is but he should be okay though. We are looking forward to the game and want to build on the good result and performance last week."