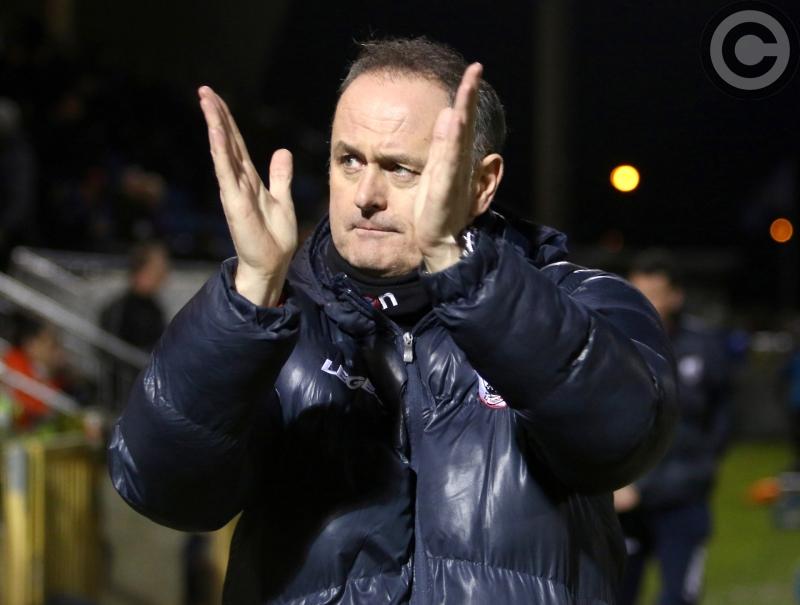 A very satisfied manager Alan Mathews showing his appreciation for the Longford Town supporters following the 3-0 away win over Athlone in the league on Friday night last. Photo: Syl Healy

Longford Town registered their first win of the season in the Airtricity League and the star of the show was David O’Sullivan who was back to his lethal best to score all three goals against Athlone at the Lissywollen grounds on Friday night last.

O’Sullivan broke the deadlock in the 14th minute, latching on to a clever back hell from Gavin Boyne, and the Town striker got his second goal from a powerful header in the 42nd minute after connecting with a corner taken by Mark Langtry.

Trailing 2-0 at the break, whatever hopes Athlone had of getting back into contention were completely dashed when the impressive O’Sullivan found the back of the net again in the 48th minute to complete his hat-trick.

Following the defeat against Cobh Ramblers at City Calling Stadium the previous week, Longford Town manager Alan Mathews wanted a reaction from his side and he got just that in a most emphatic victory.

Speaking after the game Matthews said: “We played well and should have scored a few more goals. What we got was a positive reaction to what was a disappointing result against Cobh last weekend. We kept a clean sheet as well so there are a lot of positives. We defended well as a team. Every single one of them defended well when they had to.”

Athlone did squander a few chances during the course of the game but Stephen Walsh was a rock in the heart of the Longford defence as his side keep a clean sheet. Up front David O’Sullivan was his usual busy self and took his three goals very well.

His first goal came after 14 minutes when Gavin Boyne’s back hell fell nicely to O’Sullivan and he made no mistake to score his first goal of the season. Three minutes from the break O’Sullivan got his second goal when he powerfully headed home Mark Langtry’s corner from the right.

It didn’t take O’Sullivan long to complete the hat-trick when three minutes into the second half Jake Kelly’s cross was volleyed across the goalmouth by Langtry and O’Sullivan was on hand to slam the ball to the net.

Alan Mathews was pleased for O’Sullivan: “It was really good for David to get off the mark. He had a couple of chances in the previous games and missed a penalty against Shelbourne. Tonight he was really at his best.  I’m delighted for him to get a hat-trick.”

Longford enjoyed most of the possession in the opening exchanges but it was the home side that had the first chance when Conor Barry shot wide when in the perfect position in the 13th minute.

That proved a costly miss because one minute later Longford broke the deadlock. Barry came close again for the home side in the 31st minute and then three minutes later Jose Viegas missed a chance to draw Athlone level.

Longford showed  how to finish when just before the break O’Sullivan doubled the advantage with his second goal of the game. With three minutes gone on the changeover O’Sullivan netted a third goal and there was no way back for Athlone.

Athlone tried hard to pull a goal back with Viegas shooting straight at Skinner in the 58th minute. Town keeper Skinner then denied  Jason Lyons minutes later while Kirlis Grigorovs should have done better with his low shot that just went inches wide in the 68th minute.

Skinner saved from substitute Jason Molloy two minutes later as the home side kept piling on the pressure but the resolute Longford defence held firm in keeping their net intact.

Longford had a few other opportunities but they could not add to their tally as they collected all three valuable points in comfortable fashion.

Alan Mathews is hoping they can build on this win over Athlone for the next league fixture at home to Cabinteely on Saturday night. “We will go again next weekend, taking one game at a time. All we have to do is play to our potential week in week out but that is easier said than done. We will train and prepare properly as always. If we play as well as we can then more positive results will materialise.”