Setback as Longford Town slip up at home to Cobh Ramblers 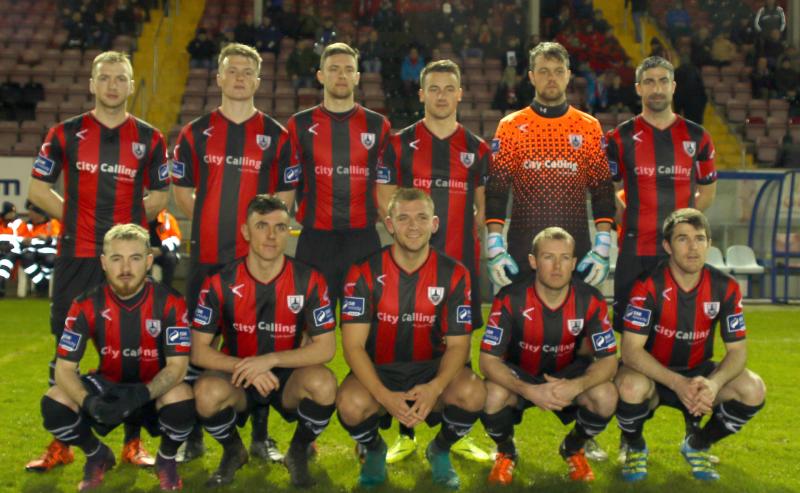 The Longford Town team that started against Cobh Ramblers in the first home game of the season in the Airtricity League First Division on Saturday night last. Photo: Syl Healy

The season is only two games old but already Longford Town are playing catch up in the quest for the Airtricity League First Division title after slipping up against Cobh Ramblers at City Calling Stadium on Saturday night last.

Without a home win during the entire Premier Division campaign last year, it was very frustrating for the loyal Town supporters among the small official attendance of 320 who had to endure a disappointing defeat that was as miserable as the current bad weather.

On the evidence of this poor performance, manager Alan Mathews has a lot of work to do to turn Longford Town into serious contenders for the sole promotion spot and he will be hoping for a positive result in the next round this Friday night away to neighbouring rivals Athlone who have made a great start with wins at home to Waterford and away to Wexford.

The Town were strongly fancied to collect all three points against Cobh last weekend but it failed to materialise and all the damage was done in the second half with Cobh scoring two goals in the space of three minutes.

Having said that, it would probably have been a different story but for the fact that Enda Curran squandered a glorious opportunity to break the deadlock after somehow shooting wide with the goals at his mercy immediately on the changeover.

The ball broke at the feet of Curran following a save by Cobh netminder Paul Hunt (the former Town keeper) but the new striker failed to hit the target in the 47th minute much to the sheer dismay of the home crowd.

That turned out to be a very costly miss for Longford (without injured duo Don Cowan and Noel Haverty) as Cobh took the lead through impressive midfield playmaker Karl Caulfield who burst his way through to blast a cracking shot to the roof of the net in the 59th minute.

The visitors almost scored again soon after when Ian Mylod had his shot well saved by Town keeper Paul Skinner but the same Cobh player made no mistake when he beat the offside trap on his way to directing the ball into the back of the net in the 62nd minute.

Things went from bad to worse for Longford when they conceded a third goal in the 80th minute, a fine finish from the head of substitute Kyle McNamara after he connected with a terrific right wing cross from Stephen Christopher.

Losing badly in the first home game of the season was hard to take, although the disgruntled Town supporters had something to shout about when substitute Cody Mulhall scored a scrappy consolation goal in the fourth minute of stoppage time.

A shot from substitute Jake Kelly was saved by Paul Hunt but Mulhall pounced to scramble the ball over the line on the stroke of the full-time whistle.

Solid at the back and generally well organised in a 4-5-1 formation, Cobh created a few dangerous attacks in the first half and went close to scoring as early as the 7th minute when Karl Caulfield had a close range shot stopped in fine fashion by Paul Skinner.

That was a lucky escape for Longford who went on to enjoy a dominant spell with Gavin Boyne, Enda Curran and Daniel O’Reilly all having chances of opening the scoring before Ian Mylod had a goal attempt for Cobh in the 18th minute but his shot was blocked by Town defender Rhys Gorman.

Boyne had a couple of other opportunities for the home side which came to nothing before Cobh threatened again through Karl Caulfield who made a mess of his attempted chip when in a good position to score in the 42nd minute.

The Town were unable to match the driving force of Caulfield in the midfield sector throughout the game and it was he who fired Cobh in front with a terrific finish that proved to be a shattering blow for the midlanders who conceded another couple of goals in this severe setback.