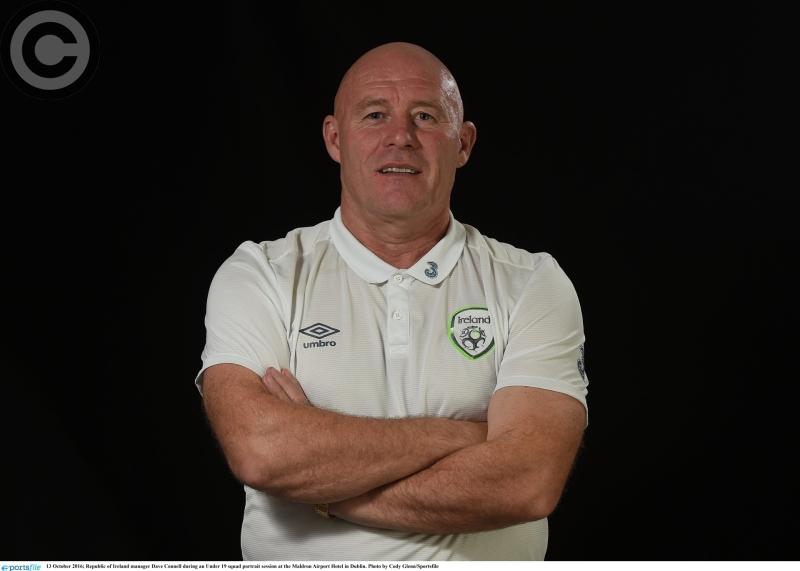 Head coach of the Republic of Ireland Women's Under 19s squad, Dave Connell, who lives in Longford.

Dave Connell, head coach of the Republic of Ireland Women's Under 19s squad, is hoping his side can put victories back-to-back at the UEFA European Championship qualifying series today.

Ireland play Wales at 1.30pm Boris Trajkovski, Skopje in the second of their three games. Earlier this week, Ireland recorded an emphatic 10-0 victory over the host nation FYR Macedonia. Their third game is against Italy on Sunday.

Leanne Kiernan netted four times, while Niamh Prior and Alex Kavanagh got two apiece, and Jamie Finn and Eleanor Ryan-Doyle scored one each.

With 23 attempts on target, Ireland completely dominated their first game in Group 2, where they occupy top spot alongside Italy who overcame Wales 6-0, and the performance pleased head coach Dave Connell, who lives in Longford.

The experienced Connell is refusing to get carried away after one result as he knows there is still room for improvement and that momentum will be crucial ahead of today’s clash with Wales.

"We were expected to win by some onlookers but the manner in which we went about our performance was particularly pleasing. The aim was to come away the three points and we that in a convincing manner," said Connell.

"We'll now work on our recovery and look ahead to the Wales game which is coming up very quickly."
Connell paid tribute to the development of the Continental Tyres Women's National League with nine of the 10 goalscorers currently playing in the League, while Jamie Finn previously lined out for Raheny United and Shelbourne Ladies.

"The Women's National League has been a huge help to myself and to the players. I deal with the coaches and clubs across the country on a regular basis and the culmination of the girls playing tougher games on a regular basis is the improvement in the standard," he said.

"We still have a long way to go but the progression has been encouraging. Leading 4-0 at half-time, Ireland were never going to loosen their grip on this game and they continually cut open the opposition's backline through slick passing and clever movement.

Clinical finishing, however, proved to be the theme of the day as Shelbourne striker Kiernan marked her competitive debut at this level with four goals and three assists.

Macedonia had Aleksandra Milanovska sent off for collecting two yellow cards, but Connell's team hardly needed a numerical advantage as they turned on the style in the second period to secure a deserved victory.