Town crushed by Derry City as league woes mount up 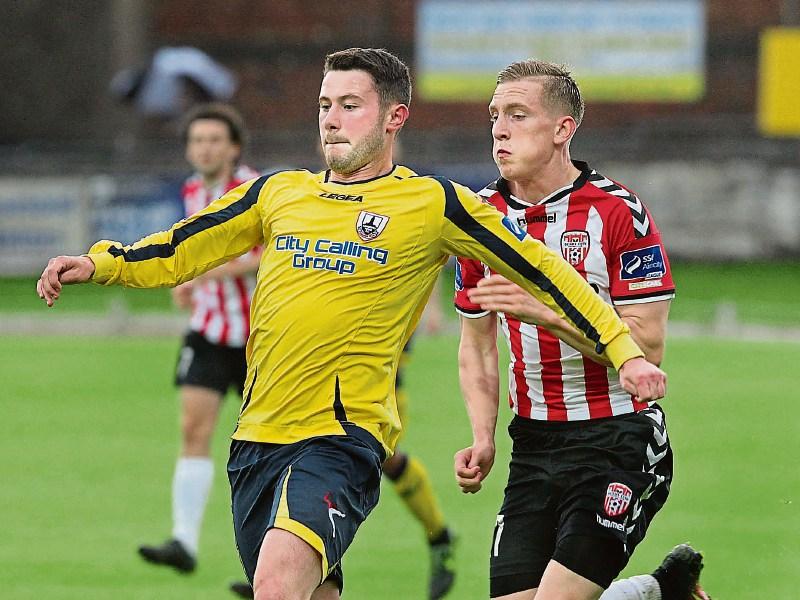 Without a win in the league since the opening day of the season when they won away to Wexford Youths, the struggle continues for Longford Town who crashed to a crushing defeat against Derry City at the Brandywell on Friday night last.

14 fixtures remain in the fierce battle to avoid automatic relegation from the Premier Division and it is not looking good for under pressure manager Tony Cousins who is still in the job despite the terrible results in the 2016 league campaign.

Next up for Longford Town are massive home games against Sligo Rovers (on Saturday next) and Galway United and it is hard to believe that the midlanders have failed to win a league fixture at City Calling Stadium this season.

And for the sixth time in the Premier Division this year, the Town finished the game with 10 men after Kevin O’Connor was sent off for a second yellow card offence just before the break and he was also red carded against Bray Wanderers earlier in the season.

Longford are still four points adrift at the bottom of the table behind 11th place Wexford, who have a game in hand, and even the hope of claiming the play-off position does not look great.

Tony Cousins decided to give his new signings their debuts for the Town at the Brandywell; Ryan Coulter in goals, Yann Mvita Nkelu in defence and Eddie Dsane who started up front.

It was a poor performance from Longford, who offered very little throughout and never really tested Derry keeper Ger Doherty. It could have been a bigger win for the home side as Rory Patterson blasted a penalty over the bar but he did make amends when he scored the fourth goal in the closing stages.

With nine minutes gone on the clock, Town keeper Ryan Coulter was forced into making an excellent save to deny Conor McCormack from giving Derry the lead and City created another good chance In the 25th minute when Nkelu did well to divert McCormack’s strike out for a corner. Noel Haverty then cleared Aaron McEneff’s effort off the line as Derry piled on the pressure.

After McEneff set-up Barry McNamee who directed his shot over the bar, the deadlock was eventually broken five minutes from the break when Kevin O’Connor handled Nathan Boyle’s effort in the box and a penalty was awarded with Eneff making no mistake from the spot kick.

Soon after O’Connor was booked for a second time, this time for bringing down McEneff, and Longford were forced to play the second half with 10 men.

Derry doubled their advantage in the 62nd minute when substitute Lukas Schubert finished a pass from McCormack to the net and in the 70th minute City were awarded a second penalty after Town defender Pat Flynn took down Schubert in the box, only for Rory Patterson to miss the spot kick.

In the 74th minute Derry got their third goal it was hard luck on new Town keeper Ryan Coulter, who made a fine save from Patterson but Barry McNamee pounced on the loose ball to find the back of the net.

Things went from bad to worse 10 minutes later when dominant Derry scored their fourth goal; substitute Joshua Daniels found Patterson and he made no mistake from close range to complete the demolition job.