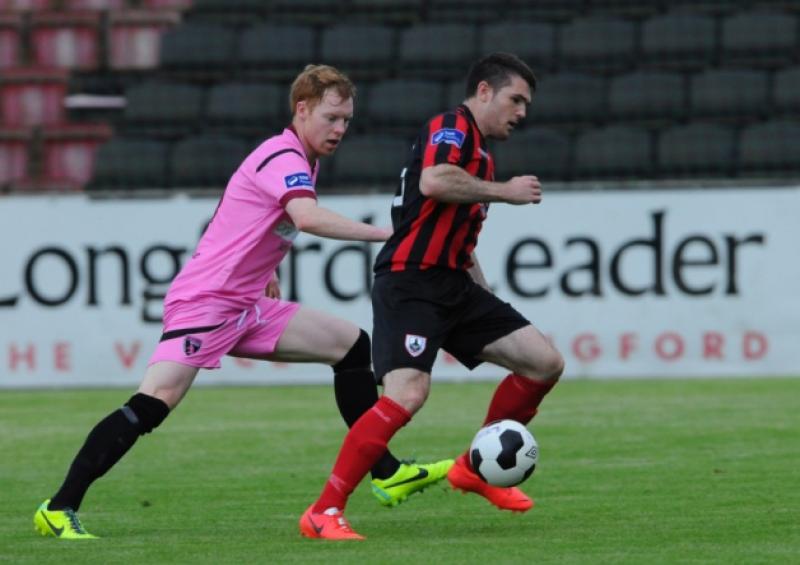 Top of the table Longford Town scored a hard fought win over Wexford Youths, a significant three league points gained from the game in hand that was watched by an attendance in the region of 500 at City Calling Stadium on Tuesday evening of last week.

Top of the table Longford Town scored a hard fought win over Wexford Youths, a significant three league points gained from the game in hand that was watched by an attendance in the region of 500 at City Calling Stadium on Tuesday evening of last week.

The Town were 3-0 up and in complete control when against the run of play Wexford pulled a goal back in the 29th minute through Danny Furlong and ten minutes later the same player got a second from the penalty spot.

But just before the break the visitors were reduced to 10 men when Dean Broaders was sent-off for a reckless challenge on Town defender Willie Tyrrell, who was subsequently stretchered off. While Longford dominated the second half, they squandered a number of chances but done enough to stay in front until the final whistle.

The Town broke the deadlock in the 12th minute when David O’Sullivan directed a close range header into the back of the net for his 16th league goal this season and a second was scored in the 17th minute when Gary Shaw headed home a cross from Lorcan Shannon.

It was all Longford at this stage and they got a third goal in the 24th minute when Kevin O’Connor’s speculative cross ended up in the net, deceiving the Wexford keeper who was put under pressure by the presence of Town defender Pat Flynn.

However, Wexford hit back with a goal from Danny Furlong before Peter Hynes with a poor finish wasted a good chance for Longford in the 31st minute. In the 39th minute, Wexford were awarded a penalty and Furlong made no mistake from the spot-kick but his side were reduced to 10 men in the 42nd minute when Broaders received a straight red card for the heavy tackle on Tyrrell.

With the extra man advantage, the second half belonged to Longford but they were wasteful in front of the posts. O’Sullivan and O’Connor had chances while Wexford keeper Doyle pulled off a point-blank save to deny Noel Haverty in the 73rd minute but the Town held on for their ninth league win in a row.