Longford Town come from behind to beat Waterford 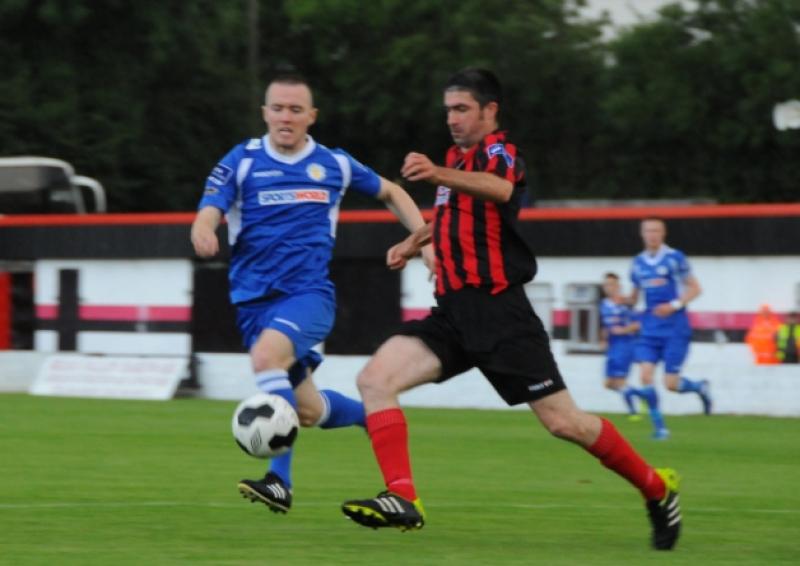 Longford Town came from behind to beat Waterford United at City Calling Stadium on Saturday evening last and are now six points clear at the top of the First Division table.

Longford Town came from behind to beat Waterford United at City Calling Stadium on Saturday evening last and are now six points clear at the top of the First Division table.

Waterford had deservedly taken the lead in the 15th minute when Stephen Grant scored but the Town drew level in first half stoppage time through Gary Shaw. Shaw then grabbed his and the Town’s second goal in the 70th minute before his strike partner David O’Sullivan was on target seven minutes from time to clinch the vital win.

Longford had early claims for a penalty turned down when Don Cowan appeared to be fouled in the box by Waterford defender Shaun Corcoran but referee Rob Hennessey decided to book Cowan instead. The first chance on goal came in the 12th minute when Brian Nolan tested the reflexes of Town keeper Paul Hunt.

Three minutes later and Waterford broke the deadlock with a terrific strike from Stephen Grant from about 25 yards out. It was the first time the Town went behind in a league game since the defeat to Shelbourne in May.

Minutes later Grant had a chance to grab his second goal but he decided to play the ball out wide to Nolan, who whipped in a cross which Pat Sullivan cleared.

The Town struggled to get into the game and their first real effort on goal didn’t materialise until the 30th minute when David O’Sullivan brought a good save out of Waterford keeper Kevin Burns.

A decent cross from Cowan minutes later was well cleared by Waterford defender Pat Fitzgerald as the home side gradually began to create chances. Burns then saved a free-kick from Rhys Gorman in the 38th minute.

Just before the break Waterford felt they should have had a penalty but Willie John Kiely was booked instead and Longford broke down the field and Cowan’s cross was finished to the net by Shaw.

The Town were a different side after the break; David O’Sullivan headed wide in the 51st minute and minutes later he squandered another chance.

In the 70th minute the home side finally went ahead when O’Sullivan picked out Gary Shaw and he made no mistake; his 6th goal in 6 games.

Town defender Jamie Mulhall then did very well to track back and dispossess Grant in the 75th minute and in the 80th minute Jack Doherty’s low strike just went inches wide.

Waterford were to rue those missed opportunities because seven minutes from time David O’Sullivan got the Town’s third goal. Mark Salmon and substitute Peter Hynes combined well for O’Sullivan to claim his 17th league goal of the season.