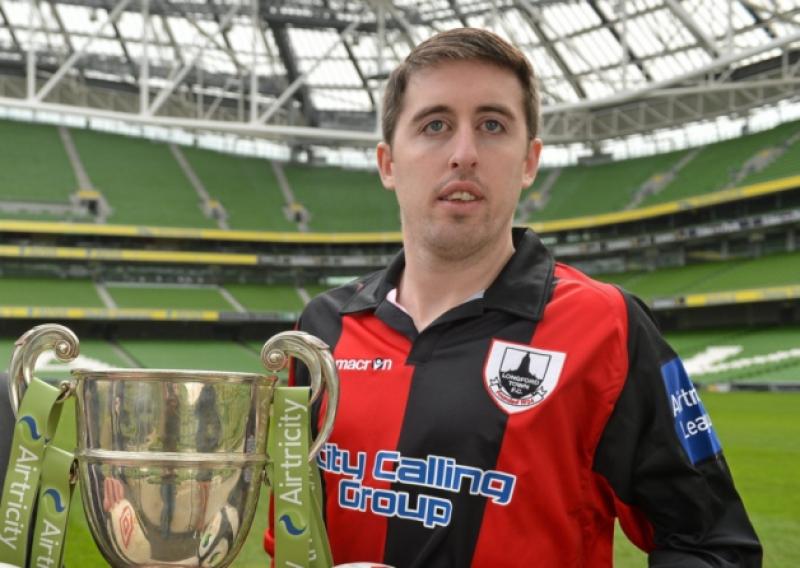 For a footballer to play in any cup final is a fantastic opportunity. To have the game in your home ground really adds to the occasion.

For a footballer to play in any cup final is a fantastic opportunity. To have the game in your home ground really adds to the occasion.

Next Tuesday night Longford Town take on St. Patrick’s Athletic in the Leinster Senior Cup Final at City Calling Stadium (kick-off 7.45pm) and captain Mark Salmon is delighted the game is at home.

“It’s great to get the game at City Calling Stadium. The Leinster Senior Cup hasn’t been given a lot of recognition but it’s great to get to a final; a chance to win a medal and a trophy. Being at home could be an advantage for us,” he told the Leader.

It may not be near as attractive as the FAI Cup or the EA Sports Cup but for Salmon it’s a cup final and an opportunity for the club to win some silverware. “It’s very hard to get to finals. There are lads that have been around the league for quite some time and have not got the opportunity to play in cup finals. Any cup, doesn’t matter if it’s the Leinster Senior or the FAI Cup, it’s great to get to the final. It’s a great occasion for fans and players and hopefully we can win it.”

Last season a strong St. Pat’s side defeated the Town after extra-time in this competition and Salmon has no doubt that they will put out another strong starting eleven on Tuesday night.

“Pat’s can field probably two very strong 11s. Whatever team they put out on the night will be strong. It will give their manager Liam Buckley the chance to feature players who don’t play every week. You look at their bench in the Premier Division, it’s full of quality. so they are going to be hard beaten.”

The Leinster Senior Cup final comes during the league title run-in for the Town. Although it would be great to win a cup, Salmon admitted the main goal for the Town is promotion.

“Coming to the end of the season it will be tough playing a midweek game and particularly so with a cup at stake. Our main objective is getting promoted this season. Though with the free weekend straight after (FAI Cup quarter-finals) we can rest and go again in the league the following week.”

For Mark Salmon this will be his first cup final at senior level and one he is looking forward to and as captain he would like to lead Longford Town to cup success. “Lifting the Leinster Cup would be great. It breeds confidence into the team and also a winning mentality. It would be nice to get the win.”

The Town captain is hoping that come October he will have another chance to collect a cup; the First Division title.

“We have to make sure that we keep ourselves right for the last few games and push ourselves right to the end. There is a big prize at stake and that’s what keeps you going. We have a lot of experience in the team while the younger lads in the squad will have learned a lot from the pressure of the play-offs last season. We are completely focused on all the big games ahead and hopefully we will be successful.”