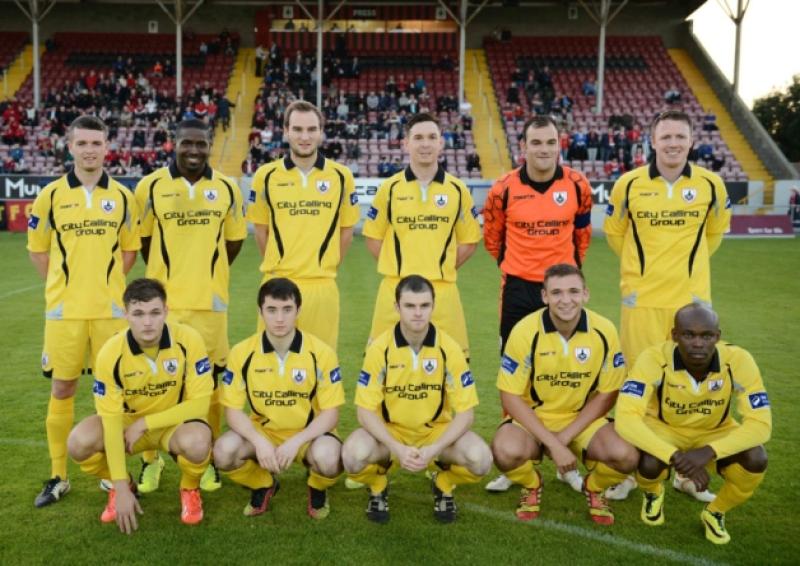 Goals from Sam Verdon and Jack Bayly won the Leinster Senior Cup for St. Patrick’s Athletic as they got the better of Longford Town in the final of this low key competition at City Calling Stadium on Tuesday night week last, watched by an attendance in the region of 500.

Goals from Sam Verdon and Jack Bayly won the Leinster Senior Cup for St. Patrick’s Athletic as they got the better of Longford Town in the final of this low key competition at City Calling Stadium on Tuesday night week last, watched by an attendance in the region of 500.

Both sides used this game to give fringe players a run but it was a missed opportunity for Longford to capture some silverware. With four vital league games ahead of them, Town manager Tony Cousins rested some first team players with strikers Gary Shaw and David O’Sullivan both carrying injuries and not being risked.

Of the new faces that featured for the Town, Tom Morris impressed in the centre of the defence and scored the equalising goal in the second half after he capitalised on a rare mistake by St. Pat’s reserve keeper Patrick Jennings.

The first half was a fairly tame affair and at times it seemed like a pre-season friendly. The first chance of the game fell to St. Pat’s in the 23rd minute when Tom Morris deflected Jamie McGrath’s shot out for a corner.

In the 34th minute St. Pat’s broke the deadlock when Mark Quigley’s through ball was finished to the net in emphatic fashion by Sam Verdon and five minutes later Town keeper Chris Bennion denied Verdon a second goal.

The game improved considerably in the second half and it was pretty open with both sides having chances. In the 56th minute Town player Conor O’Brien brought a very good save out of Jennings but the Pat’s netminder messed up Rhy Gorman’s cross moments later as Tom Morris pounced on the breaking ball to find the back of the net from a few yards out.

St. Pat’s then had a chance to regain the lead but James Chambers sweet strike from outside the box hit the post in what was a lucky escape for Longford. But in the 64th minute the visitors were back in front when Jamie McGrath set up substitute Jack Bayly and he scored from a tight angle for what proved to be the matchwinning goal.

Minutes later, a strike from Town substitute Mark Salmon was deflected out for a corner before Rhys Gorman’s low drive from long range just went wide.

With Longford pressing for the equaliser, St. Pat’s tried to catch them on the break and Athletic had a chance in the 78th minute only for Peter Durrad to shoot wide. One minute later, Jennings made a fine save from Don Cowan who went close for the home side after he latched on to a good cross from Jamie Mulhall.

As the game entered the exciting final few minutes, the Town continued to pile on the pressure in a determined bid to salvage the situation but it was not to be with Jennings the St. Pat’s saviour as he produced an excellent stop to deny substitute Lorcan Shannon.