Longford Town take Shels to go top of the table 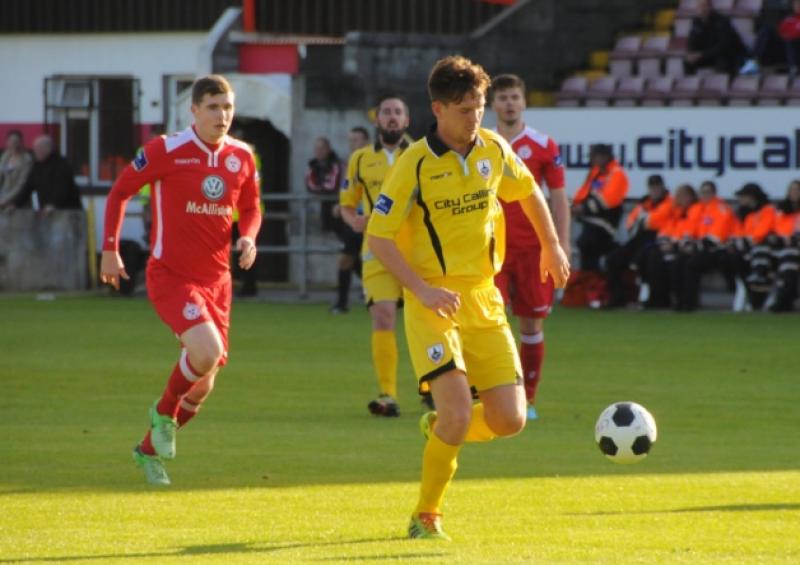 Longford Town moved to the top of the First Division league table for the first time this season with a terrific win over the previous leaders Shelbourne at City Calling Stadium on Saturday evening last.

Longford Town moved to the top of the First Division league table for the first time this season with a terrific win over the previous leaders Shelbourne at City Calling Stadium on Saturday evening last.

It was a most important triumph for the Town who could have won by more such was their dominance throughout the game. David O’Sullivan was on the mark twice while his strike partner Gary Shaw grabbed his second goal in two games.

O’Sullivan’s brace now sees him move to within one goal of the legendary Richie Parsons as Longford Town’s leading goalscorer in the League of Ireland and that record is about to be broken.

The Town started brightly and carved out two good chances inside the opening minutes. Less than a minute had gone when O’Sullivan played Stephen Rice through but his shot was excellently saved by Shels keeper Greg Murray.

Seconds later a Glen O’Connor corner was headed against the crossbar by O’Sullivan and the rebound fell to defender Pat Flynn who failed to find the target.

The crossbar was to deny Longford again in the 23rd minute when Mark Salmon’s excellent strike from about 25 yards out came off the bar with Shels netminder Murray beaten.

Murray then denied Shaw one minute later with a good save. The game was then held up for seven minutes after a clash of heads between two Shels players. The unfortunate Adam O’Connor was stretchered off but thankfully his injury wasn’t too serious.

When the game resumed the Town created more chances; Shaw connected with a header from a Salmon free-kick before Kevin O’Connor miskicked his effort in the 39th minute.

The second half was like the first with the home side dominating the exchanges. Gary Shaw charged down a clearance by Murray but the ball just bounced inches wide of the far post. Kevin O’Connor then had another good chance but his weak attempt was saved by Murray.

Longford were reduced to 10 men in the 62nd minute when Glen O’Connor was harshly sent off after clearing winning the ball. Shels player Dylan Connolly made the most of the tackle and O’Connor was shown a straight red card.

One minute later Shels were also down to 10 men after Willo McDonagh was sent off for an off the ball incident. The deadlock was eventually broken in the 64th minute when the Town deservedly took the lead; Shaw’s flicked the ball on to O’Sullivan who got past the Shels keeper to finish to the net

Shaw made it 2-0 in the 78th minute when he headed home Kevin O’Connor’s cross and two minutes later Rice set-up O’Sullivan for his 12th league goal of the season as the Town moved into pole position in the race for the league title.