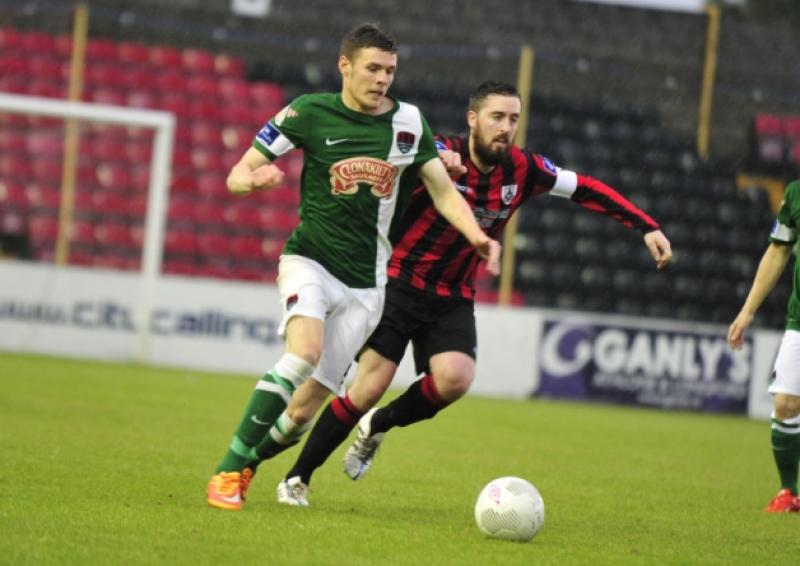 Longford Town fell to their second defeat in a row as Cork City exposed the midlanders defensive problems to collect all three points and keep the pressure on Dundalk at the top of the Premier Division League table.

Longford Town fell to their second defeat in a row as Cork City exposed the midlanders defensive problems to collect all three points and keep the pressure on Dundalk at the top of the Premier Division League table.

Due to the goals conceded the Town drop down to seventh in the table behind Galway. Overall they deserved nothing out of the game at City Calling Stadium on Saturday evening last as they put in a poor performance against a good Cork City side.

It was Town’s heaviest defeat of the season and a long way off the display they produced against Bohemians at the beginning of the month.

One positive to come out of the game was Dean Kelly’s goal right at the end; his second goal in two games since his move from Bohs. Kelly knows where the goal is but he wasn’t given much supply on Saturday.

Gary Shaw had to go out to win the ball and the delivery into the box should have been for him, not by him.

Longford were missing a number of players for this game and their absence was sorely felt but apart from Stephen Rice the others will be out for a number of weeks. Thw Town cannot do without key players.

The next two games against Drogheda United (home) and Derry City (away) have been described by Town manager Tony Cousins as cup finals and they know they will have to improve on recent performances if they are to get anything out of those games.

Played in wet and miserable conditions the first real chance of the game didn’t come until the 15th minute; Jack Doherty’s corner met the head of Willie Tyrrell at the far post but he directed his effort wide.

Three minutes later Longford were caught out defensively when Karl Sheppard’s header found the back of the net, albeit with a little help from Town defender Tyrrell.

Sheppard had a chance to get another goal in the 31st minute but his effort went over the bar. Just before the break the Town had a chance to pull a goal back but Cork City keeper Mark McNulty brought off an excellent save to deny Mark Salmon.

The visitors should have scored a third goal in the 50th minute but Gavan Holohan was denied by Town netminder Paul Skinner who made a fine save.

Gary Shaw then had a chance for the home side before Sheppard had a glaring miss for Cork; the former Shamrock Rovers player raced through on goal but shot wide when it was easier to score.

But in the 68th minute Cork got their third goal when Mark O’Sullivan got onto the end of Gary Buckley’s ball and he made no mistake in finding the back of the net.

The Town made changes but it was too late for them to do anything about the result. Four minutes from time Sheppard got Cork City’s fourth goal.

In stoppage time Longford grabbed a consolation goal when Dean Kelly fired the ball past Cork keeper McNulty from about 25 yards out.