Longford Town go down to Dundalk 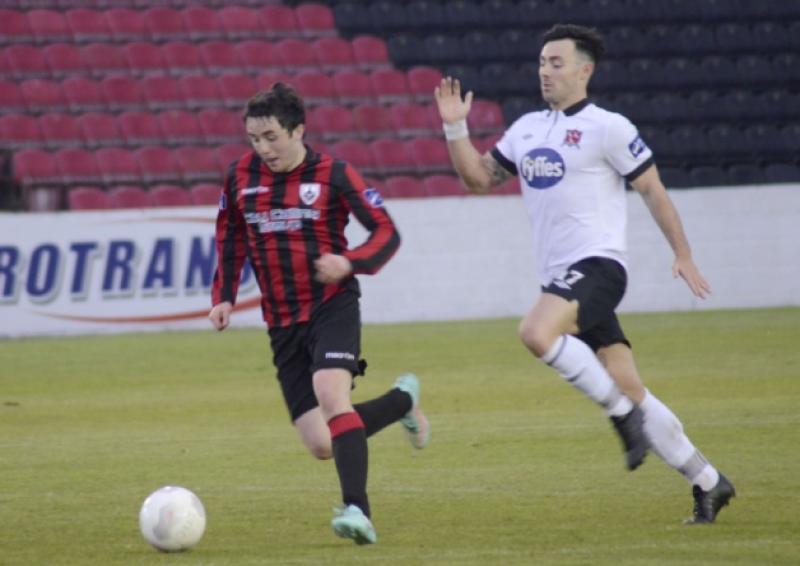 Stern resistance from Longford Town was eventually broken down by Dundalk as the reigning champions collected all three points to consolidate their strong position at the top of the Premier Division table.

Stern resistance from Longford Town was eventually broken down by Dundalk as the reigning champions collected all three points to consolidate their strong position at the top of the Premier Division table.

On the evidence of what was witnessed in front of the estimated 1,500 attendance at City Calling Stadium on Saturday night last, Stephen Kenny’s side are in unstoppable form in their fierce desire to win back-to-back league titles and who would bet against them such is their sheer quality allied to immense workrate.

Having said that, Town manager Tony Cousins devised a defensive game plan that was proving to be effective until dominant Dundalk eventually scored in the 58th minute.

The always dangerous Daryl Horgan found the time and space to direct a terrific strike from the edge of the box into the roof of the net over the head of the Longford keeper Paul Skinner who had advanced off his line.

While that was a severe setback for the home side, the opportunity to equalise soon after fell to David O’Sullivan but his shot was cleared off the line by Richie Towell - much to the relief of the Dundalk supporters situated at that end of the ground.

A couple of minutes later Gary Shaw had a close range effort blocked by Brian Gartland before Dundalk gradually got back on top and Darren Meenan had the chance to put the issue beyond all doubt in the 77th minute but was denied by opposing keeper Skinner who produced a fine save.

Moments later, there was another lucky escape for Longford Town when Dundalk striker David McMillan had a shot saved by Skinner who parried the ball against the post before collecting the rebound.

But the midlanders almost got back on level terms in the 82nd minute when a glancing header from Gary Shaw just drifted wide of the target and the same player had another opportunity in the 89th minute but he shot straight at the Dundalk netminder Gary Rogers.

But the killer blow was then struck as the Co Louth outfit launched an immediate attack with Daryl Horgan cutting in from the left wing before releasing the ball to Stephen O’Donnell whose clever flick into the path of John Mountney saw him score a cracking second goal from about 20 yards out.

Game, set and match to Dundalk and a clear indication of the great overall strength in their squad as both O’Donnell and Mountney were substitutes who were brought on late in the game.

But even at that the determined Town side never gave up the fight and almost scored a consolation goal deep into stoppage time. Despite the defeat by Dundalk, in the aftermath of the away win against Drogheda and the home draw against Derry, Longford are competing well in the top flight and certainly look good enough to stay clear of relegation trouble.

Next up is another tough task against Shamrock Rovers at Tallaght Stadium this Friday night but it is the following three fixtures - Limerick (home), Bray Wanderers (away) and Galway United (home) - that are really crucial for the Town in the quest to consolidate their Premier Division status,

Reflecting back to the clash against the league leaders on Saturday night last, the Town (minus the suspended Conor Powell) managed to make a bright start with Kevin O’Connor going close with a fine strike in the 2nd minute that was well saved by the so competent opposing keeper Gary Rogers - a vital cog in the powerful Dundalk machine.

After that it was the visitors who dominated the exchanges and in quick succession the alert Longford keeper Paul Skinner produced fine saves to keep out goalbound efforts from David McMillan and Daryl Horgan in the 15th and 16th minutes.

Richie Towell was then narrowly off target with a long range strike before Daryl Horgan shot over the bar in his attempt to catch out Skinner who had drifted off his line.

A snap shot from Towell then went wide before Horgan broke through on the left flank with his subsequent goal attempt deflected out for a corner in the 38th minute.

A poor header by McMillan was then comfortably gathered by Skinner as the game remained scoreless at the break and the Town had a chance with a minute gone in the second half, only for David O’Sullivan to shoot wildly wide.

Then came the turning point as Daryl Horgan struck to score the opening goal in the 58th minute and Dundalk done enough thereafter to claim another vital victory in their relentless title charge.