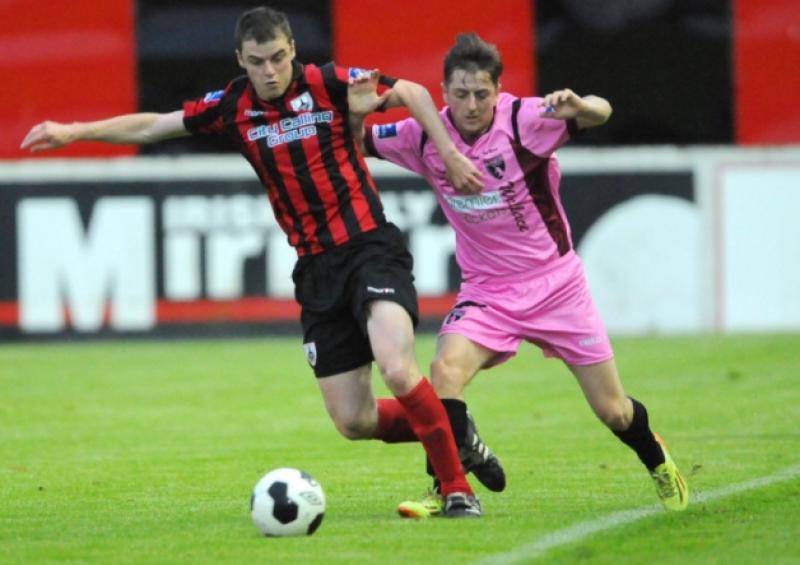 Longford Town extended their unbeaten run to 12 games when they eventually got the better of a poor Shamrock Rovers B side in the First Division league clash at Tallaght Stadium on Friday night last.

Longford Town extended their unbeaten run to 12 games when they eventually got the better of a poor Shamrock Rovers B side in the First Division league clash at Tallaght Stadium on Friday night last.

The Town dominated the game from start to finish and the winning margin could have been even wider as Rovers offered nothing and had not one scoring chance of note. The latest victory maintains Longford’s six point lead over Shelbourne at the top of the table and it was their first success at Tallaght Stadium.

Once Mark Salmon broke the deadlock after the hour mark it was a case of how many goals the Town would score with chief marksman David O’Sullivan on target twice to clinch the victory.

O’Sullivan had the first effort on goal as early as the second minute but he headed over from a Salmon free-kick. Minutes later Don Cowan had an effort that went wide as the Town took a stranglehold on the game.

In the 17th minute Cowan found O’Sullivan and his chance was deflected out for a corner. On the half hour mark Kevin O’Connor played in a perfect ball but Gary Shaw’s diving header just went wide in what was the visitors first real effort on target.

Pat Sullivan floated a ball in minutes later but O’Sullivan failed to find the target with a header. The Town were on top but failing to put away any of their chances.

Three minutes into the second half O’Sullivan took the wrong option and instead of taking a shot himself he decided to pass to Shaw but it was a poor ball to his strike partner. O’Sullivan then came close in the 55th minute from an O’Connor cross.

In the 61st minute the deadlock was finally broken. O’Sullivan. while on the ground, was able to pass to Shaw who in turn laid the ball off to Salmon who found the back of the net from just inside the box.

The goal came as a great relief to the Town and their large number of supporters after Rovers had frustrated the league leaders up until then. In the 68th minute substitute Peter Hynes played the ball into O’Sullivan but the striker shot straight at Rovers keeper Conor O’Malley.

O’Sullivan finally found the back of the net in the 76th minute when Cowan made a great run down the wing and passed to O’Sullivan, who did well to control the ball before firing home.

O’Sullivan had another chance in the 84th minute after getting on to the end of a ball over the top but his shot was off target.

As the clock ticked down the Town continued to press and create scoring opportunities and in stoppage time they got their third goal. Full-back Jamie Mulhall made a great run and after cutting inside he decided to pass to O’Sullivan instead of taking the shot himself. O’Sullivan made no mistake to register his 19th league goal of the season.

With eight league games to go, Longford Town remain on course to win the title and automatic promotion to the Premier Division. Next up are Finn Harps on Saturday next, followed by Galway FC the following week, and both games are at City Calling Stadium.