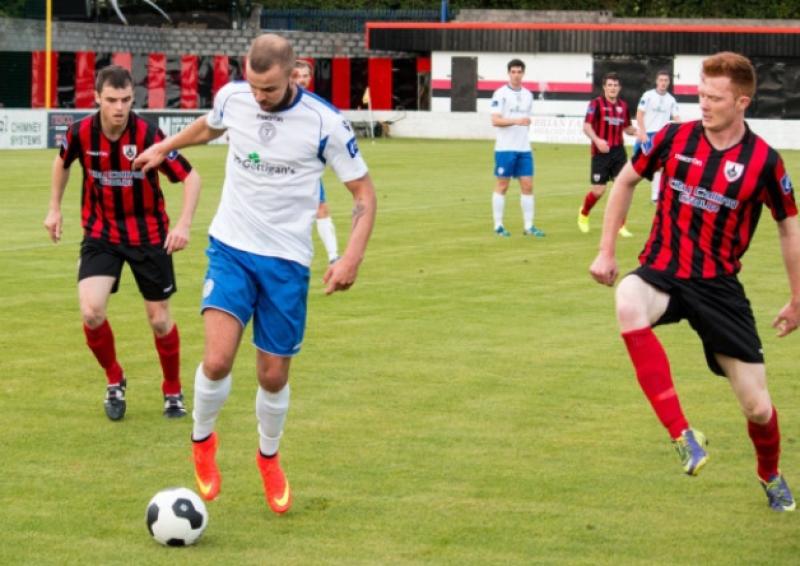 Longford Town were held to a frustrating scoreless draw by a negative Finn Harps side at City Calling Stadium on Saturday evening last as their lead at the top of the First Division table was cut to four points.

Longford Town were held to a frustrating scoreless draw by a negative Finn Harps side at City Calling Stadium on Saturday evening last as their lead at the top of the First Division table was cut to four points.

The Town had plenty of chances throughout the game but brought just one save out of Harps keeper Conor Winn; that came in the 92nd minute when Kevin O’Connor was denied a dramatic last gasp winner.

This result stretches Longford’s unbeaten run to 13 games with two massive league fixtures ahead of them in the next few weeks; at home to Galway FC on Saturday next and away to Shelbourne on Friday August 29th.

The Town started well against Harps and a pinpoint cross from Don Cowan was headed wide at the near post by David O’Sullivan in the 4th minute.

O’Sullivan weaved his way through the Harps defence minutes later but he couldn’t get a shot on target. Town keeper Paul Hunt was called into action in the 16th minute, tipping a free-kick over the bar. And then Packie Mailey headed over for the visitors one minute later.

It was a poor encounter but in an eight minute spell at the beginning of the second half it came to life; Sean McCarron tested Town netminder Hunt in the 53rd minute and then four minutes later Michael Funston nearly broke the deadlock but his shot was cleared off the line.

Longford also had their chances; in the 59th minute O’Sullivan came close after Winn raced out of his goals but the striker’s lob bounced just inches wide before Gary Shaw hit his shot straight at the Harps netminder when he really should have done better.

In the 65th minute Kevin O’Connor’s shot hit the post and went out for a goal-kick and then Don Cowan’s shot 10 minutes later was well blocked down by Tommy McGonagle as the home side started to apply pressure.

The Town continued to press for a goal and in the 83rd minute Lorcan Shannon shot wide. The ball was in the Harps half for the majority of the final few minutes but Longford just couldn’t find a breakthrough with Harps defending resolutely.

Two minutes into stoppage time O’Connor hit a shot from distance but his strike was saved by Winn as the Donegal side held out for a draw.