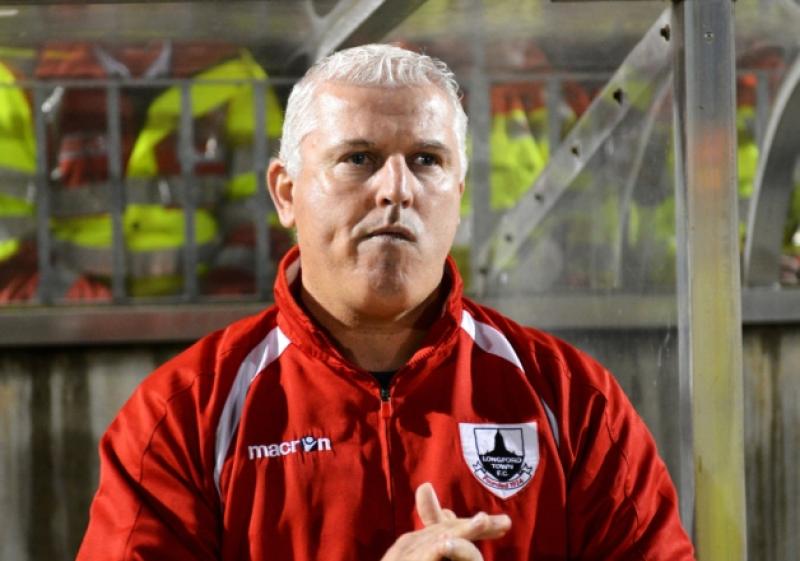 After watching his side beat Athlone Town on Saturday night to secure a promotion play-off place, Longford Town manager Tony Cousins wants his players to repeat that performance away to Mervue United in Galway this Friday night.

Speaking to the Leader he said: “We have to bring this performance into the play-offs. It’s going to be difficult because Mervue are on a great run. We have got to be really at our best. The young lads that have come in have really stood up to the plate. They have been the difference.”

The Town boss was delighted with his side’s 2nd place finish and that the 2nd leg of the play-offs is at home. He said: “You saw how crucial that was last year. We have to make sure we get a result in Mervue but it’s going to be a tough task. As a manager and player you want to be involved in these games. Roll on Friday night.”

With three teams in contention for the two play-off positions, the Town knew what they had to do on Saturday night; win and not depend on other clubs. “To a man they did their job tonight,” said Cousins. “The credit has to go to the players. That’s just one stage of the promotion process but tonight will stand to them. The pressure they were under was unreal.”

It has been a strange season for the Town; leading the table by 9 points in June and they then saw their great rivals Athlone lift the First Division title on Saturday. Cousins bemoaned a series of problems that has dogged his side’s season: “I think the negativity that has surrounded the team has been unbelievable. They have had a lot to deal with during the course of the season going back to the Colly James incident. That was a thing that went on for months, behind the scenes. As a manager you have deal with that but it wasn’t easy and we have had so many injuries too.”

On Saturday night the loyal Longford Town supporters were in full voice as they proved to be the 12th man. Dubliner Cousins paid tribute to the supporters who have stood behind the players this season: “I’m delighted for the supporters. I know it’s hard when you see Athlone winning the league but we finished 2nd. We have given our supporters something to shout about and they will be right behind us now in the play-offs.”

The 2nd leg of the First Division promotion play-off against Mervue United is scheduled for City Calling Stadium on Friday Oct 25th.