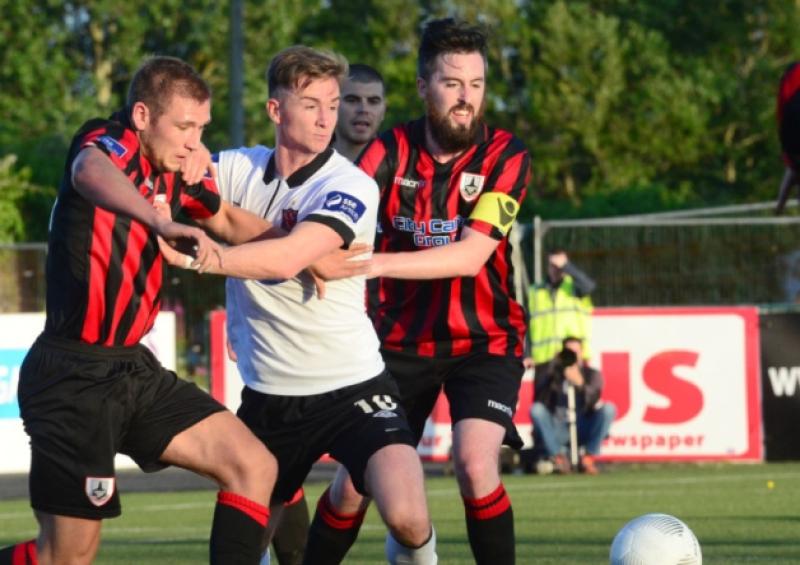 10-men Longford Town battled for over 50 minutes to hold the Premier League champions Dundalk to a scoreless draw in Oriel Park on Friday night last.

10-men Longford Town battled for over 50 minutes to hold the Premier League champions Dundalk to a scoreless draw in Oriel Park on Friday night last.

Goalkeeper Paul Hunt was very much the Town hero, pulling off a string of excellent saves to deny Dundalk and help his side earn a valuable point.

What a difference a week makes; seven days earlier the Town were poor as they lost 3-0 away to Derry City but against Dundalk they put in a fantastic defensive display.

Longford lost captain Mark Salmon in the 42nd minute when he was harshly sent-off by referee Tom Connolly. The unfortunate Salmon collided with Dundalk striker David McMillan and the match official was quick to flash a red card deeming that the Town player prevented a goalscoring opportunity for the home side.

Now down to ten men, it looked like the Town would struggle but in fact they showed great character and resilience to achieve a tremendous result in holding the league leaders scoreless despite several attacks by Stephen Kenny’s side.

Dundalk had the first effort on goal in the 9th minute; Andy Boyle played the ball into Sean Gannon who in turn fired over a cross but it was too high for Daryl Horgan to connect with.

They had another good chance in the 18th minute when Horgan found David McMillan but his shot failed to find the target.

After a slow start the Town gradually began to get into the game and in the 36th minute they created their first real chance; Gary Shaw got on the end of Pat Sullivan’s corner but Dundak keeper Gary Rogers pulled off a good save to keep his net intact.

In the 42nd minute disaster struck for the Town when they lost Mark Salmon to a dubious red card, leaving the midlanders facing a real uphill battle in the second half.

It was no surprise that the Town were set up defensively for the remainder of the match and manager Tony Cousins deserves a lot of credit for the effective tactics he implemented. Longford continually frustrated Dundalk and their boss Stephen Kenny was forced to make changes in a bid to break the deadlock.

Just after he was introduced, latest signing Sean Maguire had a chance after another Dundalk newcomer Ciaran Kilduff knocked the ball down for him but Town defender Rhys Gorman got in a fantastic clearance when a goal looked on.

As the clock ticked down Dundalk were in a state of panic in their frantic efforts to snatch a win. In the 83rd minute Maguire had another chance but Hunt pulled off a fantastic save.

The Town keeper was called into action again minutes later, this time saving Brian Gartland’s header after he connected with Horgan’s corner.

Right at the end, Hunt came to the rescue again when he produced an excellent save to push Ronan Finn’s effort around the post and the loyal Longford supporters went home every happy indeed with the draw against Dundalk.