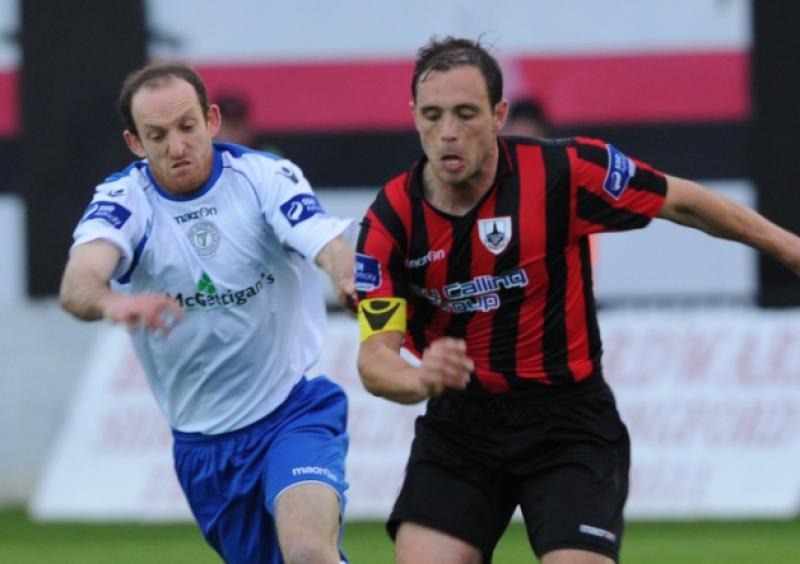 A first half penalty converted by David O’Sullivan was the decisive only goal of the game as Longford Town recorded their first home win of the season in getting the better of Finn Harps at City Calling Stadium on Saturday night last.

A first half penalty converted by David O’Sullivan was the decisive only goal of the game as Longford Town recorded their first home win of the season in getting the better of Finn Harps at City Calling Stadium on Saturday night last.

It was O’Sullivan’s first goal against Harps – having failed to find the net in the four games against the Co Donegal club last season. It was the first goal that the Town have scored at home this season but good enough to shoot them up the First Division league table and into second spot.

It was a less than convincing performance from Longford and Harps will count themselves unlucky that they didn’t get anything out of the game; their problem was they lacked a real cutting edge up front.

After last weekend’s shattering setback against Shamrock Rovers ‘B’ this was a big game for the Town on home ground. Manager Tony Cousins shrugged off the suggestion that him and his side were under pressure at this early stage of the season: “I think it was a funny week going into it. People are trying to put us under pressure after five games. You were going into a game tonight to go second, you’re in the 2nd Round of the League Cup and in with a chance of getting to the quarter-finals. The only thing is now you know early doors, who’s with you and who’s not. It’s going to galvanise our dressing room.”

Cousins admitted that it was vital for his side to bounce back after the disappointing defeat to Rovers ‘B’ the previous week. “There was no one more frustrated than me. Last week was just humiliating and embarrassing. At the end of the day you have got to look at the overall thing and to see how the team bounces back. The way it is, if we were struggling and it was in the second phase of games, then it would be a big thing. We sit now seven points behind Shels with a game in hand and we have to play them three more times. Personally I didn’t panic, I didn’t read any websites.”

The attendance of about 400 didn’t get much value for money on Saturday night and the respective keepers Chris Bennion and Conor Winn did not have to make a real save of note throughout this dour affair.

Ciaran Coll created the first chance of the game in the 8th minute but his well struck effort got a deflection out for a corner which came to nothing. Longford’s first attempt on goal came in the 17th minute with full-back Noel Haverty hitting a well struck shot that went narrowly over the bar.

But the deadlock was broken in the 25th minute when referee Kevin O’Regan penalised Packie Mailey for a handball and the Town were awarded a penalty. David O’Sullivan stepped up and his shot squeezed under the body of Winn who was unlucky not to save the spot kick.

Longford looked edgy after getting the crucial goal and a mix-up between defender Chris Deans and keeper Bennion with a misdirected back pass very nearly yielded an equaliser for Harps but fortunately for both the ball went out for a corner.

Three minutes before the break Bennion was forced into tipping Michael Funston’s free-kick over the bar. Finn Harps started the second half brightly and applied some pressure but it came to nothing. Pat McCann tried his luck from distance in the 59th minute but failed to find the target.

The Town looked lethargic and didn’t look like scoring another goal. Both Gary Shaw and Don Cowan were on the bench but neither were called upon despite the struggle for Longford up front. Shaw was eventually introduced 15 minutes from time while Cowan was an unused substitute.

In the 82nd minute Rhys Gorman had a chance with a free-kick from about 30 yards out but it went wide of the far post. Harps began to press again for an equaliser with the Town defence, and in particular Noel Haverty, clearing the danger.

Deep into stoppage time Michael Funston floated a Harps free-kick into the box but Bennion was able to gather the ball and the Town held on for the slender win.

Tony Cousins was delighted with another clean sheet for his side: “That’s five clean sheets in six league games which is really good for us. The most important thing now is to concentrate on the next fixture against Galway. We will certainly not be getting carried away with the win over Harps but it was very important to collect all three points.”