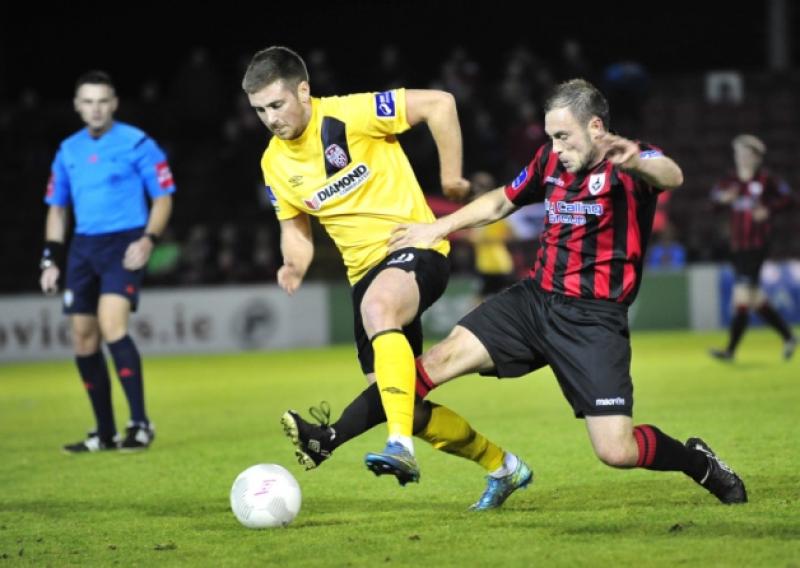 After scoring excellent away wins over Drogheda United (0-3) and Cork City (2-3) in their previous two games, positive Longford Town clocked up another four goals in the defeat of Derry City in the final fixture of the season on Friday night last.

After scoring excellent away wins over Drogheda United (0-3) and Cork City (2-3) in their previous two games, positive Longford Town clocked up another four goals in the defeat of Derry City in the final fixture of the season on Friday night last.

In front of the official 601 attendance at City Calling Stadium, the only thing at stake was a sixth place finish in the Premier Division with both sides having secured their top flight status for 2016.

And it was the much keener Town team who emerged victorious to consolidate their place in the top half of the table which was a great achievement for the club in building on the success of winning the First Division title last season.

Credit to manager Tony Cousins who got the job done in the end and he confirmed after the game last weekend that he will be remaining in charge next season with another year left on his contract.

It was a fantastic finish to the league campaign with those consecutive wins over Cork. Drogheda and Derry and collecting the maximum total of nine points in the process.

Longford were actually leading 4-0 in the closing stages of the game on Friday night last in brushing aside the weak challenge of a lethargic Derry City side but conceded a couple of late goals.

The Town dominated the first half and had several chances to break the deadlock but reserve Derry keeper Shaun Patton thwarted them on a number of occasions. He tipped a cross from Ayman Ben Mohamed on to the crossbar in the 14th minute and then two minutes later he saved a Stephen Rice header.

The next chance for Longford came in the 37th minute but Kevin O’Connor was denied by the diving Patton. Then in first half stoppage time the home side were awarded a penalty after Derry player Rob Cornwall handled the ball in the box and David O’Sullivan made no mistake from the spot-kick.

In the 56th minute the Town doubled their advantage when a wayward Derry clearance fell to Mark Rossiter and the Longford defender unleashed an unstoppable strike from about 40 yards out that flew past Derry netminder Patton.

It got even better for the Town when a Gary Shaw header yielded the third goal in the 63rd minute and Shaw was the provider for the fourth goal five minutes later when he was fouled in the box by Patton and a second penalty was awarded. Defender Pat Sullivan converted the penalty in his last game for the club as he has announced his retirement from League of Ireland football.

With things so easy for the Town, manager Tony Cousins decided to introduce Dean Kelly and Kaleem Simon for Shaw and O’Sullivan and soon after he brought on Mark Salmon for the excellent O’Connor.

Having little to do for most of the game, Longford keeper Paul Hunt was picking the ball out of the net in the 77th minute when Ronan Curtis was on target for Derry and the visitors got a second consolation goal in the 90th minute through Rob Cornwall.