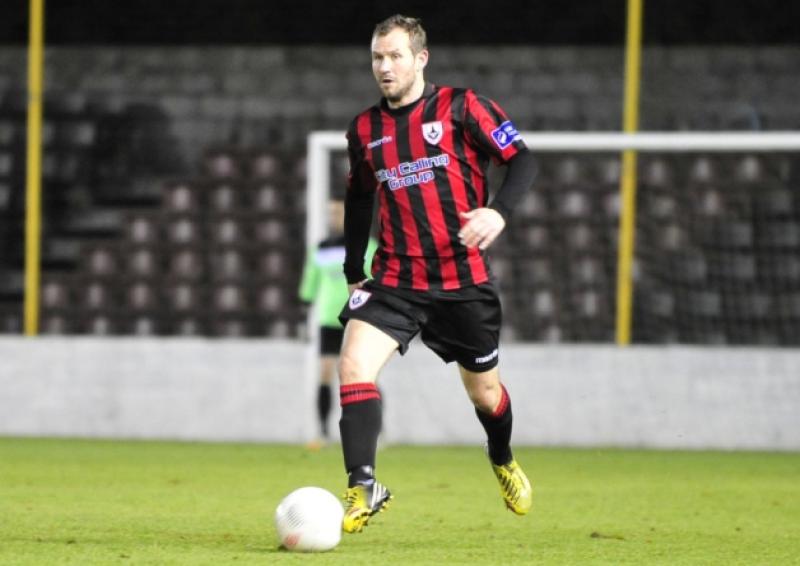 Longford Town are almost safe in the battle to consolidate their Premier Division status after a wonderful win away to FAI Cup finalists Cork City on Friday night last, much to the sheer delight of manager Tony Cousins.

Longford Town are almost safe in the battle to consolidate their Premier Division status after a wonderful win away to FAI Cup finalists Cork City on Friday night last, much to the sheer delight of manager Tony Cousins.

Kevin O’Connor scored the winning goal six minutes from time at Turners Cross to earn the Town all three priceless points and they will be in a confident frame of mind for the remaining fixtures against Drogheda United (away on Friday night) and Derry City (home on October 30th).

A draw against Drogheda will guarantee top flight football next season. It was a fine performance from the Town after they fell behind in the 34th minute. But the course of the game changed before the break as goals from David O’Sullivan and Stephen Rice put the visitors ahead.

After the disappointment of letting victory slip from their grasp against Sligo Rovers the previous week, the Town were well aware that they needed a result against Cork in order to boost their survival chances.

Tony Cousins went with an attacking side with David O’Sullivan recalled, as was Mark Rossiter who took his place in the centre of the defence. Supporters had wanted a change to Longford’s regular conserative style of play and they certainly got that in Turners Cross. Cork started brightly and in the 4th minute a Billy Dennehy effort came back off the post. In the 13th minute David O’Sullivan hit a shot straight at opposing keeper Mark McNulty and eight minutes later he was denied by a block by City defender Kevin O’Connor.

The home side then created chances with Mark O’Sullivan heading over before Dennehy wasted a good opportunity shortly after. Karl Sheppard blasted his effort across the face of the goalmouth on the half hour mark and then four minutes later they took the lead. Liam Miller found Sheppard with a perfect pass and he rounded Town keeper Paul Skinner before firing the ball into the back of the net.

Steven Beattie and Billy Dennehy had chances to extend the Cork advantage but both were wasted. Then in the 39th minute the Town drew level; Dean Kelly found David O’Sullivan and he went through one-on-one with McNulty before firing an excellent shot past the City keeper.

On the stroke of half-time the Town scored a second goal when substitute Stephen Rice and Cork opponent John Dunleavy battled for the ball with substitute Rice (only on the pitch a few minutes) getting the vital touch to put his side in front.

Cork went close to getting the equaliser in the 48th minute when Kevin O’Connor forced a fine fingertip save from Paul Skinner before a long range effort from Longford’s Kevin O’Connor was just off target.

Gary Shaw had a decent opportunity for the Town in the 57th minute but his shot was cleared by Cork defender Dan Murray. In the 63rd minute City got back on level terms when a Danny Morrisey header was saved by Skinner but Steven Beattie fired home the breaking ball.

Morrissey was just wide in the 76th minute and he then had a header blocked by Town defender Rhys Gorman as Cork piled on the pressure in the search for a winner.

But it was Longford Town who got the all-important next goal in the 84th minute to clinch a remarkable victory against all the odds. David O’Sullivan broke down the wing before pulling the ball back into the path of Kevin O’Connor who found the back of the net to settle the issue.