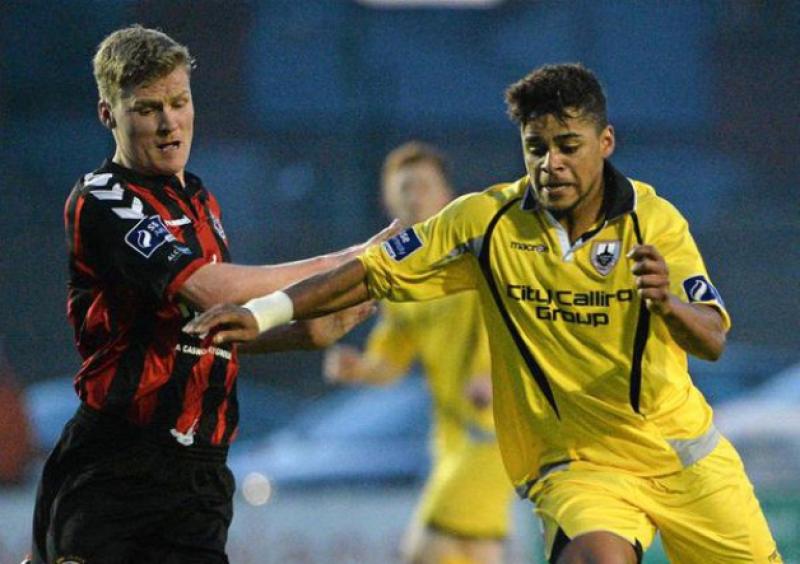 A goal from full-back Noel Haverty saw Longford Town come from behind to earn a point away to Bohemians on Friday night in Dalymount Park.

A goal from full-back Noel Haverty saw Longford Town come from behind to earn a point away to Bohemians on Friday night in Dalymount Park.

In a frantic eight minute spell Bohs lost Keith Buckley when he was sent off for a second yellow card, three minutes later they levelled matters through Paddy Kavanagh but right before half-time Town drew level when Haverty headed home.

This point could prove crucial as things at the bottom of the table remain very tight with just five games remaining in the league.

Next Saturday, Longford welcome the new EA Cup winners, St Patrick’s Athletic to the City Calling Stadium with a 7.30pm kick off.

The first effort of the tie came in the 11th minute but Dave Mulcahy’s header was just off target. Minutes later Town created their first chance; Kevin O’Connor with a fine strike that just failed to find the twine.

The best chance of the half fell to Town striker and ex Bohs player Dean Kelly but his free kick went just inches wide of Dean Delany’s post.

Another ex Bohs player had an opportunity in the 27th minute; after he picked up the ball he controlled it well but his volley just went over the bar.

It was all Town at this stage but they just couldn’t make the breakthrough. In the 34th minute Ismahil Akinade got onto the end of Lorcan Fitzgerald’s corner but Pat Sullivan did well to clear the ball of the line and force another corner.

Minutes later Bohs were dealt a blow when Buckley received a second yellow and was sent off for a foul on Sullivan.

In the 40th minute Bohs took the lead when Martin Deady slipped and Kavanagh was able to get in and unleash an excellent shot past Paul Hunt.

Town responded well and nearly levelled the game one minute later; Lorcan Shannon put in a terrific cross and it found Gary Shaw but his header lacked real power to trouble Delany.

Shannon was causing problems and his cross very nearly caught Delany out but the Bohs netminder put the ball out for a corner.

Town had the ball in the net for a second time in the 47th minute but Shannon’s effort was disallowed for offside; it was a tight call.

After being down one end of the field Haverty was called into action in his own area; deflecting Akinade’s header out for a corner.

Dean Kelly was unlucky not to score in the 55th minute when his shot came crashing off the post.

Compared to the opening half the second was a lot better with chances for both sides.

In the 61st minute Rice set-up Ben Mohamed but Dean Hayes did very well to get back and deny the winger.

Town substitute David O’Sullivan had a chance in the 78th minute when he stood over a free but he chipped it over the bar.

As the clock ticked down both sides went in search of a second goal that could get them the three points. Shaw had an opportunity in stoppage time but his shot lacked conviction and Delany gathered.