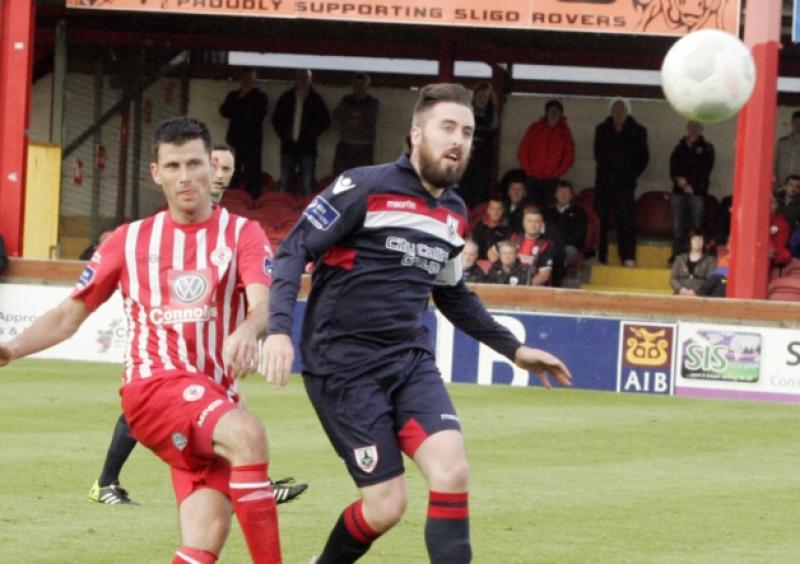 A spirited second half fightback was not enough as Longford Town came away from the Showgrounds empty handed on Saturday night as Sligo Rovers held on to take all three vital points.

A spirited second half fightback was not enough as Longford Town came away from the Showgrounds empty handed on Saturday night as Sligo Rovers held on to take all three vital points.

Trailing 3-0 at the break and looking dead and buried, the Town were a completely different side in the second half and really fought hard to get back into the game.

Mark Salmon converted a penalty and debutant Dean Kelly (signed from Bohemians) scored the second goal to close the gap but the visitors just could not get the equaliser that their performance deserved.

Despite this defeat, the Town still stay in 6th place in the Premier Division table but only on goal difference from Galway United. Longford have two home games coming up, starting with second placed Cork City on Saturday night next.

The Town had the first chance of the game inside the opening minutes but Kevin O’Connor’s shot went over the bar. Rovers then settled into the game and tried to carve out chances.

In the 21st minute they broke the deadlock when David Cawley finished Raff Cretaro’s cross to the back of the net. And the home side doubled their advantage two minutes later when Keith Ward directed the ball over Town keeper Paul Skinner.

Stunned by Sligo’s great start, the Town tried to get back into the game and in the 24th minute Mark Salmon had a chance but his shot just went over the crossbar.

In the 35th minute Sligo got their third goal; Gary Armstrong’s lovely pass found Dinny Corcoran who made no mistake in putting the ball past opposing keeper Skinner.

Armstrong then had a chance before Corcoran should have scored again in the 39th minute but his shot came off the post and out for a goal-kick. Longford introduced new signing Dean Kelly for the second half to try and change things up front and give them a different option. And he very nearly got on the scoresheet but his effort was wide of the post.

Keith Ward then tried to beat Skinner with a lob but the Town keeper got back on his line to push the ball away to safety.

Fortunate not to be even further behind, the Town were thrown a lifeline in the 62nd minute when they were awarded a penalty after Ward brought down Mark Salmon in the box. Salmon stepped up to take the spot kick and sent Sligo keeper Ryan Coulter the wrong way in pulling a goal back.

That gave Longford a big lift and they continued to create chances with efforts from Kevin O’Connor and Dean Kelly. In the 77th minute, the Town got their second goal when Cretaro took down substitute Aymen Ben Mohamed and Mark Salmon’s free-kick was headed to the net by Kelly in his first game for his new club.

Gary Shaw should have levelled matters in the 80th minute when the striker capitalised on a mix-up in the Sligo defence but he could only direct his header straight at keeper Coulter.

It was all Longford at this stage as the Sligo defence began to get quite nervy. In stoppage time, the Town almost grabbed a dramatic last gasp equaliser but Kevin O’Connor dragged his shot just wide.