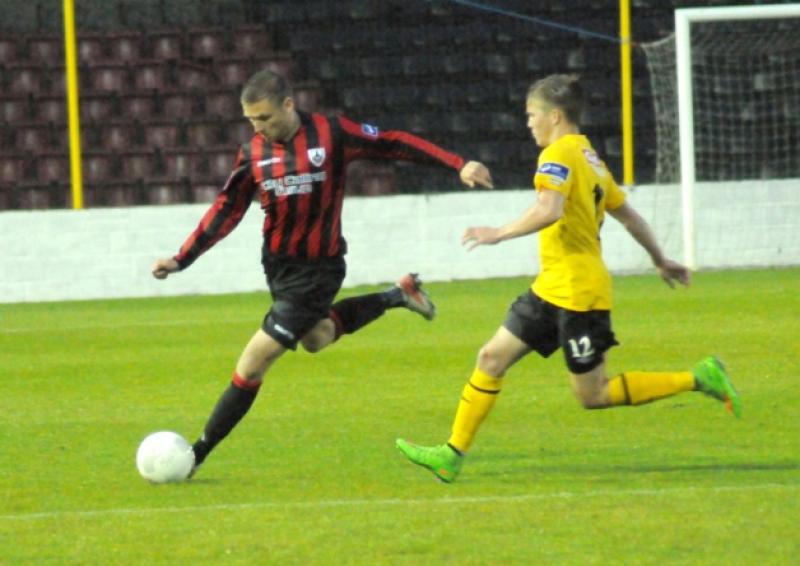 Ten men Longford Town stood firm and resolute in a brave battle as they held Derry City to a scoreless draw in the Premier Division league game at City Calling Stadium on Saturday night last.

Ten men Longford Town stood firm and resolute in a brave battle as they held Derry City to a scoreless draw in the Premier Division league game at City Calling Stadium on Saturday night last.

The Town had to play the majority of the game with 10 men after Conor Powell was sent off in the 20th minute in what appeared to be a harsh decision as referee Ben Connolly didn’t allow for the terrible wet conditions.

It was a backs to the wall job for Longford after the red card for Powell and while Derry piled on the pressure they couldn’t find a way past a resilient Town defence and keeper Paul Skinner who produced a number of fine saves to keep his net intact. It’s the second game in a row that the Town have kept a clean sheet and manager Tony Cousins will be pleased with that.

Skinner made his first save in the 8th minute to deny Cillian Morrison after Anthony Elding had set him up. The Town also created chances; Gary Shaw with a header while David O’Sullivan’s shot from a Ben Mohammed corner went just wide.

In the 20th minute Longford were reduced to 10 men when Powell was shown a straight red card for a tackle on Morrison, much to the fury of Tony Cousins and the home supporters. The manager thus decided to sacrifice striker O’Sullivan in order to bring on Martin Deady at left-back in place of Powell.

With numerical advantage Derry began to get on top but didn’t trouble Skinner. In the 29th minute the Town had calls for a penalty turned down when Stephen Rice was upended in the box but instead got a yellow card for dissent. Just before the break Skinner was called into action when he pulled off a fine save to deny Elding.

As the rain continued to pour down the visitors continued to carve out opportunities. In the 55th minute Skinner pulled off a terrific save to push Mark Timlin’s strike on to the crossbar and while the ball came back out to Anthony Elding he slipped and Longford were able to clear the danger.

Derry were completely on top and the Town were finding it hard to create any chances. Mark Salmon fired in a free-kick on the hour mark but Derry cleared.

In the 74th minute Longford felt that Derry’s Shane McEleney should have received a red card for a challenge on Gary Shaw and as the game entered the final 10 minutes puddles began to appear on the pitch due to the heavy rain. Thus it became very difficult for both sides to play the ball on the ground.

In the 80th minute against the run of play the Town had a great chance to test Derry keeper Ger Doherty. Racing through on goal Gary Shaw looked to be in but McEleney got back to put in a great tackle to knock the ball away from the Town striker.

Moments later Derry substitute Philip Lowry had a glorious chance to break the deadlock; Morrison crossed the ball into the box and it fell to Lowry who somehow blasted his effort wide with the goal at his mercy.

As the clock ticked down Derry continued to launch balls into the Town box in the hope they could finally get that elusive goal. But they were guilty of poor shooting while the Town defence were very resilient in the battle to hold out for a draw.

In the 89th minute a free-kick from Barry McNamee fell to Seamus Sharkey but the Derry player really should have done better with his header. Town defender Mark Rossiter then did very well in stoppage time to clear McNamee’s delivery as Derry had to settle for a point in the final fixture of the first phase of the 2015 Premier Division season.