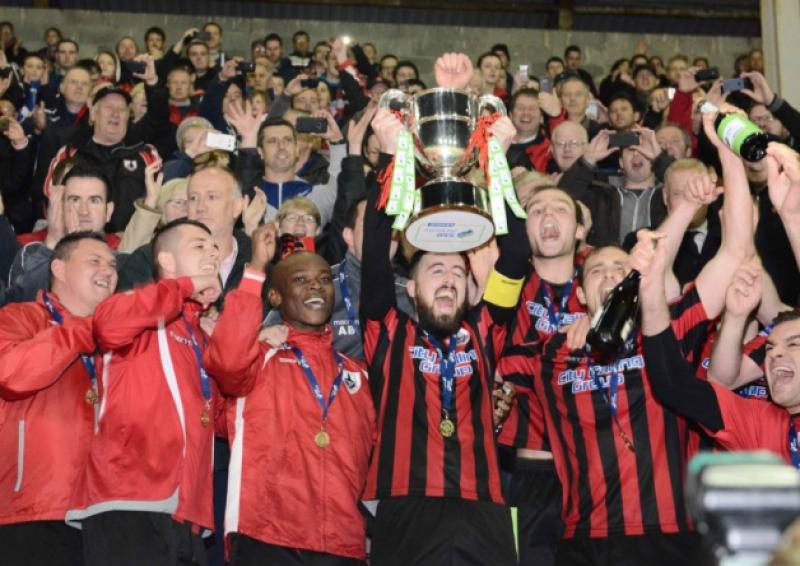 A very big attendance of around 2,200 were in City Calling Stadium on Friday night last to witness history being created as Longford Town won the First Division Championship – their first league title in senior football – and in doing so gained promotion back to the Premier Division after a seven year absence.

A very big attendance of around 2,200 were in City Calling Stadium on Friday night last to witness history being created as Longford Town won the First Division Championship – their first league title in senior football – and in doing so gained promotion back to the Premier Division after a seven year absence.

After the disappointment of the play-off failures in the last two seasons, it was a night of celebration for the club as they were crowned champions. It was indeed fitting that this was achieved in the 90th anniversary of the club’s founding and their 30th year in League of Ireland football.

The chants of ‘we are going up’ and ‘stand up if you’re Longford Town’ rang out around the ground as the clock ticked down. The scenes at the end of the game showed what it meant to the long suffering supporters and the Town players who proved to be the best team in the first division this season.

Without the suspended Pat Sullivan, Longford opened the scoring in the 4th minute when Gary Shaw sidefooted Rhys Gorman’s corner to the net. In the 13th minute a free-kick from Gorman went over the bar while minutes later Lorcan Shannon burst through and played the ball to David O’Sullivan who brought a fine save out of Rovers keeper Conor O’Malley. But from the resulting corner O’Malley somehow dropped the ball with Don Cowan on hand to find the back of the net.

Another Gorman corner yielded the third goal in the 26th minute; Stephen Rice got a touch on the corner and it fell to Shaw who grabbed his second goal on the night to put the issue beyond all doubt.

Rice had a chance minutes later but he put his effort wide. The Town goalkeeper Paul Hunt had nothing to do as Rovers struggled to get the ball such was Longford’s dominance.

Early in the second half, the Town got their fourth goal when Don Cowan latched onto a Tom Morris cross and while his shot was saved by O’Malley, he finished the breaking ball to the net in the 47th minute.

In the 54th minute Shamrock Rovers ’B’ had a chance but Chris Lyons put his shot wide while Rhys Gorman then went close for the home side in the 59th minute from a free-kick.

Two minutes later the Town got their fifth and final goal in this completely one-sided encounter; Rovers keeper O’Malley denied O’Sullivan but the ball came back out to Cowan who crossed for O’Sullivan to score his 20th league goal of the season.

Town substitute Mark Salmon ran onto a long ball in the 68th minute and tried to lob O’Malley but the Rovers netminder did well to make the save.

The youthful visitors tried to create a few chances in the closing stages in their quest for a consolation goal with Dylan Kavanagh’s lob going over the bar in the 81st minute and two minutes later Cian Kavanagh struck a free-kick narrowly off target.

Longford Town manager Tony Cousins dedicated the club’s First Division title win to everyone who made it possible.

“This is for everyone at the club, the chairman Jim Hanley, our sponsor Phil Munnelly, the committee and the supporters. This didn’t happen tonight, it has happened over a course of seasons when we kept improving the club to get them to where we are now,” he told the Leader after the win over Shamrock Rovers B at City Calling Stadium on Friday night last.

Following the disappointment of play-off setbacks in the last two seasons, Longford Town finally made a return back to the Premier Division with automatic promotion and Cousins couldn’t contain his delight.

“It’s fantastic. I’m so proud of the players to make history. I said to them going out that they not only had a chance of winning the league but they had a chance to go down in history. When we are all gone people will remember this team as the first league winners for the club. I’m delighted for them, they really deserved it.”

The win though was tinged with sadness for the Dubliner. “I look at the people around me and that’s where I get my pleasure; my own family. I have been at the club five years and I lost my father during that period. He was one of the biggest influences on my career and I know he would be a very proud man tonight.”

Getting the right type of player was important for the manager. “I brought in lads who would have a great feeling and association for the club. This is their club now. I think there was a great gel between the players and supporters in the latter half of the season when we needed them most. They appreciated the efforts that we were making to get out of the First Division.”