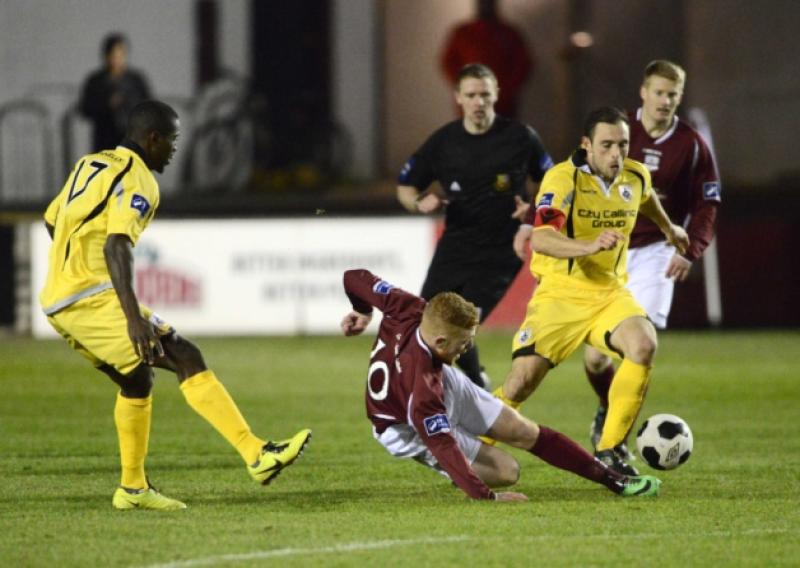 Gary Shaw’s 71st minute goal proved to be decisive as Longford Town beat midlands rivals Athlone in the first round of the EA Sports Cup on Monday night last.

Gary Shaw’s 71st minute goal proved to be decisive as Longford Town beat midlands rivals Athlone in the first round of the EA Sports Cup on Monday night last.

It was a rather poor game at the Athlone Town Stadium with neither side really getting a proper hold on the game. Both sides had chances throughout with Longford having the better of them.

In a dour first half it was Longford who had the first opportunity to break the deadlock; Kevin O’Connor’s low drive in the 4th minute hit the butt of the post, rolled along the line but Athlone were able to clear the danger.

Longford created a few half chances after that while Athlone’s best effort came in the 25th minute through Kealan Dillon but instead of taking the ball down he decided to shoot and blazed his effort over the bar.

Down the other end David O’Sullivan shot over the bar and then in the 29th minute another great chance fell Athlone’s way. Graham Rusk was through but Longford keeper Paul Hunt did very well to rush out of goals and put the player off and the chance was gone for the home side.

In the 31st minute Kevin O’Connor’s rasping shot got a slight deflection out for a corner. And then four minutes from the break Longford had the ball in the back of the net but Lorcan Shannon’s effort was ruled out for offside. Unfortunately for Longford it was the right call.

Dillon had another opportunity in the 55th minute for Athlone; a long ball forward from James O’Brien fell to Dillon who lobbed a shot over Longford keeper Paul Hunt but it bounced just wide.

As the game wore on Longford came more into it and began to put pressure on the Athlone defence. That paid off in the 71st minute when the deadlock was eventually broken. O’Sullivan’s shot was parried by Athlone keeper Craig Sexton but the loose ball fell to Gary Shaw and he made no mistake with a powerful strike.

Minutes later O’Sullivan could have doubled his side’s advantage but Sexton denied him with a good save.

In the final few minutes Athlone pressed hard to get an equaliser to bring the game to extra-time. Their best chance fell one minute from time when O’Brien’s shot was expertly tipped over the crossbar by Hunt, from the corner the ball fell to Conor McMahon but he shot over.