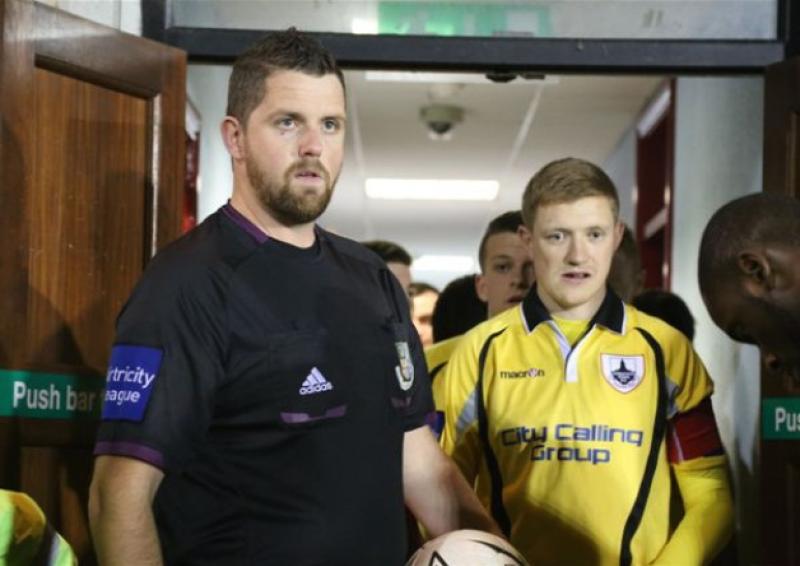 Longford Town face possibly their biggest game since 2001 when they played their first ever FAI Cup final as they entertain Johnny Glynn’s Mervue United in a winner take all game.

Longford Town face possibly their biggest game since 2001 when they played their first ever FAI Cup final as they entertain Johnny Glynn’s Mervue United in a winner take all game.

Admittedly the Galway side come to Longford with a one goal advantage by virtue of Jason Molloy’s cracking goal after 14 minutes at Fahy’s Field on Friday night last. Worse was to follow for the Town when Corie Tracey, who was just returning to the team following suspension, was shown a straight red card by referee Keith Callinan who not for the first time this season gave some terrible decisions against the Town.

It was a bad night for the Town as before the kick-off they lost Rhys Gorman who failed a late fitness test. That was an awful blow to Tony Cousins as he tries to guide the Town to the promised land – the Premier Division. The list of injuries seems to increase rather than decrease and as stated on many occasions previously the loss of team captain Mark Salmon has had a serious effect on some of the performances of late. The experience of Keith Gillespie is also missed.

It’s not all doom and gloom for the club as the players who have come into the team have acquitted themselves well and hopefully they will push us over the line on Friday night next. When our team take down the ball and play good attacking football they can match any team in the league.

The return of Keith Quinn after suspension has given the team the extra strength going forward. The defence has done well in recent weeks despite the absence of Willo McDonagh and Willie Tyrell.

A lot will depend on how we perform in the early stages of next Friday’s game – we need to settle down from the kick-off. Former Town players Tom King and Gary Curran will no doubt look forward to returning to the Longford grounds while Ryan Manning has a host of cross channel clubs chasing his signature as he is definitely the find of the season.

Providing that the Town get through on Friday night they will be on the road on Monday or Tuesday night next to meet the eventual second bottom team in the Premier Division. As it stands at the moment Bray are in the play-off spot but UCD who are on the same points as Bray while Bohemians who are two points ahead of both clubs and could be dragged into the play-off spot. Shelbourne were relegated on Friday night last when Bray beat Bohemians at Dalymount Park on a one nil scoreline.