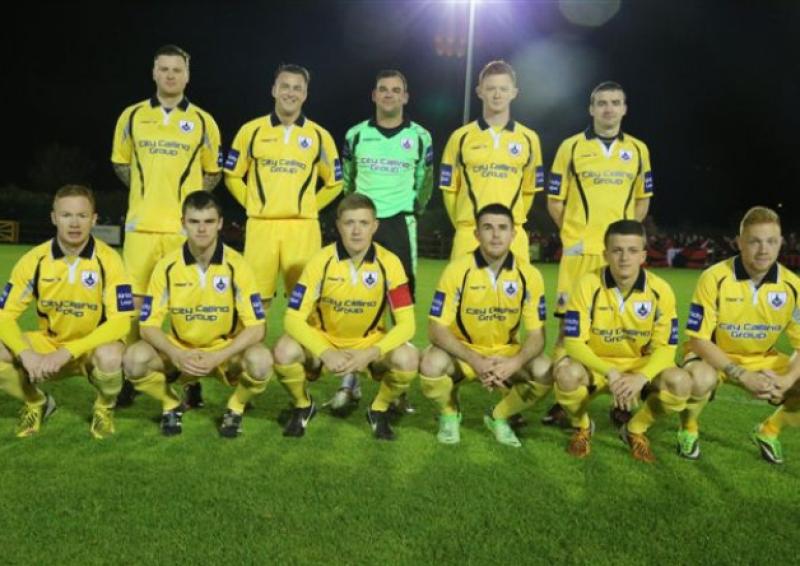 It is advantage Mervue United in Part 1 of the First Division promotion play-off after the Galway club defeated 10 men Longford Town in front of the official attendance of 607 at Fahy’s Field on Friday night last.

It is advantage Mervue United in Part 1 of the First Division promotion play-off after the Galway club defeated 10 men Longford Town in front of the official attendance of 607 at Fahy’s Field on Friday night last.

Jason Molloy’s excellent strike in the 14th minute was the difference between the sides as the Town had to play 65 minutes of the game with 10 men after Corie Tracey received a straight red card, returning from a two match suspension after getting sent off against Mervue three weeks previous.

It meant that the Town had to re-shuffle things and Gary Shaw switched to the wing with David O’Sullivan being the lone striker. Longford were poor in the first half with Mervue deservedly taking the lead and should have added to that goal while in the second half Tony Cousins side upped their game. And right at the end they could have snatched a dramatic equaliser when Gary Shaw’s powerful header came crashing off the crossbar and Des Hope was unlucky with the follow-up.

Longford were dealt a blow before the start with midfielder Rhys Gorman failing a late fitness test and he was replaced by Derek O’Brien. The visitors could have found themselves 1-0 down after just five minutes when Gary Shanahan’s effort bounced off the crossbar and went over.

Minutes later Michael Duffy had another chance for Mervue when through on goal but he shot straight at Town keeper Chris Bennion. Four minutes later Bennion was beaten when Jason Molloy’s curling shot from over 25 yards out hit the top corner of the net.

After being completely out of the game Town had a great chance to level in the 23rd minute but Ryan Connolly’s shot came off the underside of the post. Three minutes later they were reduced to 10 men when Tracey was sent-off. Mervue continued to create chances just before the break but Bennion was equal to their efforts.

The Town began to come more into the game in the second half. In the 52nd minute David O’Sullivan brought a great save out of the home keeper Conor O’Malley. Mervue then had two more chances before O’Sullivan had an opportunity in the 65th minute but his low shot went the wrong side of the post.

In the 74th minute Mervue should have doubled their lead but Ryan Manning’s effort was cleared off the line by Glenn O’Connor while in the 88th minute Town keeper Bennion denied substitute Brendan Lavelle.

Three minutes into stoppage time Gary Shaw was unlucky to see his header come off the crossbar as Mervue held on for a valuable win. It’s only half-time in this tie and Longford Town will hope to turn things around in the second leg this Friday night at City Calling Stadium.